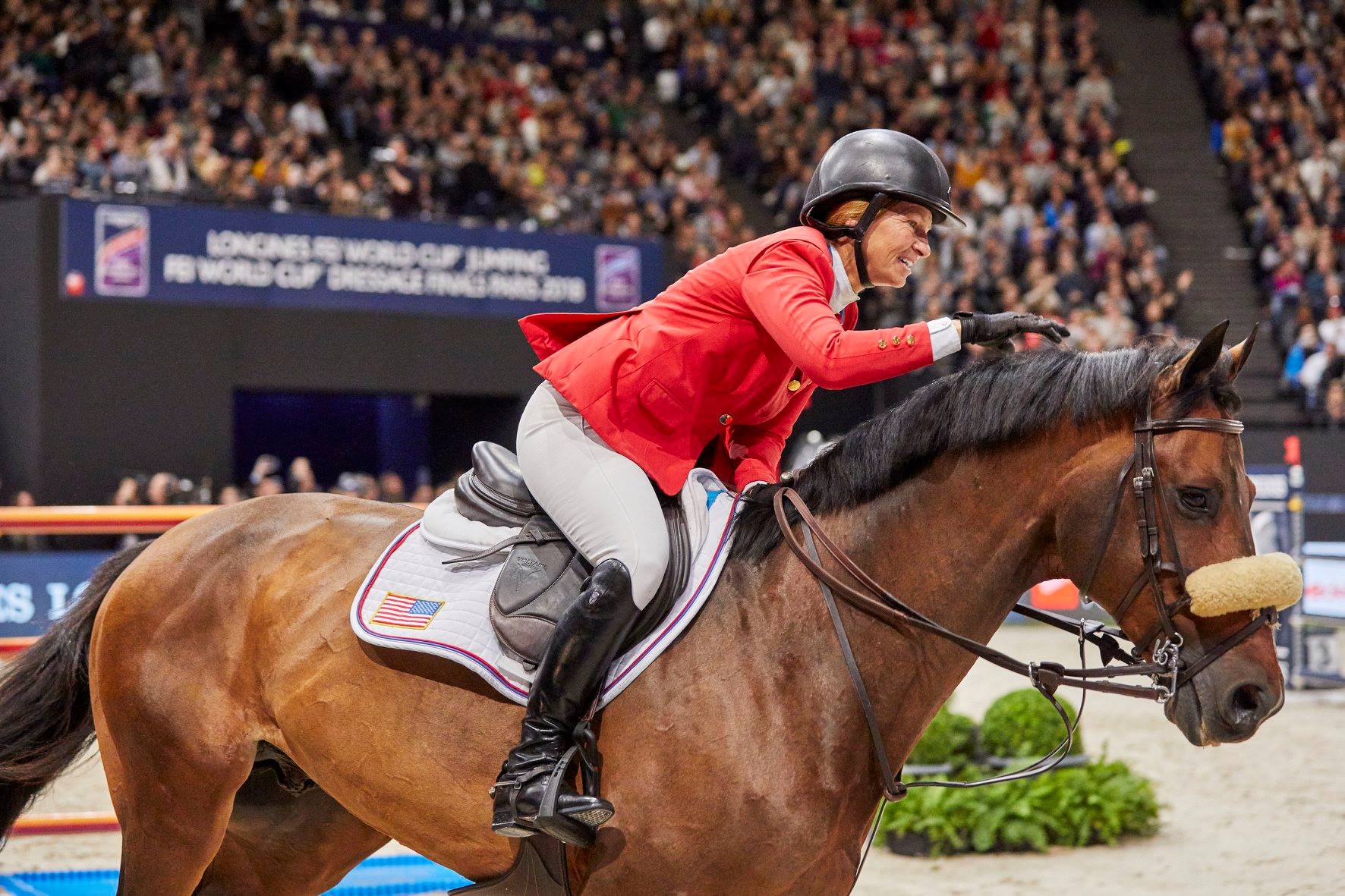 The showjumping world is full of hair-raising stories and legendary horses and riders – and Beezie Madden is one rider who has certainly had her fair share of unforgettable mounts and moments! The American show jumper was the first woman to earn over $1 million in show jumping, the first woman AND the first American rider to reach the top three on the world rankings, and the first woman to win the prestigious King George Gold Cup (twice, consecutively!). As part of the American Olympic team, she has won two gold medals, a silver and a bronze, and she was also the first rider to win the USEF Equestrian of the Year award FOUR times!
This very brief introduction to Beezie’s long list of achievements goes some way towards explaining how influential she has been on the show jumping scene over her long career; but if we want to do her justice, we have to start at the beginning. 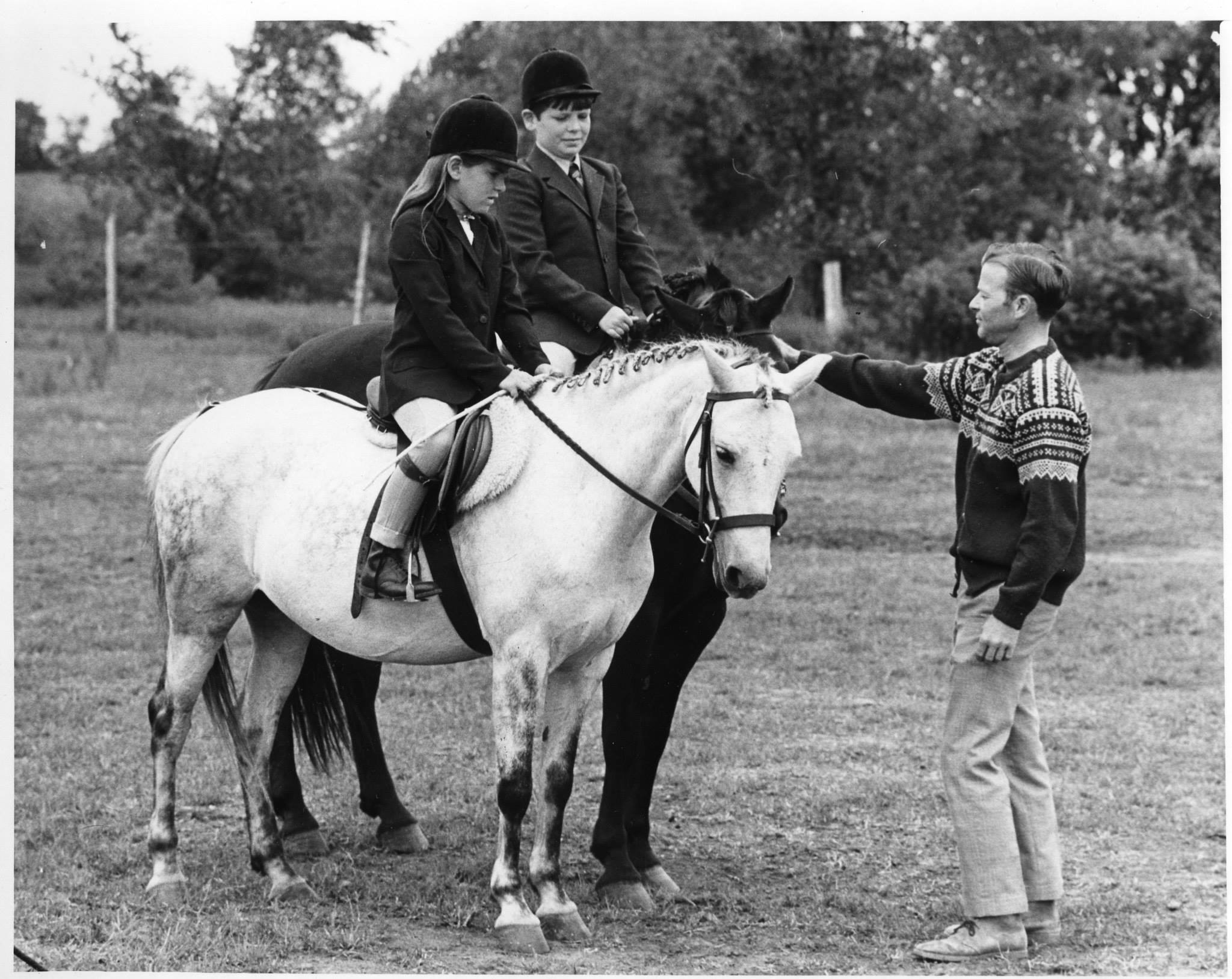 Elizabeth ‘Beezie’ Madden was born in 1963 and grew up on her parents’ horse farm in Wisconsin. She began riding at age three, receiving her first pony as a Christmas gift at age four. The pony only came with a bridle, however; in order to earn a saddle, she had to prove that she really wanted to ride! Having accomplished this, Beezie more or less stayed in the saddle throughout her entire childhood. She rode competitively for her junior college and was accepted into the University of Virginia, but while she was struggling to choose her major, she was offered a working student position with Olympic gold medallist and international coach, Katie Monahan Prudent. She worked and learned under Katie for more than five years, making her Grand Prix debut at age 22, before leaving in 1987 to work in… a sales yard! This was a HUGE risk, but it paid off a hundredfold – not least, the owner of the sales yard, John Madden, has been her coach ever since – and since 1998, her husband!

Two years after Beezie began working in John’s sales yard, she had proven her worth as a disciplined and hard-working rider with a gift for bringing out the best in every horse. She and John decided it was time to make their European debut. They spent Beezie’s life savings on one-way tickets for themselves and two horses, the idea being that they had to win in order to afford tickets home! They debuted at one of the biggest shows in Europe – the Samsung Nations Cup in Rome – where Beezie had the only double clear performance of the entire day. From there, they carried on with much the same success, competing at all the biggest shows and surviving on winnings alone. John spent most of his nights at the stables, and recalls, ‘Beezie, she sort of slept wherever we could find. Some of the shows gave her a hotel room. Other shows, I think she stayed with friends or in people’s trucks.’

Having conquered some of the toughest courses in Europe, Beezie and her horse Northern Magic were put on the US team for the most prestigious competition of all: Aachen. Yet even these monstrously huge jumps weren’t enough to faze her! After lining their pockets with prize money from this and many more shows, Beezie and John finally had enough money to return home, marking their European debut down in the books as a huge success. And in case there was any doubt, the United States Olympic Committee named Beezie the 1989 Female Equestrian Athlete of the Year. 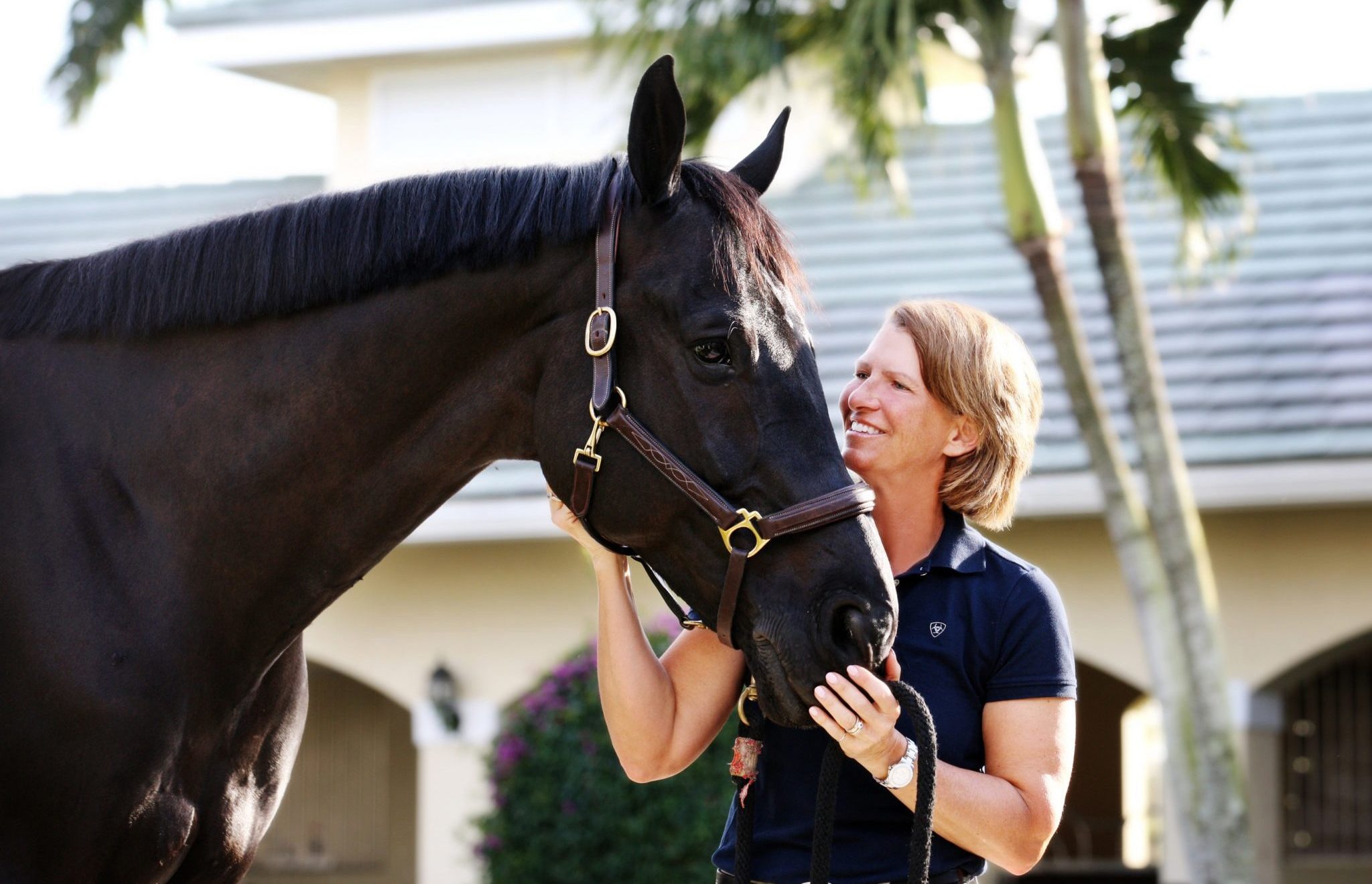 Back in the US, John and Beezie carried on training, selling and competing, gradually making a name for themselves and enjoying various less penny-pinching international tours, with Beezie competing in both individual and team events. In 2004, she made her Olympic debut on a very special horse called Authentic, affectionately known as Bud. The pair took home team gold, and repeated the feat four years later in Beijing! Beezie and Bud enjoyed many successful years together, adding the US team’s first ever Samsung Super League Nations Cup, individual and team silver at the 2006 World Equestrian Games, two USEF Show Jumping Horse of the Year awards and one Horse of the Year award, and the Aachen Rolex Grand Prix to their belt before Bud was retired from jumping in 2009.

A particularly successful 2013 season saw Beezie ranked 4th ranked rider in the world and number one female rider in the FEI Longines Rider Rankings, and despite breaking her collarbone in May 2014, she was back in the saddle in time to win the King George V Gold Cup aboard Cortes ‘C’ in August! Cortes ‘C’ continued on in great form to win team and individual bronze at the World Equestrian Games a few weeks later, being awarded Best Horse of the Games for his efforts. Beezie didn’t do too badly that year, either, winning her fourth USEF Equestrian of the Year award and breaking another record in the process.

Another particularly memorable mount was Simon, pictured below. The pair won the 2013 Show Jumping World Cup, came 7th in 2013 and came 4th in 2015, took the US team to victory the 2013 FEI Nations Cup, and won the 2015 Del Mar World Cup Qualifier. Like Authentic, Simon was awarded the USEF Horse of the Year award during his illustrious career. 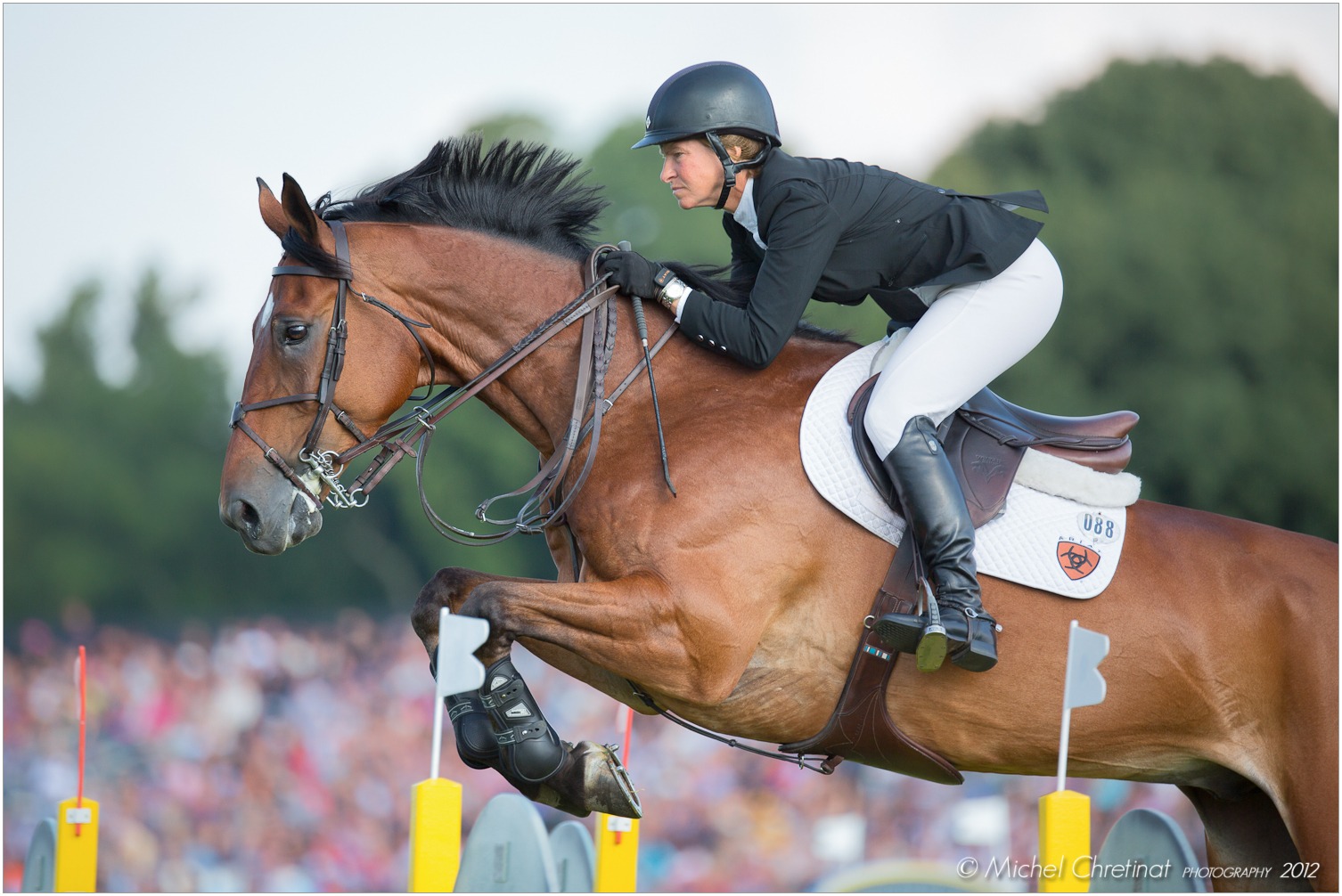 Beezie, John and their team are strong supporters of responsible retirement for competition horses, and many of their equine partners have retired to their farm, including Authentic and Simon (now best friends and weanling babysitters), Northern Magic, Cloud Nine, Coral Reef Via Volo, Prima and Conquest II. Coral Reef Via Volo, a highly successful mare, has produced some beautiful foals since retiring from competition, and many of the farm’s champion stallions have also gone on to be outstanding sires.

As for Beezie, at age 55 she shows no sign of slowing down. She has four students and largely divides her time between Wellington and Spruce Meadows in the US and equestrian centres in the Netherlands and greater Europe, with the very occasional day at home on the farm. Most recently, she’s won her her second Rolex Grand Slam, this time aboard a handsome flaxen chestnut called Darry Lou. Other exceptionally talented horses in her stable include Belgian Warmblood mare Jiva, Holsteiner gelding Coach, Dutch Warmblood gelding Garant and Dutch Warmblood stallion Breitling LS, with whom Beezie won the 2018 World Cup. Naturally, this victory scored her more records: the first woman to win the competition twice, and the oldest rider ever to win.