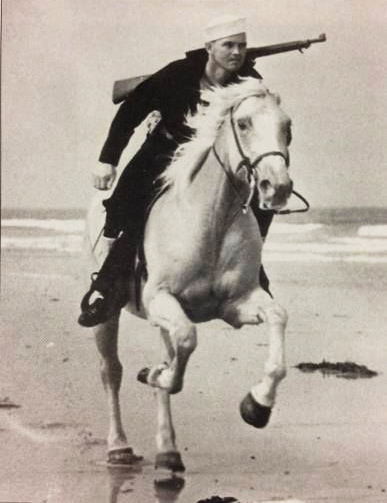 This image shows the Coast Guard Beach Patrol on duty in Virginia during World War II. At its height, the Beach Patrol employed about 24,000 men aged 17 to 73, protecting 3,700 miles of coastline from potential enemy invasion. The Beach Patrol began in June 1942 and lasted until preparations began for the Normandy invasion in 1944, when most of the men were called away for sea duty. The Beach Patrol had three main objectives: to detect, observe and report offshore enemy vessels; to report enemy landing attempts; and to prevent people on land from communicating with the enemy at sea.

Coast guards would frequently be mounted on horses or accompanied by dogs, and were armed with radios, compasses, whistles, pistols and rifles. Horsemen worked in pairs, riding about 100 feet apart and covering a two-mile stretch of the coast quickly and efficiently. Known as ‘Sand Pounders’, their presence gave American citizens a much-needed sense of security at a time when the threat of German coastal invasion was very real.