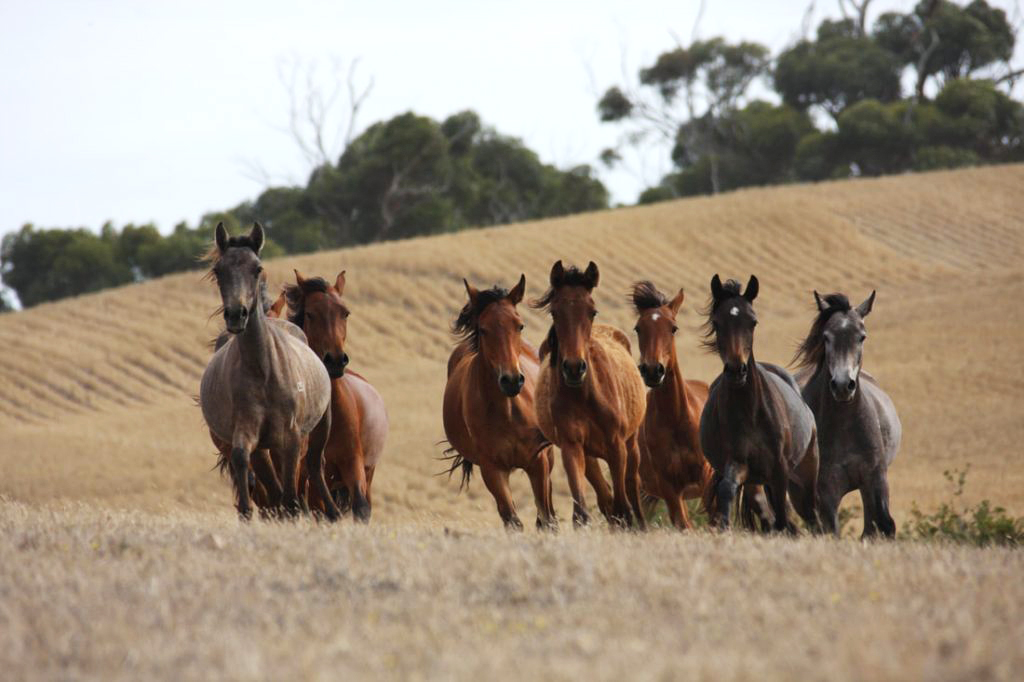 Breed origin: The Coffin Bay Pony’s story begins in 1839, when Captain Hawson transported around 60 Timor Ponies from Sumatra to the Eyre Peninsula in South Australia. He intended to use the ponies for breeding, and in 1847 all of the ponies were moved to Coffin Bay Run, where their numbers could grow safely on the wide expanse of land. About ten years later, Coffin Bay Run was bought by W.R. Mortlock, who was greatly impressed by the small, hardy ponies. He introduced stallions with Welsh Cob, Thoroughbred and Arabian bloodlines to increase the ponies’ height and versatility. And that it did – the ponies of Coffin Bay were sought out by owners all around Australia and used as everything from army remounts to polo ponies.
However, in the early 20th century, the need for horses had decreased and Coffin Bay Run was overpopulated with a semi-wild, uncontrollable herd. Mass culling was undertaken to reduce the population. World War II, the Great Depression and a change of ownership reversed the breed’s fortunes, with demand for working horses at an all-time high. But this was not to last. The Coffin Bay Ponies faced ever-changing conditions throughout the 20th century, from high demand to threatened eviction from Coffin Bay Run. By the 1980s, many locals regarded the ponies as an integral and natural part of the environment. The Coffin Bay Pony Society was formed to protect the breed and allow for negotiations with the government, which considered the ponies a pest in what was by then a national park. In the early 90s, the first management agreement was reached: the breed’s historical value was recognised and the ponies were allowed to stay in the Run. Maintenance of a herd of 20 mares, their offspring and one stallion was agreed upon. From then on, an annual round-up has been conducted to remove the excess stock, which are first handled, then auctioned.
In 2003, despite a huge public outcry, the Coffin Bay Ponies were deemed unwelcome in Coffin Bay Run. With the ponies’ future hanging on a knife’s edge, the Coffin Bay Pony Society managed to negotiate and raise funds for the purchase of a nearby plot of land. The ponies were moved to their new home in 2004. Brumby’s Run was established in 2008, allowing the breed’s custodians to maintain the herd and handle the horses to be auctioned with minimal interference in the wild horses’ lives.

Distinguishing features: There are two main types of Coffin Bay Pony: a lighter saddle type, and a strong-boned Galloway suitable for both driving and riding. Coffin Bay Ponies are hardy, friendly and intelligent. They have strong bones and hooves, good hindquarters, short, clean legs, and a kind eye. All solid colours are seen and their height varies, but is never above 14.2 hands high.

Modern day Coffin Bay Pony: The Coffin Bay Pony is now a protected wild horse breed. The carefully selected ponies sold in the annual auction are much loved as riding ponies for children and small adults. They are suitable for a range of disciplines and also excel under harness.