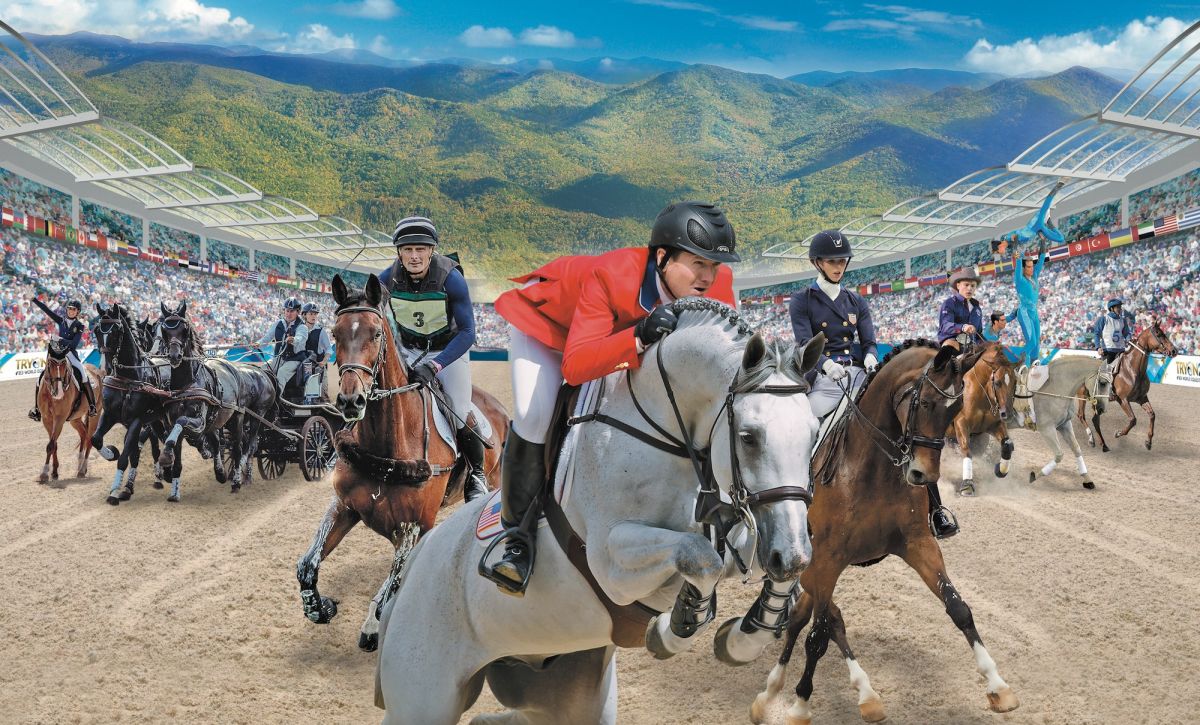 The FEI World Equestrian Games are held every four years, in the middle of the Olympic cycle. It is one of the biggest events on the global equestrian calendar, with eight disciplines included in the programme and over 700 riders set to compete this year. The 2018 Games will be held from the 11th to the 23rd of September in Mill Spring, North Carolina, USA. Tryon Equestrian Centre will host 29 individual events, covering dressage, para-dressage, eventing, jumping, endurance, driving, reining and vaulting. Before the inception of the World Equestrian Games, all ten FEI disciplines held individual championships, often in separate countries. Now, only horseball and tent pegging run separate championships. With eight championships in one, national equestrian organisations have been better able to pool their resources to send over stronger teams. This year, Australia is sending 30 athletes (that’s not counting the horses!) to compete. Let’s take a closer look at the equestrian sports featured at the WEG.

Dressage
The intricate dance performed by a perfectly in-tune horse and rider is a beautiful thing to behold. This year, spectators will have the chance to watch the Grand Prix, Grand Prix Special, and Grand Prix Freestyle. The Freestyle event is expected to pack out the 20,000-seat stadium as competitors perform complicated choreography in time to a piece of music.

Para-dressage
The para-equestrian dressage events include individual and team competitions, with riders grouped according to their functional abilities to ensure non-biased judgements of their performances. Emma Booth and the Danish-bred Mogelvangs Zidane will be representing Australia in para-dressage.

Eventing
Combining dressage, show jumping and cross country, the WEG three day event will test horses and riders to the extreme. Dressage will be conducted on the 13th and 14th of September, cross country on the 15th and show jumping on the 16th.

Show Jumping
The average fence height at the WEG show jumping competition will be 1.6 metres, with competitors aiming to get through the course with a clear round in the quickest possible time. Team and Individual medals will be awarded this year, and Australia has four horse-rider combinations lined up.

Endurance
Endurance rides are the ultimate test of a horse and rider’s bond, stamina and speed. The WEG endurance course is 100 miles long, covering many different terrains. Frequent vet checks and rest periods will ensure the welfare of all competitors. Four pairs of horses and riders are coming from Australia to compete, as well as one reserve.

Driving
In driving, four horses pull a carriage. There are three elements: Dressage, in which teams must complete a test in unison; Marathon, which harks back to Roman chariot racing as teams race around an obstacle course as fast as they dare; and Cones, in which teams must navigate around a set of cones without knocking any of the carefully-balanced balls resting on their tops.

Reining
In reining, horse and rider must complete a pre-approved pattern of manouevres designed to test the skills needed in traditional cattle reining work. The patterns involve a combination of small slow circles, large fast circles, flying lead changes, rollbacks over the hocks, a series of 360 degree spins done in place, and of course sliding stops.

Vaulting
Vaulting is best described as horseback gymnastics, with vaulters performing a routine from the back of a horse cantering on a lunge line. Judges look to see the compulsory movements executed with strength, fluidity, balance and flexibility. The WEG competitions will include Men’s, Women’s, Team and Pas de Deux (doubles).

As well as the Games themselves, a range of demonstrations, workshops and exhibitions will be on offer throughout the thirteen-day programme. The World Equine Expo will run concurrently at Tryon, celebrating horses and horsemanship with a trade fair, clinics, panel discussions, educational seminars, demonstrations, an art and film festival and competitions.

Are any of our globetrotters catching the action in North Carolina this year? Let us know in the comments or on Facebook, we’d love to hear your stories!