We flew down to Tasmania a couple of weeks ago to road test a new ride called the Tassie Tiger Trail. I’ve been busting to share our adventures of the Apple Isle and our thoughts on this ripping riding destination. Both Steven and I were Apple Isle virgins and since taking our first bite we’re wanting to explore this island to its core and spit out the pips! Love, love, love everything about this pint-sized island from the happy-go-lucky locals to the copious amount of gourmet fare to the breathtaking and pristine scenery.

We hired a Suzuki Swift at the Launceston airport which was way too small for our two suitcases, pram, camera bag and port-a-cot. Poor little poppet was surrounded by luggage stacked like tetris blocks around her. For this particular trip we found it easier to hire a car as it gave Steven the independence and freedom to go into the township of Deloraine or meet us in between rides rather than being house-bound.

As soon as we touched down in Tassie we both felt as if we had entered sacred territory. A kangaroo hop from the airport and you’re transported into chartreuse green pastures. Upon arrival it was a crisp 8 degrees with china blue skies and whispers of cloud strewn across the sky. With Finn sitting in her car seat chewing on Mr Twiga, we scooted past paddocks flanked in Poplar trees home to pink-skinned sheep stripped naked of their woolly jackets.

The car windows were down, allowing the alpine air to flood in. We passed secluded country lanes that were screaming to be explored.

In the early evening we arrived at our hosts’ farm, known as Gem Farm, and were greeted by Jeremy Ford and Jen Clingly, a blazing fire and a bottle of red wine. Gem Farm is a 30-acre property that sits an easy five minute drive from the riverside town of Deloraine. The modern homestead overlooks expansive grazing paddocks fringed by native scrub.

I was introduced to Jen and Jeremy’s well-mannered, naturally-trained horses, who were gleaming with health and physicality. The couple have an admirable ethos when it comes to training and interacting with their equines. The following morning I had the opportunity to do some ground work with Ruby Running Bare, my horse for the day, a top-notch endurance horse who has won her fair share of races. Jen and Jeremy believe it’s a great way to break the barrier down between horse and rider before jumping on for a three hour trail ride. Nervous riders have the opportunity to handle their horse on the ground, lead them over the obstacle course that Jeremy has built in the bush, therefore gaining the respect on the ground before asking in the saddle.

Here are some images of the first morning at Gem Farm: 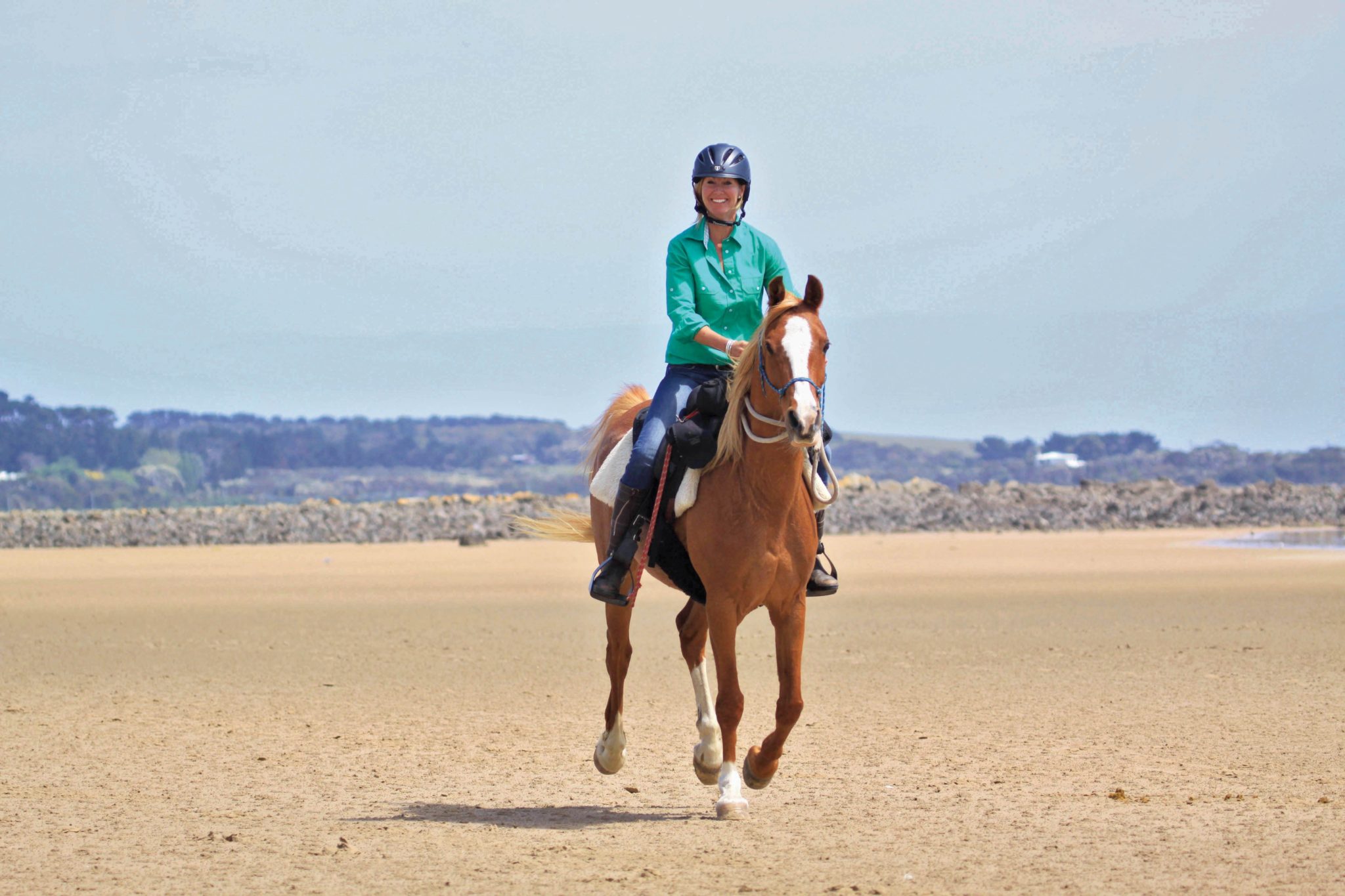 Owner and guide, Jenny, doing some liberty training in the arena at Gem Farm.

Leading the horses through the purpose-built obstacle course was a great ice-breaker for me and Ruby Running Bare.

“We always do a pre-flight on our horses before riding to make sure they’re sound and ready for work,” says Jeremy.

After completing the obstacle course and running the horses through their paces on the ground, we mounted up. Within seconds of leaving the farm we were surrounded by towering eucalyptus-scented gums that enveloped forestry trails. These trails are Jeremy and Jenny’s training ground where they put hours upon hours of saddle time on their horses to get them fighting fit for endurance. There we twisted and turned on trails that vein through the bush and I quickly lost my sense of direction. A lovely three hours was spent exploring the native bush that was screaming with life. Fast-paced canters were had up hills. Mr Wendall, their pooch, followed enticing scents and we disturbed an echidna as he crossed the trail. For my first taste of riding in Tasmania I was truly impressed.

Jenny leading the way, wildflowers added life and colour to the native scrubland, clearing the trail. 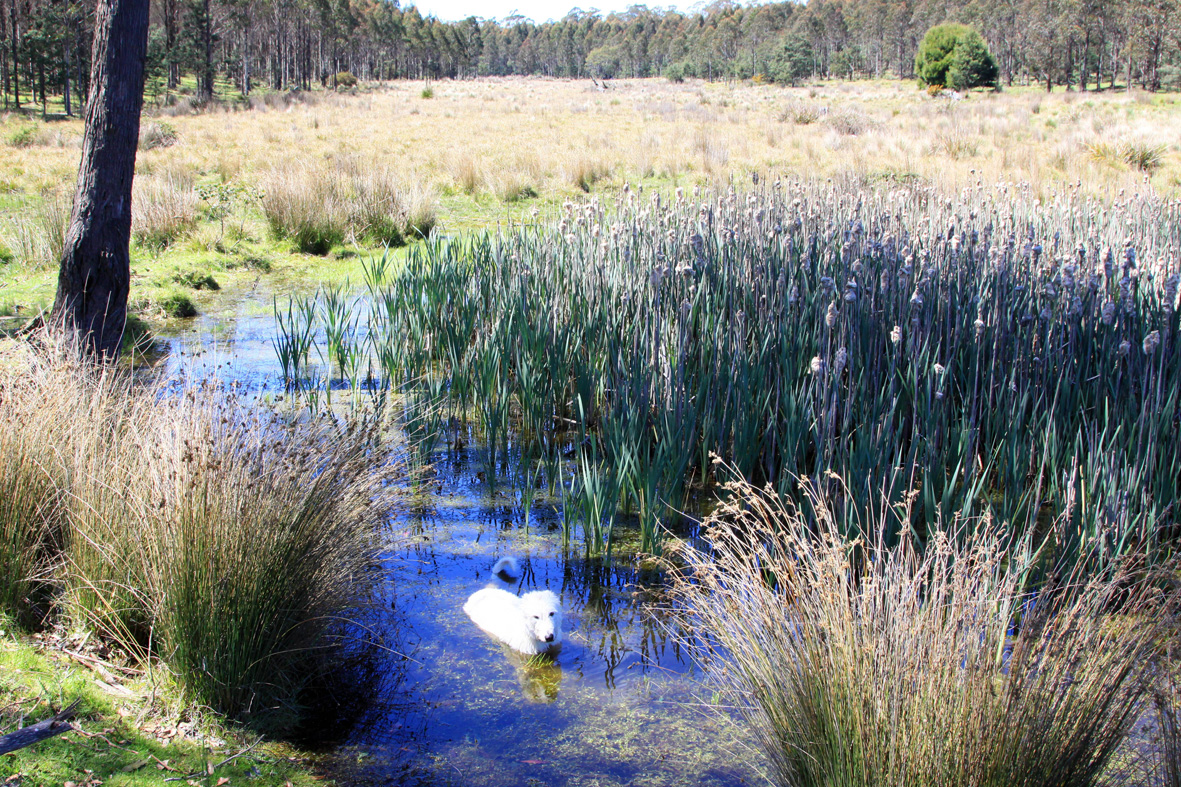 Mr Wendall enjoying a boagie in the lagoon.

In the afternoon after enjoying a light lunch we jumped in the car to visit Liffey Falls. With Finn strapped to my chest in the Baby Bjorn, cameras in hand, we walked along the well-worn tracks to the tiered falls. It was such a lovely stroll, tip-toeing through 300-year old ferns, passing wide-girthed stumps remnants of timber felling days gone by.

I was tempted to take a dip in the translucent water until I knelt down and felt the water temp. Icy, to say the least.

Steven and I loved playing with the filtered light and the mist from the falls to capture these shots.