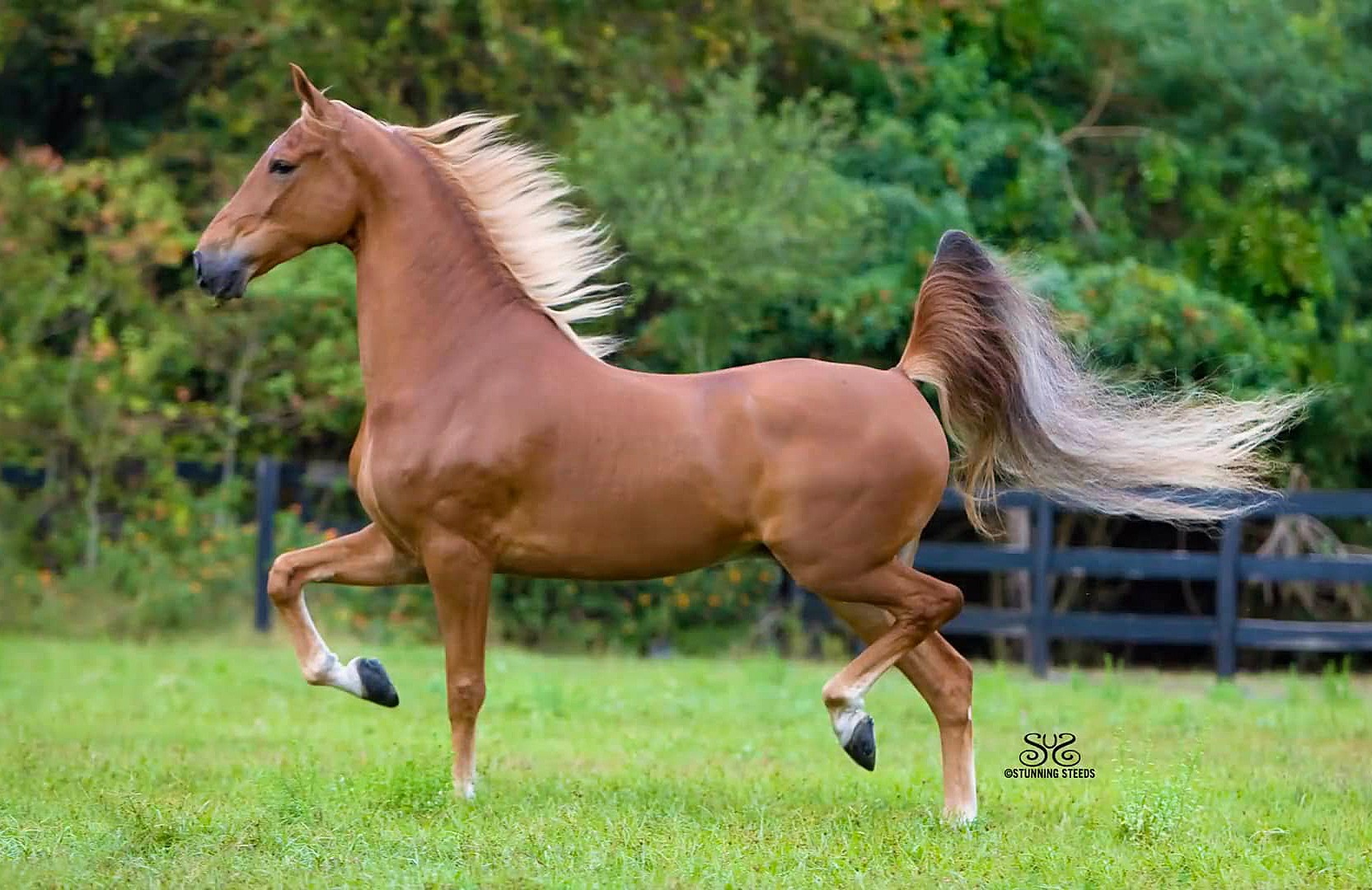 Breed origin: The American Saddlebred is known as ‘The Horse History Made’ because its development has been so closely tied to the needs of the nation over the centuries. Its story begins at the beginning of the 18th century, when Thoroughbreds were imported to the North American Colonies and crossed with a recently developed colony breed, the Narragansett Pacer. The Narragansett Pacer was bred as a smooth, elegant riding horse and was very popular in the American Colonies, being exported to other New World colonies in huge numbers. The breed had a thick mane and tail, a long, high-set neck, proud head and tail carriage, slim body and limbs and a comfortable, eye-catching action. When crossed with Thoroughbreds, these qualities were retained within a larger, more athletic body.
When these horses went west with the pioneers, Morgan and Arabian blood was introduced, as well as more Thoroughbred blood, to further refine the breed. This type of horse became so common that its features were hardly even recognised until the American Civil War, being known simply as the American Horse or the Kentucky Saddler. Commanders frequently chose these horses as their personal mounts, the best-known being the Confederate general Robert E. Lee’s grey stallion, Traveller.
After the Civil War, the entire nation was scrambling for these horses, which had proven themselves so strong, courageous, fast and comfortable during the war. Soon enough, shows and exhibitions were being held on the regular, and in 1891 the National Saddle Horse Breeders Association (now the American Saddlebred Horse Association) was founded – the first organisation for an American horse breed. As time passed, the emphasis changed from producing an all-purpose saddle horse to producing a beautiful, elegant and flashy horse for the show ring. This proved to be a good move for the breed, which to this day continues to gain popularity thanks to its combination of stunning beauty and athletic versatility.

Distinguishing features: The American Saddlebred is known as the ‘peacock of the horse world’ thanks to its beauty, show-stopping action and proud disposition. The breed’s best-known characteristic is the two extra gaits which many (but not all) American Saddlebreds can perform naturally: the ‘slow gait’ and the ‘rack’. Both of these gaits have four beats and are very comfortable for the rider, with a high-stepping action that can be made more pronounced with special shoes. Other distinctive features of the breed include their very fine head, which is held high on their long, arched neck, their strong back, straight and clean legs, and long, flowing, high-set tail. All colours are seen, with chestnut, bay, brown and black being the most common. American Saddlebreds typically stand between 15 and 17 hands high. They are willing, easy to train, intelligent and sound, able to be used for a huge variety of disciplines.

Modern day American Saddlebred: The breed is now mostly used in saddle seat competitions, competing in five primary divisions: Five-Gaited, Three-Gaited, Fine Harness, Park and Pleasure. In each of these divisions, they are judged on performance, manners, presence, quality and conformation. As well as being shown under saddle and in harness, American Saddlebreds have found success in dressage, combined driving, Western disciplines, hunting, jumping, endurance, and pleasure riding.