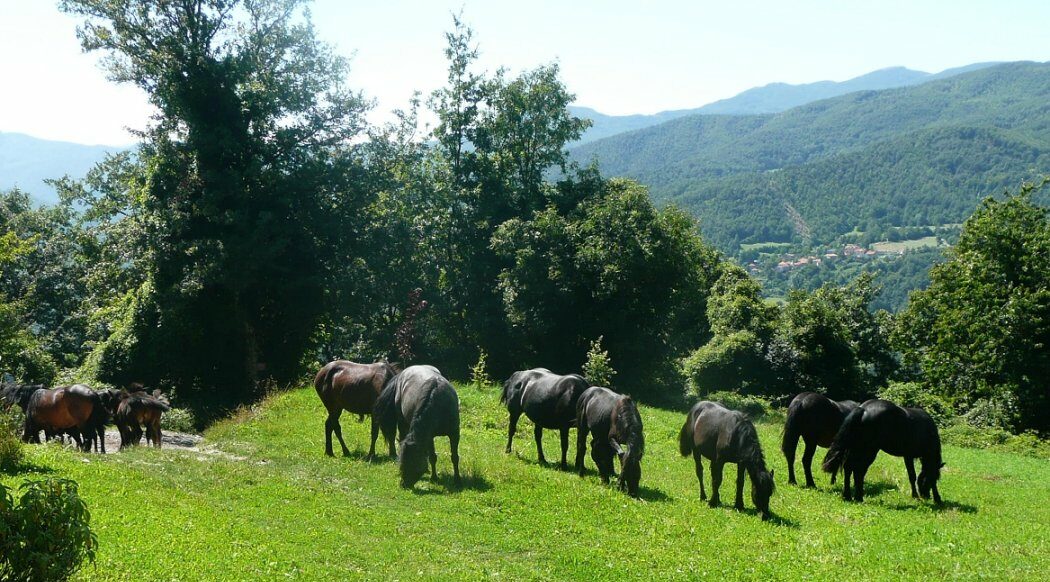 Breed origin: The Bardigiano is a small breed of horse named after the town of Bardi in Italy’s Emilia Romagna region. It is thought to be descended from horses ridden by Belgian Gauls who invaded Italy during the Roman era. The horse of the Gauls is also thought to have produced the Haflinger, which was developed in Northern Italy and Austria and has several similarities to the Bardigiano. The Bardigiano shares many characteristics with the English Exmoor and Dales Ponies and the Asturcón horse of Spain, as well. Over the centuries, the Bardigiano adapted to the mountainous terrain surrounding Bardi, becoming more robust, hardy, surefooted and agile. Locals also bred for temperament, as they needed horses that could be trusted with children as well as being willing and trainable for a range of everyday tasks.

During World War I and II, Bardigiano mares were used to produce first-class mules, and in the process the number of purebred Bardigianos significantly declined. Following WWII a number of stallions from various different breeds were introduced in an attempt to re-establish the breed, but this led to a decrease in the breed’s overall quality. Thankfully, around the same time, small herds of purebred Bardigianos were discovered, having been preserved by local mountain agriculturalists. In 1977, the breed was officially recognised in an attempt to preserve and document their bloodlines. There are now over 3,000 registered horses spread across 26 Italian provinces, although the gene pool is still considered at risk.

Distinguishing features: Bardigiano horses generally stand between 13.2 to 14.1 hands high, which should classify them as ponies; however, they are always referred to as horses. They are strong, sturdy, agile, surefooted and docile. The only recognised coat colour is bay, with dark bay being preferred. While other colours do occur (chestnut, light bay, etc) these are not officially recognised by the studbook, being most likely a result of the post-war influences of other breeds. Large white facial markings are also not permitted. Bardigianos have a small head with a straight or concave profile and a protruding upper lip, an arched neck with a wide base and a thick crest, low withers, a deep girth and a straight back. Their legs are slim yet powerful and they have very hard, large hooves.

Modern day Bardigiano: Now widely distributed in Italy, the Bardigiano is represented by breeders in 26 Italian provinces. While the breed isn’t at risk of extinction with a population of over 3,000 individuals, they are classed as vulnerable. They are used for a variety of activities including farm work, trekking, equestrian tourism, and competitive driving and riding. Their gentle nature also makes them perfect for equine therapy and as children’s mounts.