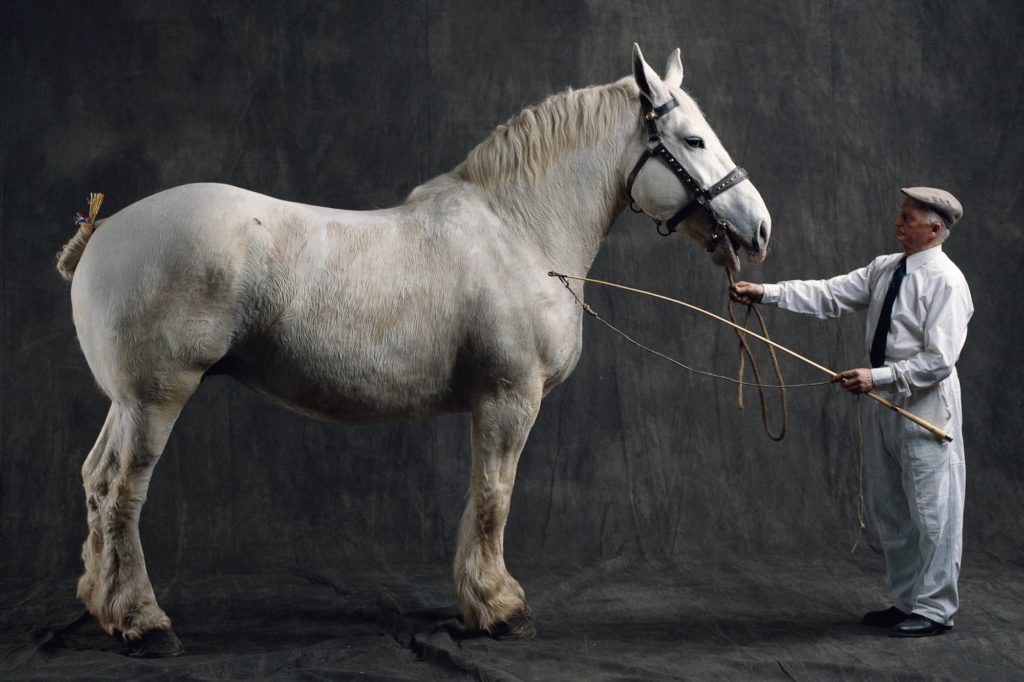 Breed origin: Also known as the ‘White Marble Horse’, the Boulonnais is a French draught horse. The breed’s origins predate the Crusades, but the details are the subject of much debate. What is known is that during the Crusades, a strong, fast and agile war horse was developed, probably by crossing native French stock with horses of oriental and eastern bloodlines that were brought to France by the invading Roman armies. More Arabian stock, as well as Mecklenburg horses from Germany, were then introduced to further refine and strengthen the breed. Finally, in the 17th century, Spanish Barb, Andalusian and more Arabian bloodlines were added to create the modern-day Boulonnais.

From the beginning, the Boulonnais was a very popular breed, with horse dealers coming to the Boulogne region to buy the local horses for far-flung markets across the length and breadth of France. Initially, several types of Boulonnais were developed, being slowly refined to two types by the 19th century: a heavier type suitable for agricultural and industrial work (as well as the meat market) and a lighter, smaller type that was often used to transport cartloads of fish from Boulogne to Paris. This was a turning point for the breed, which until this point had been predominantly black or dark bay. However, fish were often transported overnight, and light grey horses were much easier to see as they pulled carts along the unlit roads. Soon enough, most Boulonnais horses were grey!

From the late 1700s to the mid-1800s, the Boulonnais spread across Europe, increasing in size thanks to the Industrial Revolution, which required athletic yet very large horses. Many were also imported to the US in the early 1900s. However, World War I and II were devastating for the breed, as its native region saw heavy combat and those that weren’t scattered or killed were in high demand as war horses. The survival of the Boulonnais can be attributed to a small handful of dedicated breeders. The breed’s population had gone from around 600,000 at the start of the 20th century to just a few thousand post-war. By the 1970s, less than a thousand mares remained. In the 70s, the decision was made to recategorise the breed, along with eight other draught breeds, from a pulling horse to a meat horse. As unfortunate as this decision may have been, it did incentivise breeders and probably helped save the Boulonnais from extinction. It also dramatically increased the breed’s average weight.

Distinguishing features: Known for its large yet elegant appearance, the Boulonnais has been called ‘Europe’s noblest draught horse’. The breed’s Arabian and oriental ancestry can be seen in its refined head, large, expressive eyes, outgoing character and energetic gaits. Boulonnais horses are adaptable and highly trainable, easy-going yet lively, remarkably strong yet still agile and expressive. They have a deep, incredibly broad chest, well-sprung ribs, a short, well-muscled neck, sloping shoulders leading to a short, straight back, and strong, rounded hindquarters. Their legs are very solid with large, flat joints and prominent muscles. Unlike other draught horses such as the Shire or the Clydesdale, their lower legs are not heavily feathered. Boulonnais horses are usually grey, although chestnut and black are also permitted. The fineness of their skin reveals delicate veins beneath their creamy white coat, an effect that resembles polished marble. They are branded with an anchor on their neck in recognition of their coastal homeland. Most Boulonnais horses stand between 14.3 and 16.3 hands high, although some are even taller.

Modern day Boulonnais: Today, Boulonnais horses are bred mainly for the meat market. However, this industry is in crisis due to falling prices, controversy and the importation of cheap meat, which has seen the consumption of horse meat fall sharply in Europe (thank god!). Boulonnais horses can also still occasionally be seen working on small farms, pulling carriages and being ridden. Once a year, they also pay homage to the ‘fish road’ that their ancestors once traversed in the Route du Poisson, a carriage race from Boulogne-sur-Mer to Compiègne.
Breed numbers remain low – it’s estimated that less than 1,000 horses remain in Europe, mostly in France, and they are considered endangered. In France, a program has been developed by the National Stud to cross Boulonnais and Arabian horses to create a fast, alert driving horse called the Araboulonnais. This breeding program is also contributing new bloodlines to the Boulonnais line, increasing its genetic resilience and the likelihood of the breed’s long-term survival.