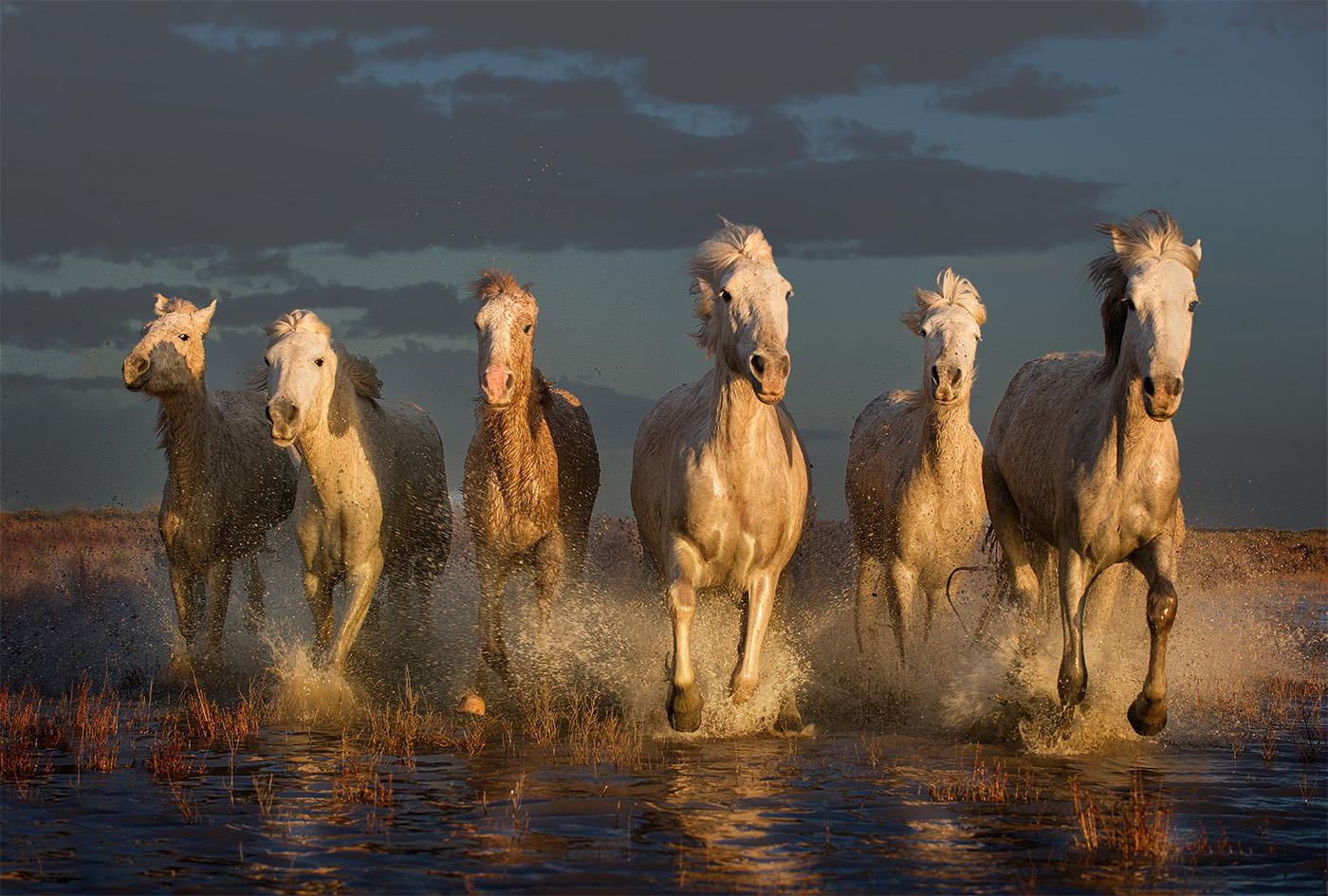 Country of origin: The Camargue region in France.

Breed origin: The Camargue horse’s origins remain relatively unknown, although it is generally considered one of the oldest breeds of horse in the world. For centuries, possibly thousands of years, these small horses have lived wild in the harsh environment of the Camargue marshes and wetlands of the Rhône delta.
It’s in the wetland of the delta that the Camargue horses, also known as the Horses of the Sea, have developed the stamina, hardiness and agility for which they are known today. Traditionally, they live in semi-feral conditions, running as herds and almost never being stabled. Most Camargue horses live on manades, or farms in the delta, and are ridden by gardians – the cowboys of the Camargue. Foals are caught and branded at around one year, and brought in to be trained at age three or four.  Gardians take their time to earn their young horses’ trust, transitioning them from semi-wild animals to responsive and willing mounts. Gardians primarily use their horses to herd the black Camargue bulls, which are featured in a non-lethal form of bullfighting popular in this part of France.

Distinguishing features: The Camargue horse is characterised by its small size, its unrefined skeleton, clean but strong legs, big head and grey (almost white) coat. Foals, however, are black or dark brown, becoming gradually lighter in colour as they age. Even though Camargue horses are considered small, generally standing between 13.1 to 14.3hh, they have the strength to serve as working horses for the people of the region. They have a short, strong neck, deep chest, compact body and a full mane and tail. Camargue horses are known for their agility, hardiness, bravery and even temperament. Their broad hooves are so tough that they are never shod.

Modern day Camargue: Because of their strong, stocky, and calm nature, Camargue horses are used as general riding horses, for equitation demonstrations, and for herding the Camargue’s famous black bulls.
The gardians congregate at various events, exhibitions and meetings, comparing the bloodlines of their horses and showcasing their natural capacity for herding, equitation, and for safety and rescue operations in the region. A combination of both the regional culture and a unique version of native horsemanship, these events are both a business meeting and long-standing recognition of the families that have worked with the Camargue horse for generations. While innately close-knit, the community of horsemen and women, are, like many who are attached to a particular horse culture, both hard-hewn and passionate ambassadors. They create a true celebration of the breed, its history, and its capacity, with events often being free to both insiders and the public.

Keen to ride the horses of the sea, and maybe even have a crack at bull herding? Check out The Camargue Ride! 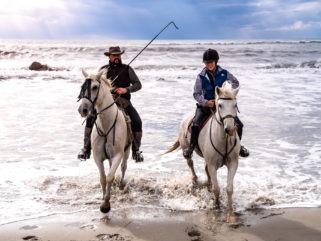 A timeless wetland checkered with silver salt pans, waterlogged rice paddies and movie-style cowboys: nothing excites us more than galloping the free-spirited, silver Camargue horses through their native habitat.