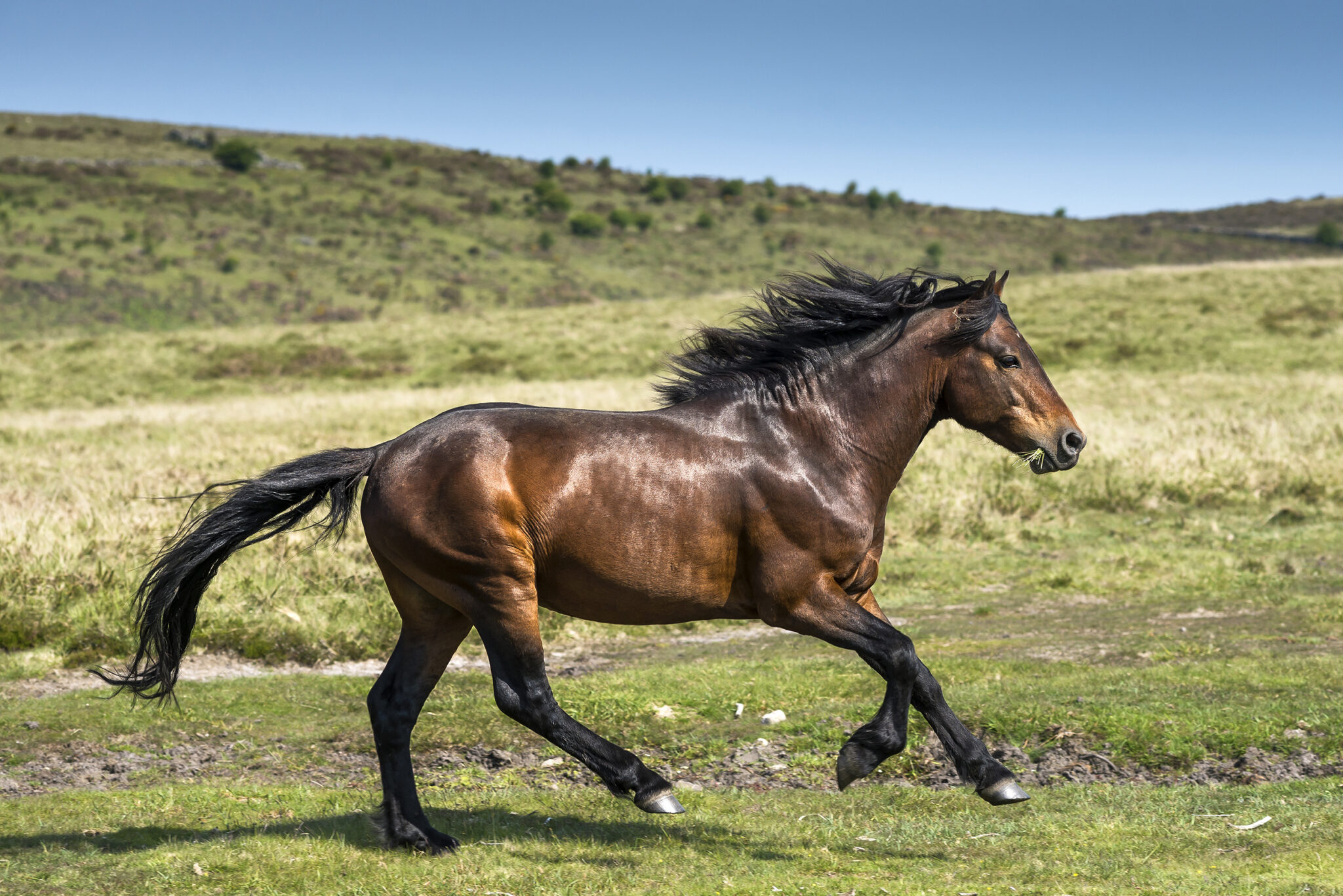 Breed origin: Named after its ancient habitat, the moors of Dartmoor in southwest England, the Dartmoor pony pre-dates modern Britain by a long shot. The bones of their prehistoric ancestors have been discovered in tombs in southern Britain dating back to around 3500 BC. At that point in time, early man was transitioning from a hunter-gatherer society to an agricultural society, so they may already have started to domesticate the ponies. Certainly, by 1500 BC, the ponies roaming Dartmoor were domesticated, and by the 11th century they were branded and ear-marked. Having been shaped by the wild, harsh moors as well as the needs of humanity for thousands of years, Dartmoor ponies are well-refined creatures. They are extremely hardy and have incredible stamina, happily carrying heavy loads (and heavy men!) despite their tiny stature. Throughout the centuries their role has changed according to the needs of the people, from working bronze age farms to transporting tin from medieval mines to escorting prisoners in the 20th century. Blood from the Welsh Pony, the now-extinct Old Devon Pack Horse and Goonhilly pony, the Arabian, the Fell Pony and the Shetland Pony has been used to improve the breed over the years. In 1924, a breed standard and stud book were established to protect and develop the purebred Dartmoor pony. Unfortunately, the breed population was devastated by World War I and II, and as with so many breeds, the introduction of agricultural machinery greatly reduced their perceived value. Luckily, a resurgence of local interest saw many ponies registered in the late 40s and 50s, reviving the population. A number of schemes have since helped to preserve the breed, but from around 25,000 Dartmoor ponies in the 30s, the number of ponies now living on the moor is less than a thousand. Of these, even fewer are purebred Dartmoor ponies, as they share the moorlands with ponies of different breeding. The Rare Breeds Survival Trust is helping to safeguard the breed’s future.

Distinguishing features: Dartmoor ponies are short, strong and very hardy, with a thick coat and a full mane and tail. They have a small head, large eyes, small, alert ears, a well-set neck, sloping shoulders, a deep girth, muscular hindquarters, strong legs with dense bone, and hard, well-shaped hooves. Dartmoor ponies are known for their reliable, gentle nature and their incredibly strong metabolism. They stand between 11.1 and 12.2 hands high and can be seen in bay, brown, black, grey, chestnut and roan. The Dartmoor breed standard does not allow excessive white markings or patterns, but this has recently caused some contention as experts argue that these patterns hark back to ancient genes rather than modern influences.

Modern day Dartmoor pony: Dartmoor ponies still roam their native moorlands, owned by locals but largely left to live semi-wild lives. They play an important part in maintaining the diverse moorland habitats and supporting other wildlife. At the annual pony ‘drifts’, they are rounded up and the pony keepers decide which animals to leave on the moor and which to sell. Once sold, Dartmoor ponies go on to enjoy great success as children’s ponies, under harness, in the show ring and out on the trails.