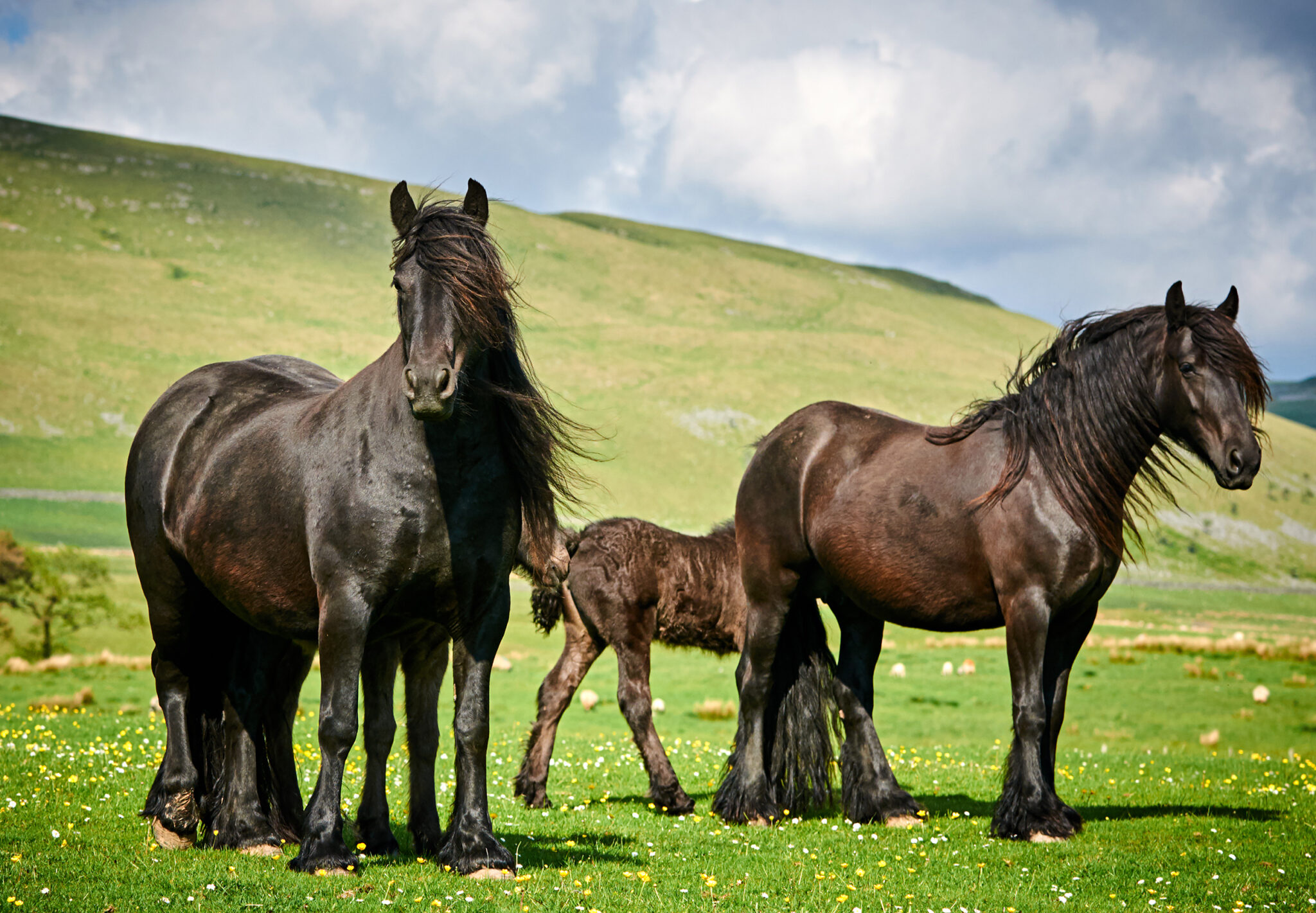 Breed origin: The Fell Pony originally lived in the fells of northwest England, specifically Northumberland, Cumberland and Westmorland (Cumbria). The name ‘fell’ comes from the Norse word for hills, and these ponies’ ancestors lived in the area long before the Romans came to England in the first century AD. At this point, the local Celtic ponies were probably crossed with horses imported by the Romans, many of which were Friesians. The similarities between these two breeds are striking, and the Fell Pony also received the Friesian’s fast, ground-covering trot. This type of horse became known as the Galloway, although that breed is now extinct. The Dales Pony also evolved from the Galloway.

For many centuries, the Fell Pony was the ‘jack of all trades’, serving as a packhorse, draught horse, riding horse, carriage horse, and also being used for trotting races, sledge pulling, shepherding and wolf hunting! Their strength, stamina and efficient trot played an especially important role in the transport of heavy materials and bulky farm goods. As late as the 18th century, this breed was still used to transport goods all over England for import and export. They remained useful further into the industrial era than many other breeds thanks to their suitability for transporting copper, iron and lead from the mines to the smelting works. They were also used in coal mines, both as pit ponies and above ground for hauling machinery and supplies. Even when railways and canals took over the transportation, remote communities remained reliant on teams of Fell Ponies to deliver their supplies and mail.

Finally, in the early 20th century, the breed’s numbers and quality began to decline as their working animal status was largely lost and they were frequently crossed with more elegant or bigger breeds to produce farm horses and flashy riding and driving horses. The Fell Pony Society was founded in 1922 to protect the breed in its original and pure form. Little headway was made until the 1950s, when pleasure riding once again became a popular pastime. Since then, the Fell Pony population has steadily increased, the breed proving successful in a wide range of disciplines from trail riding to competitive driving.

Distinguishing features: Fell Ponies display a lot of variation in weight and height, although they average 13.2 hands high and never exceed 14 hands high. They breed true to type, being consistently muscular, hardy, sound, athletic, well-tempered and intelligent. Their neat, pony-like head is set on a fairly long, muscular neck, merging into well laid-back, sloping shoulders. They have a strong back, well spung ribs, muscular loins, powerful, square hindquarters and strong legs with plenty of bone. Their sloping pasterns and short cannon bones lead to hard, round hooves, partially hidden beneath fine feathering. Fell Ponies have characteristically long, thick manes and tails, and can be black, brown, bay or grey. Although bred for the harsh, mountainous environment of northwest England, these ponies can adapt to almost any climate. They are exceptionally adept at handling difficult terrain, with a great knack for finding the safest path and a sixth sense for potential danger.

Modern day Fell Pony: Today, most Fell Ponies are used for pleasure riding and competition, although some are still used for pack work and farm work. They also do well in driving, trotting races, cross country, trail riding and endurance riding. Fell Ponies are ideal riding school mounts and can be ridden by both adults and children, with many Riding for the Disabled programmes employing this calm, honest breed.