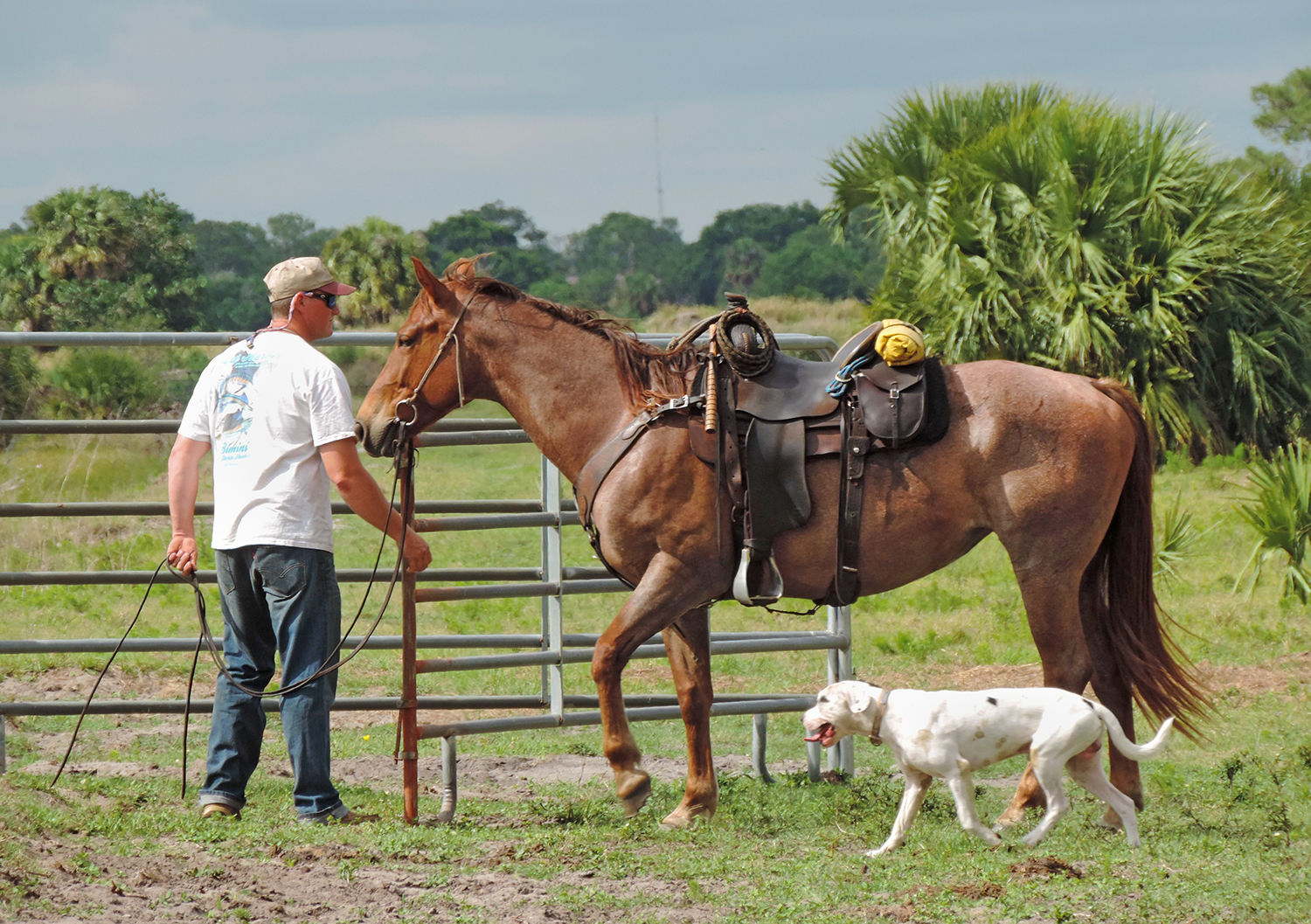 Breed origin: The Florida Cracker’s ancestors were the horses brought to Florida by the Spanish in the 16th century. These Iberian horses were the foundation of many North and South American breeds, so the Florida Cracker is closely related to the Paso Fino, Peruvian Paso, Criollo and Mustang, to name a few. The Spanish also brought cattle, and the horses were primarily used to work the cattle in the marshy fields of Florida. When the Spanish returned to their homeland, they left their animals behind and both the horses and cattle roamed free or semi-wild for centuries. Natural selection further toughened them and today there are few other horses who can live so happily in this challenging, waterlogged environment. During this time, Florida Crackers also became important to native American Indian tribes, and this is still reflected in some of the breed’s alternative names such as the Chicksaw Pony amd Seminole Pony. Their most common name, however, stems from the sound of the local cattlemen’s stockwhips. The cattlemen became known as ‘crackers’, and eventually their horse was named the Florida Cracker. The cattle also received this name!

From the mid-16th century to the 1930s, the Florida Cracker was the predominant horse breed used in the southeast. It was especially highly prized during the American Civil War thanks to their speed, endurance, agility and smooth paces. However, during the Great Depression, a relief program encouraged the movement of cattle from the Dust Bowl in the prairies to Florida, which remained relatively fertile. These cattle brought with them the parasitic screwworm, which drastically changed cattle management practices in Florida. Instead of roaming free, the cattle had to be fenced in and roped frequently so they could be treated for screwworm. The Florida Cracker was too lightweight for this heavy-duty, hands-on cattle work, so the Quarter Horse was brought in and rapidly replaced the Cracker. Only a handful of Florida ranching families continued breeding the Cracker, which had once been so widespread that the wild herds were rounded up annually and sold to buyers who travelled long distances to attend the sales. In 1989, the Florida Cracker Horse Association was founded, and a breed registry followed two years later. 75 ‘foundation horses’ and 14 of their offspring were registered, and from these humble beginnings, a significant revival has occurred. By 2009, over 900 horses had been registered as purebred Florida Crackers.

Distinguishing features: Florida Crackers have typical ‘Spanish’ conformation: a short, strong back, long shoulders on a 40 to 50 degree angle, a short, sloping croup and, overall, a balanced and elegant build. Their head has a straight or slightly slightly concave profile, with dark, alert eyes, a short jaw and a prominent throat latch. Their well-defined yet narrow neck leads to pronounced yet not prominent withers, and their chest is on the narrow side of average. The Florida Cracker’s underline is longer than its topline, and its tail is fairly low-set. The breed has an exceptionally long mane and tail and is most often bay, black or grey, although chestnut, grullo, dun, roan and pinto are also seen. Florida Crackers stand between 13.2 and 15 hands high and are exceptionally strong, capable of carrying large adults with the ease of a much larger horse. They are intelligent, gentle, hardy and frugal, and have great resistance to disease. Thanks to centuries of natural selection, they are incredibly quick and agile, with a ‘sixth sense’ for potential danger making them invaluable partners in the crocodile and snake-infested wetlands of Florida. They have a great deal of natural ‘cow sense’ and a strong herd instinct. The Florida Cracker is a gaited breed, with two extra gaits recognised by the breed assocation: the running walk and the amble.

Modern-day Florida Cracker: Today, there are three main bloodlines of Florida Cracker stock, with a few smaller lines as well, and the population sits just above 1,000. The breed therefore has ‘critical’ conservation status, although numbers are gradually increasing. It is the official state horse of Florida and is still used for ranch and cattle work in its home state. The Florida Cracker is a popular mount for children as well as adults thanks to its size, and is also used for pleasure riding, western riding, mounted games and endurance riding.