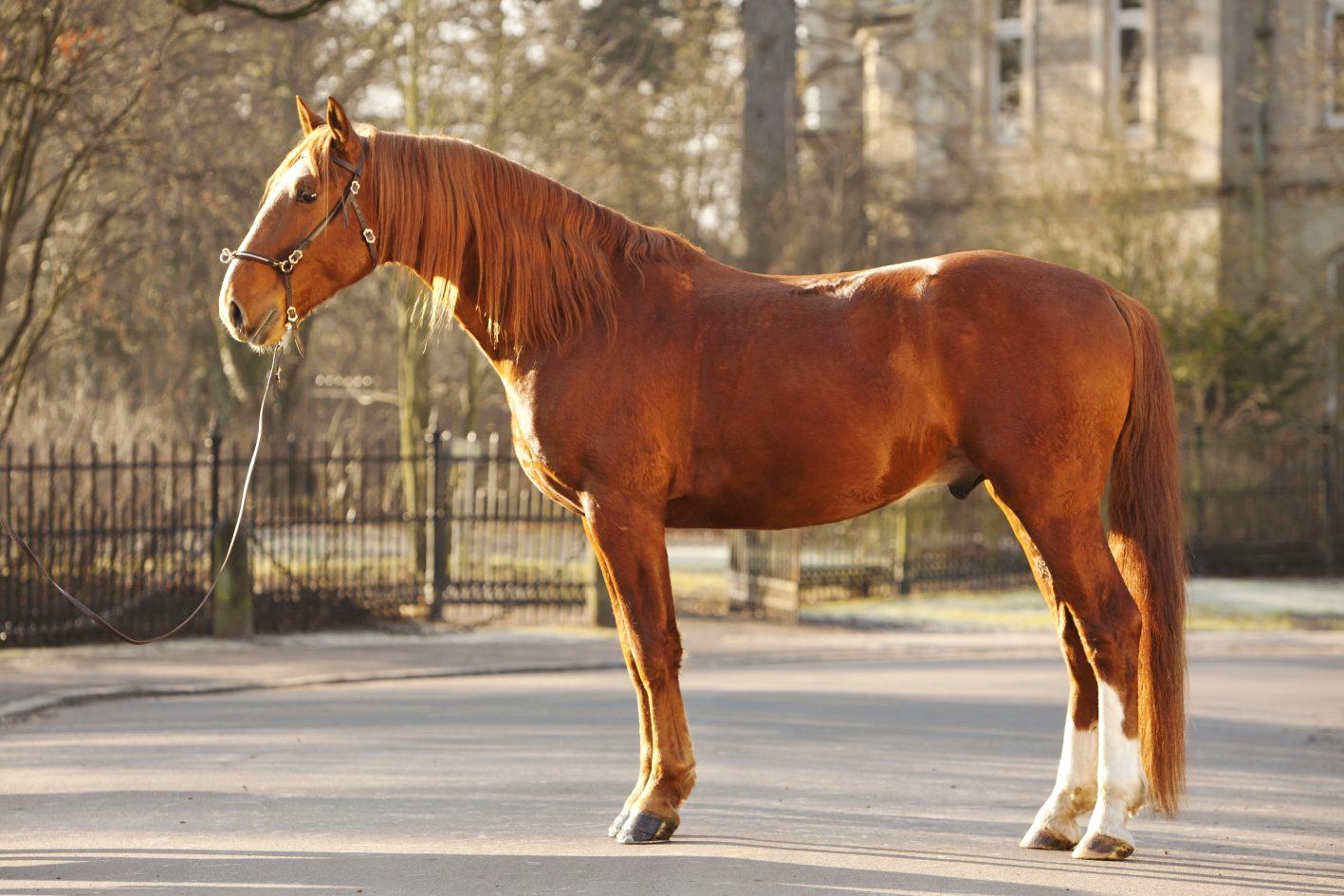 Breed origin: The Frederiksborg’s claim to fame is that it is Denmark’s oldest breed of horse, and the world’s oldest pedigree domestic animal breed! This is all thanks to King Frederik II, who opened the Royal Frederiskborg Stud (named after the town where it was located, which itself was named after the King) in the 16th century. The best horses from various royal studs were purchased for King Frederik II’s stud, largely with Spanish and Neapolitan bloodlines, but with some Norfolk Roadster and Arabian stock, too. The stud became known for its elegant, robust carriage horses as well as its light riding horses, which were in great demand as officer’s mounts in the cavalry, for haute ecole dressage, and as stylish, high-stepping riding and driving parade horses. In the 17th century, the royal court of Denmark raised its ceremonial standards, requiring processional teams of horses to be the same size, colour and height. As a result, the Royal Frederiksborg Stud began separating their breeding programs by colour, breeding exclusively chestnut, black, grey and white lines. This approach was so successful that the Frederiksborg horses became highly sought-after in all the European courts for riding, driving and improving the local stock. Their elegance, beautiful action and Baroque build can be seen in breeds such as the Orlov Trotter, Lipizzan, and Jutland.
Unfortunately, their popularity was such that after a booming, hundred-year export trade, Denmark found it had almost no Frederiksborgs left! The stud farm was closed in the 19th century and breeding continued through private farms, with the emphasis shifting from flashy movement to strength and versatility. Frederiksborgs were often used for farm work and pulling stagecoaches, although their noble pedigree was never forgotten. In the mid-20th century, Friesian, Oldenburg, Thoroughbred and Arabian bloodlines were introduced – partly to bolster the small population and partly to improve the breed’s abilities as an all-round performance horse. Since then, the breed has proven highly successful in all sorts of mounted and driving sports and contributed to the development of breeds such as the Danish Warmblood, Holsteiner, Hanoverian and Swedish Warmblood.

Breed characteristics: Frederiksborgs have a very uniform type thanks to their long and pure pedigree. They are typically chestnut, but can also be bay, grey, buckskin and palomino. They often have flaxen manes and tails and bold white markings on the face and legs. They are a mid-sized warmblood breed, with handsome features, expressive action and an athletic build. The Frederiksborg has a well-proportioned head with a straight or slightly convex profile, large eyes, pointed, mobile ears and a wide muzzle. The neck is high-set, crested and powerful, set on broad, pronounced withers and strong, sloping shoulders. The breed has a short, straight back, a deep chest, broad hindquarters, and clean legs with good bone and plenty of muscle. Frederiksborgs are willing, calm and easy to train, with a strong constitution enabling them to thrive in tough conditions.

Modern day Frederiksborg: Today, there are only around 2,000 registered Frederiksborgs in the world, with less than 100 foals born each year. The breed’s loyal following is growing, however, and it is gradually establishing itself in the US and Australia as well as throughout Europe. It is a versatile sport horse that excels in disciplines such as show jumping, cross country, dressage, eventing, endurance riding, vaulting, jousting, hunting, driving and pleasure riding, to name a few.