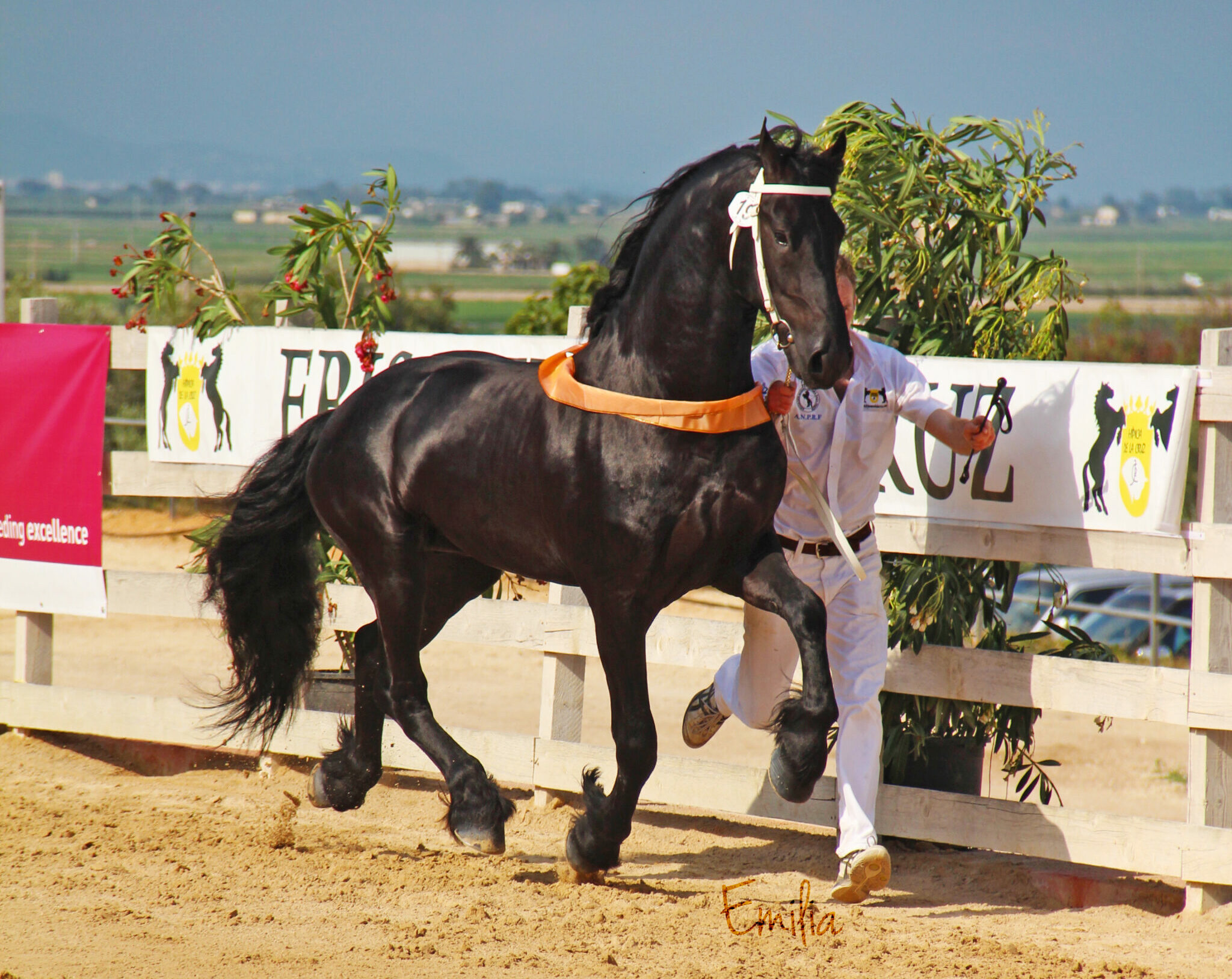 Country of origin: The Netherlands

Breed origin: The Friesian horse originated in the province of Friesland, a northern province of the Netherlands. Despite having the confirmation of a light draught horse, Friesians are graceful and athletic, with a natural elegance that gives them great presence whether under saddle or in harness. It is believed that the ancestors of Friesian horses were used as war horses in the medieval era, as their size enabled them to carry fully armoured knights into battle without sacrificing agility. References to the Friesian have been found dating as far back as 1251, and various accounts full of praise exist from the 16th century onwards.
During the 16th and 17th centuries, armour and weapons became lighter and there was less demand for heavy war horses. Because of this, Andalusian and Arabian blood was introduced to produce a lighter horse more suitable for carriage work. This influence can also be seen in the Friesian’s high knee action, small head and erect, curving neck. The Friesian was used throughout the European royal courts as a coach horse, and was also popular in the leading riding schools of the era.
The 18th and 19th centuries saw the Friesian horse breed in demand not only as harness horses, court horses and for agricultural work, but also for trotting races, which were extremely popular in Holland. However, this type of Friesian horse (bred to be lighter and faster for trotting) was considered an inferior line by many, and there was a huge effort to return to pureblood stock at the end of the 19th century. It was also reintroduced to America, where previous lines had died out due to crossbreeding.
During the 20th century, although the breed’s usefulness as an agricultural breed decreased, the numbers continued to recover thanks to a handful of dedicated breeders who showcased the Friesian’s aptitude as a pleasure mount and show horse.

Distinguishing features: Friesian horses are easily recognised by their glossy black coats. White markings are rare, and must be very small in order for the horse to be registered. The occasional chestnut Friesian is seen, as some bloodlines carry the ‘red’ gene, but this colouring is frowned upon and is gradually being bred out. Friesians are also known for their long, thick manes and tails, which are often wavy. Their manes, tails and the long, silky ‘feathers’ on their lower legs are almost always left untrimmed.
There are two distinct conformation types: the ‘Baroque’ type, with the more robust, classical Friesian build, and the modern, ‘sport horse’ type, which is finer-boned and more often seen in the show ring. Friesians generally stand between 15.2 to 16 hands high, although some horses grow taller. They have long, arched necks that they carry high and proud, and well-chiseled heads. With powerful, sloping shoulders and hindquarters, compact, muscular bodies, and short legs with thick, clean joints, these horses are bred for strength. They have a powerful, high-stepping trot with a lot of ‘air time’ between steps. Their hindquarters provide enormous momentum at the canter, creating a dramatic, lively gait. They carry themselves with elegance and pride, and have tremendous presence.
Friesian horses have a gentle, yet willing and energetic temperament. They are people-oriented, often displaying great loyalty and character. A highly intelligent breed, they are known for their remarkable powers of memory and knowledge.

Modern day Friesian: Despite almost becoming extinct on more than one occasion, the Friesian is now rapidly growing in numbers and popularity. Today the breed is used both in harness and under saddle, with rising popularity as a dressage mount. Friesians are also used for competitive, recreational and ceremonial driving. They can frequently be seen pulling lavish carriages at ceremonial events. Because of their striking appearance, Friesian horses are also a popular choice for movies and television, particularly in historical and fantasy productions. Their effortless elegance translates well on-screen, and their calm temperament sees them cope well with the bustle of filmmaking.