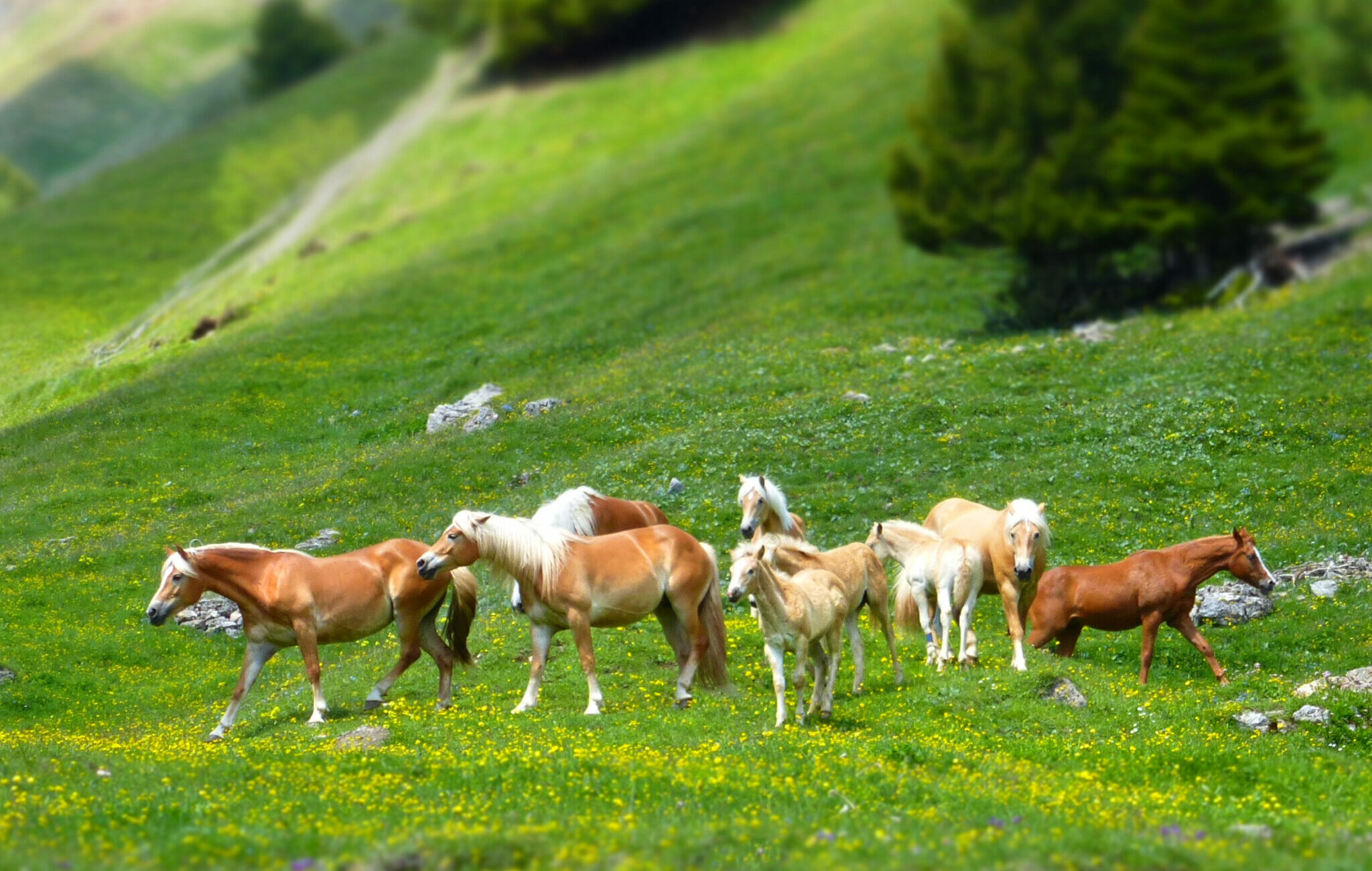 Name of breed: Haflinger, also known as the Avelignese

Breed origin: The Haflinger is a breed of horse that developed in Austria and northern Italy (namely the South Tyrolean mountains) during the late nineteenth century. The breed’s ancestry traces back to the Middle Ages. Writings from the era describe an Oriental horse found only in the South Tyrolean mountains, where agile, hardy and surefooted steeds were essential to daily life.  The modern-day Haflinger is the result of infusions of Arabian and various European bloodlines into the original native Tyrolean ponies. The breed was formally established in 1874, with the birth of the foundation sire, 249 Folie. Folie was the result of a cross between a native Tyrolean mare and a half Arabian stallion, and all purebred Haflingers trace back to him. The breed was named after the Tyrolean village of Hafling and continued to be developed primarily in these mountains until the outbreak of World War II.

During World War II, the military shifted the focus of Haflinger breeding to producing a smaller, stockier packhorse, sometimes crossbreeding in pursuit of this type. As a result, breeders sometimes used lower-quality Haflingers to save the pure breed from extinction. In the postwar era, although the emphasis changed once again to producing a taller, lighter horse, the Haflinger was indiscriminately crossed with other breeds, further increasing the risk of extinction. However, in 1946, the the Tyrolean breeders’ association was restructured and introduced a rigid breeding programme with a closed stud book. Righting the wrongs of the past few decades, breeders returned to their original vision: a large-framed, refined and versatile horse with a sound constitution and a good temperament. As the original farming jobs of the Haflinger were taken over by machines, the breed transitioned from a work horse to a diverse riding and driving horse. Interest in Haflingers increased in other countries and between 1950 and 1974 the population grew, even while the overall European horse population decreased. This trend continued steadily and by 2005, almost 250,000 Haflingers existed worldwide. There are now breeding farms in several countries, although most of the breeding stock still comes from the South Tyrol region and other parts of Austria. In 2003, a Haflinger became the first horse to be cloned, resulting in a filly named Prometea.

Distinguishing features: The Haflinger has a refined yet solid build, with substantial bone and a harmonious physique. Their quiet, kind, people-pleasing nature is an official breed standard. Some sources recognise two types: a shorter, heavier type used for draught work and a taller, lighter type used for pleasure riding, light driving and competition. Haflingers are always chestnut in colour and come in shades ranging from a light gold to a rich liver chestnut. The mane and tail are white or flaxen, giving them a palomino appearance. The breed’s height has increased since the end of World War II, when it stood an average of 13.3 hands high. Today, Haflingers stand between 13.3 and 15.1 hands high. They have a refined and expressive head, medium-length neck, pronounced withers, large, sloping shoulders, a deep chest and a muscular back. Their croup is long, strong and gently sloping, leading to clean legs with broad, distinct joints and well-defined tendons. The Haflinger has rhythmic, ground-covering gaits and is a willing and versatile mount. The breed is intelligent, elegant, hardy and sound, with great stamina and athleticism.

Modern day Haflinger: Today, Haflingers are used for many activities including draught and pack work, light harness and combined driving, and many under-saddle disciplines such as western riding, trail riding and equestrian tourism, endurance riding, dressage, show jumping, vaulting, and therapeutic riding programs. They are used extensively as dressage horses for children, but are also tall and sturdy enough to be ridden by adults. With their friendly, balanced personalities, Haflingers have a way of becoming part of the family, serving a purpose for everyone. The Austrian and German armies still use Haflingers as packhorses in rough terrain, and in some regions they are still used to supply remote mountain huts and transport wood from steep slopes. There are several Haflinger breed shows worldwide, including those in Germany, Great Britain and the United States.

You can ride Haflingers on our horse riding holiday in The Dolomites, Italy!