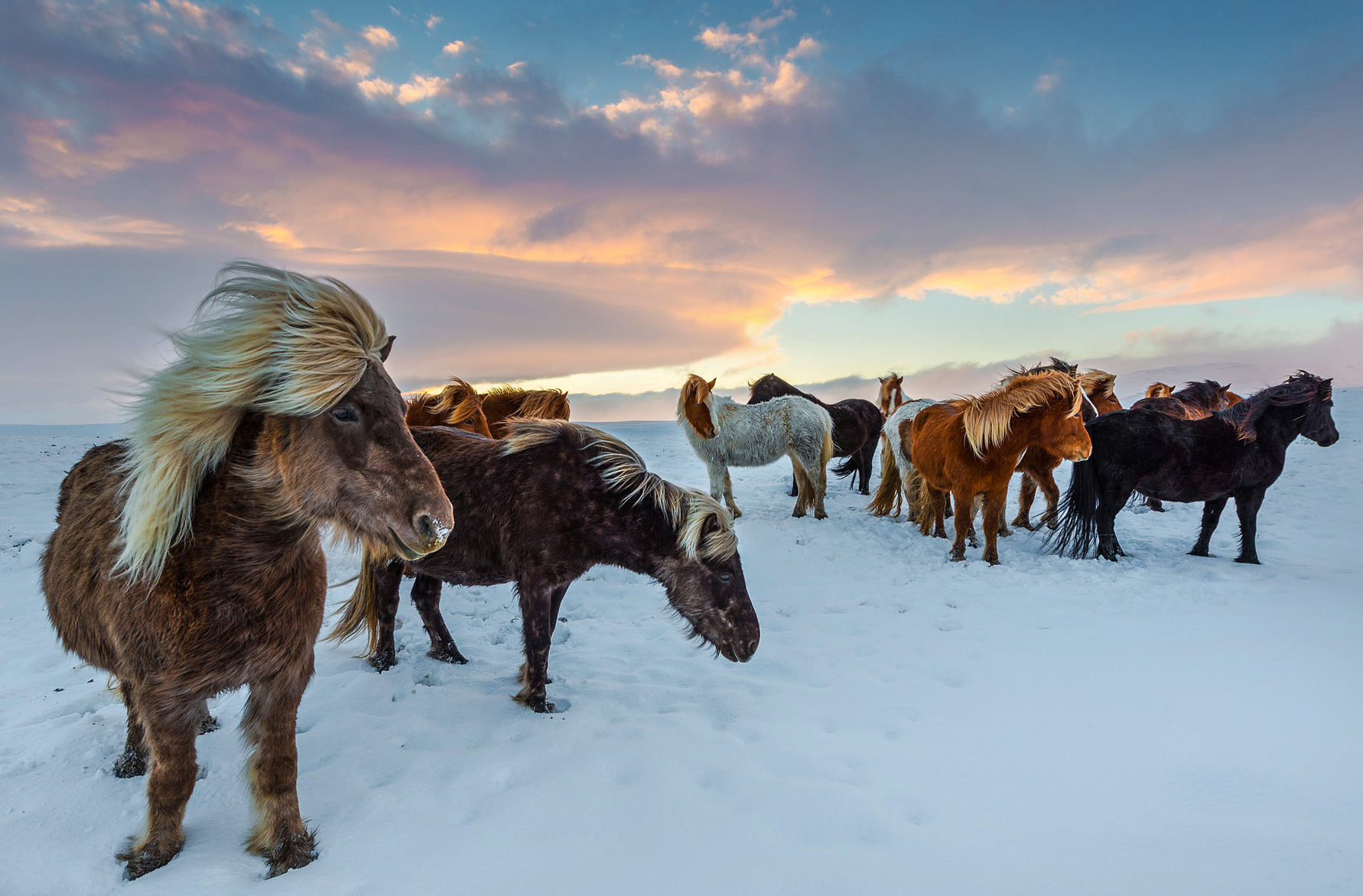 Breed origin: The ancestors of the Icelandic horse were probably brought to Iceland by Norse settlers between 860 and 935 AD. Only the best horses were chosen to undertake the voyage and those that survived became indispensable to the settlers as they eked out a living in their wild new colony. These first horses are known to have carried Fjord, Mongolian and Tarpan bloodlines, which have all contributed to the Icelandic horse’s ability to withstand extreme weather, sparse vegetation and long journeys. These vikings were followed by more settlers from Norse colonies in Ireland, the Isle of Man and the Western Isles of Scotland, who arrived with horses that would elsewhere become the ancestors of Shetland, Highland and Connemara ponies. The new and old stock were mixed and the Icelandic breed was carefully developed, although several types are still seen today.

Isolated for over a thousand years, the Icelandic horse is one of the purest breeds in the world. The island has also protected it from diseases, and strict laws still maintain the horses’ biosecurity today: once a horse leaves Iceland, it can never return. However, nothing could protect the horses from the effects of the 1783 eruption of the volcanic craters of Laki. The haze of gases and particles, the contamination of water and vegetation, and the resulting famine left 10,000 people and at least 20,000 horses dead. About three quarters of the country’s livestock was decimated, and the survivors had to make do with poor quality grasses for many seasons. With around 7,000 horses remaining, the gene pool had become very limited. But Iceland’s harsh natural conditions sorted the strong from the weak, and the breed retained its high quality.

As well as being used for transport, herding, farm work and as a source of meat, the Icelandic horse has always played an important role in the cultural identity of its people. Early Norsemen worshipped the horse as a symbol of fertility, and white horses were used at sacrificial feasts and ceremonies. Horses also feature strongly in Norse mythology, the best-known example being Sleipnir, the eight-legged horse of Odin, the chief of the gods. Viking warriors were sometimes buried with their favourite warhorse, too, so that they could go together to the halls of Valhalla. These days, many Icelanders regard their horses as family members, and often give them names rooted in mythology.

Distinguishing features: Icelandic horses are best known for their unique gaits. As well as the walk, trot, canter and gallop, most Icelandic horses can perform one or two additional gaits. The first is a four-beat lateral ambling gait, known as the tölt. The tölt is very comfortable for the rider, can be maintained over long distances and allows for significant speed variation. The second extra gait is called skeið, or ‘flying pace’. Not all Icelandic horses can perform this gait, but it is highly prized due to its smoothness and the speed at which it can be performed – up to 50 kilometres per hour! The skeið is a two-beat lateral gait with a moment of suspension between footfalls – on each side, both hooves land almost simultaneously. Click here to see an Icelandic horse perform all of its paces.

Icelandic horses normally stand 13 to 14 hands high. Despite their short stature, they are considered horses, not ponies. Icelandic horses have a double coat, which insulates them during the extremes of the Icelandic winter. Almost every coat colour imaginable is seen. They have compact bodies, with a short neck, sloping croup and thick mane and tail. Different breeders and different regions have selectively bred for certain characteristics, so there is considerable variation in the breed’s conformation, size and temperament from place to place. Icelandic horses are very long-lived, and are frequently ridden well into their twenties. They are spirited, friendly, willing, intelligent and adventurous. They adapt well to a range of disciplines and roles.

Modern day Icelandic horse: Although improvements in transport, roads and machinery have decreased the need for horses as working animals, the breed still plays an important part in Icelandic life. Horses are still used for sheep herding, as they can travel across terrain that is impassable by car. Some horses are also raised for their meat, which is consumed both in Iceland and overseas. Horse races are very popular, and breed shows are both a point of honour for Icelandic equestrians and a gathering place for the community. Around the world, they are used for dressage, jumping, cross country, trail riding, endurance, polo, barrel racing and under harness. However, the main reason for the ever-increasing worldwide popularity of Icelandic horses is their suitability for pleasure riding thanks to their good temperament, stamina and smooth paces. Of the 250,000 registered Icelandic horses, only 80,000 live on their native island.

Feeling inspired? You can ride these incredible horses yourself on our Icelandic rides: the Touch of the Highlands Ride and the Wilderness Expedition! 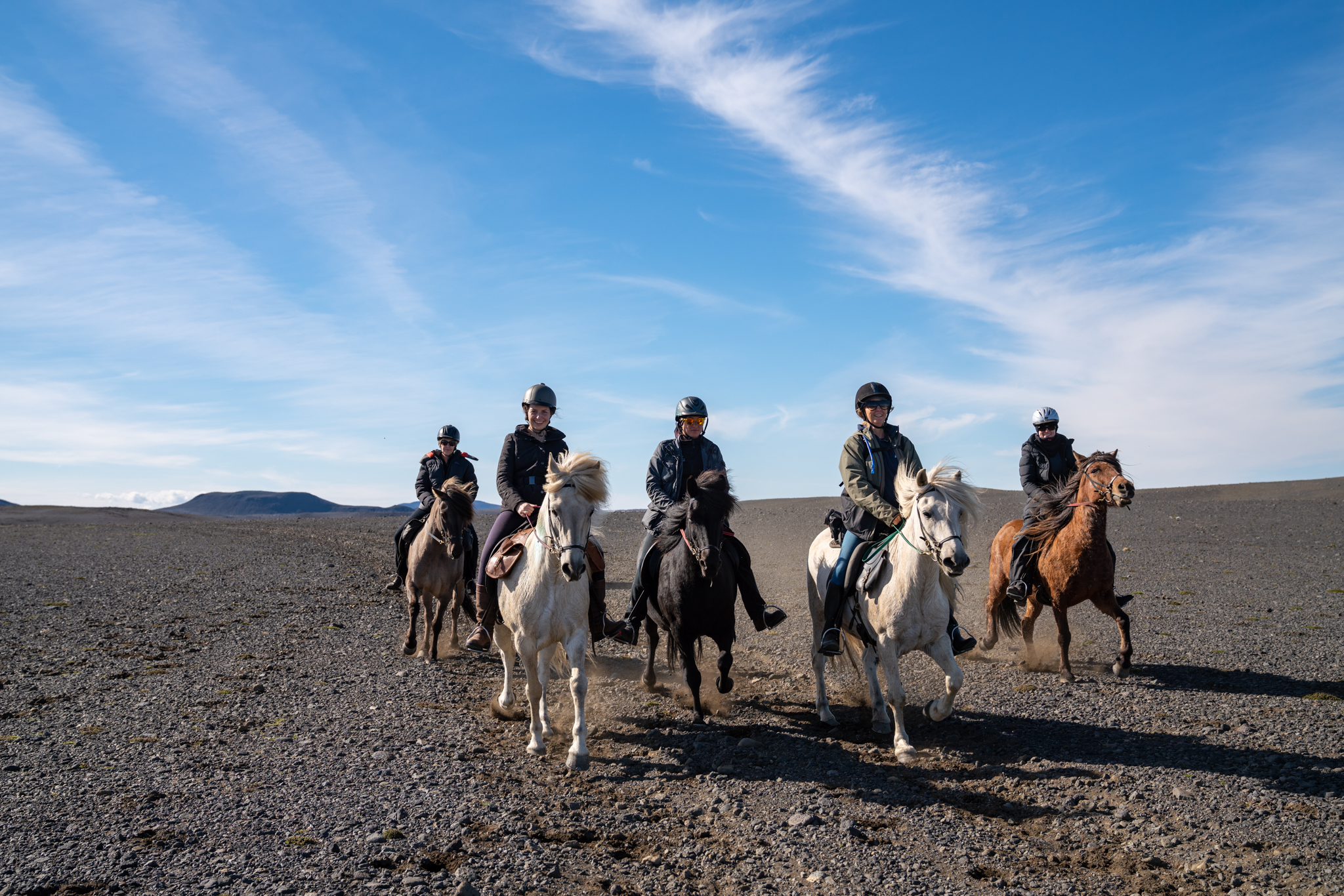 Right, we’ve made an executive decision: Iceland should now be referred to as WOW-land. 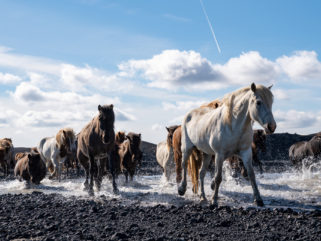 Touch of the Highlands Ride

Believe us when we say, once you’ve tölted under a midnight sun in Iceland there is no turning back. You’ll be transformed. FOREVER.