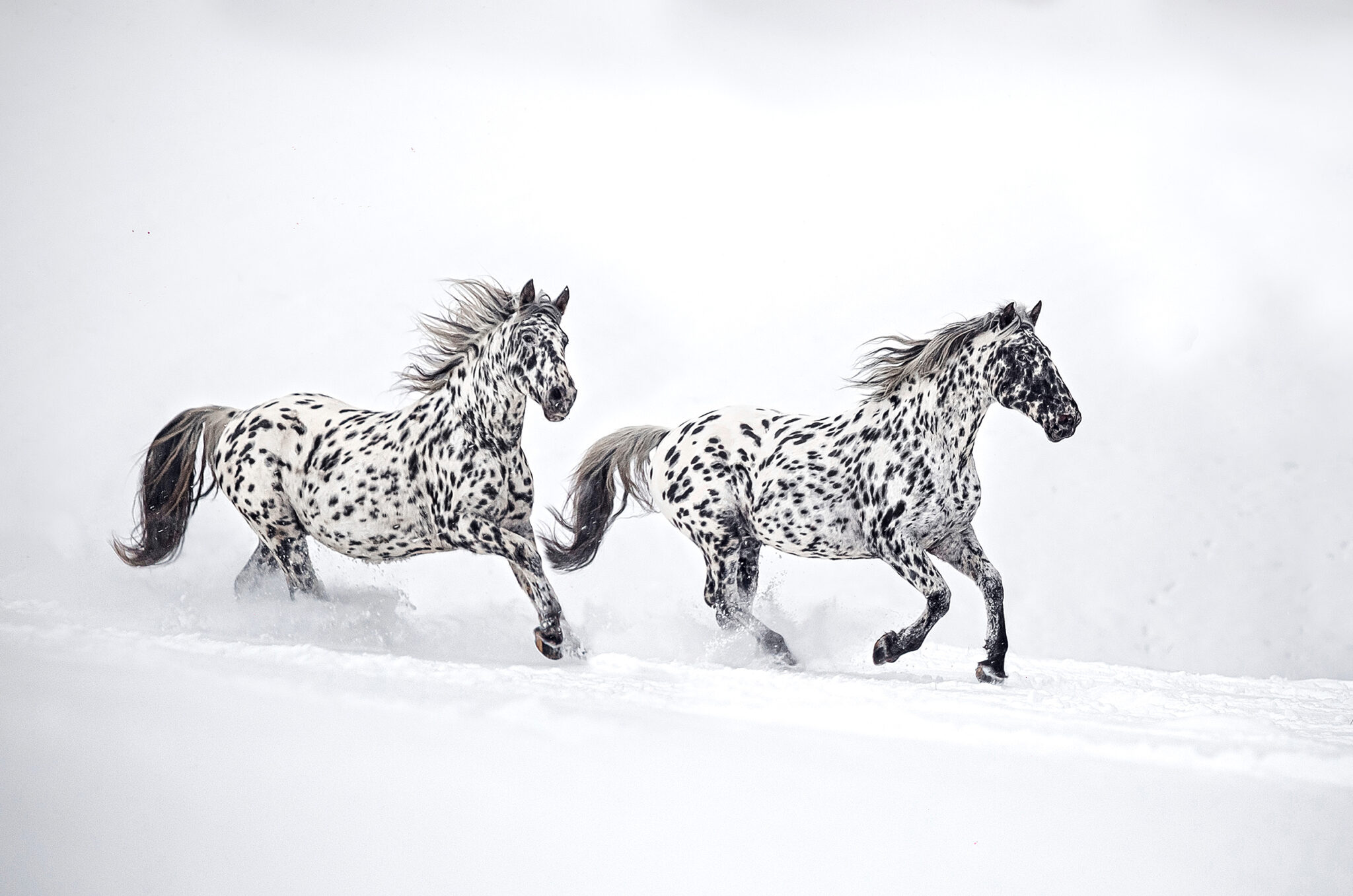 Breed origin: The Knabstrupper is believed to trace back to the prehistoric spotted horses that were native to what is now Spain. Cave paintings of horses with spots akin to the leopard patterning seen in many Knabstruppers have been discovered in these regions. However, the modern breed was established in Denmark in 1812 in when a chestnut mare with leopard complex blanket markings was bred to a solid-coloured Frederiksborg stallion, producing a colt with dramatic spotting. The mare was known as Flaebehoppen and she was owned by Major Villars Lunn, who kept her at an estate called Knabstrupgaard. The offspring of the mare and her son were all loudly coloured, and became known as Knabstruppers. For a few decades, they were among the most highly sought-after horses in Europe, but by the 1870s, the limited gene pool had resulted in problems related to inbreeding. Then, in 1891, a fire killed 22 of the best Knabstruppers.

Denmark’s spotted horses seemed doomed, with most of the remaining Knabstruppers suffering from inbreeding, but a few dedicated families fought to keep the breed going. Finally, in 1971, they were thrown a lifeline in the form of three Appaloosa stallions imported from the United States. The two breeds share a common ancestry, having developed largely from old Spanish bloodlines, so it made sense to use one spotted breed to revive the other. The Danish Knabstrupper association was established in the same year, accepting most spotted horses into the registry. As well as the Appaloosa, a number of other breeds were crossbred to Knabstruppers to produce loudly coloured, athletic offspring. Danish Warmbloods, Trakehners and Holsteiners were the most common crosses, and this paved the way forward for the breed, strengthening its genetics and improving its overall quality while retaining the spotted patterning. Some studs even ‘bred down’ to produce pony-sized Knabstruppers for children!

Distinguishing features: The Knabstrupper is best known for its spots, and exhibits coat patterns ranging from solid (yep – not all Knabstruppers have spots!) to full leopard spotting, and everything in between. There is a lot of variation in the size and conformation of Knabstruppers depending on the individual horse’s bloodlines. Most stand between 15.2 and 16 hands high, but they can be taller, and Knabstrupper ponies also exist. They can be separated into three types: the Sport Horse type, the Baroque type and the Pony type. The Sport Horse has greater warmblood influence and excels at dressage, eventing and show jumping, while the Baroque type has a more classical build: shorter and stronger. The Pony type stands less than 14.2 hands high and is very popular with children thanks to its colouring and gentle temperament. Regardless of type, all Knabstruppers are athletic and elegant, with lively yet comfortable action and an enthusiastic yet docile disposition. They have great stamina and are easy to train. Knabstruppers are ‘easy keepers’, having historically been kept outside most of the year rather than stabled, and frequently live to a great age.

Modern day Knabstrupper: Today, there are around 600 Knabstruppers in existence, although the breed is very popular and studs exist in Europe, the United Kingdom, the United States, Australia and New Zealand. Knabstruppers are used for all sorts of general riding and are successful in dressage, eventing and show jumping. They are also used as carriage horses thanks to their elegant movement, proud bearing and eye-catching colouring.