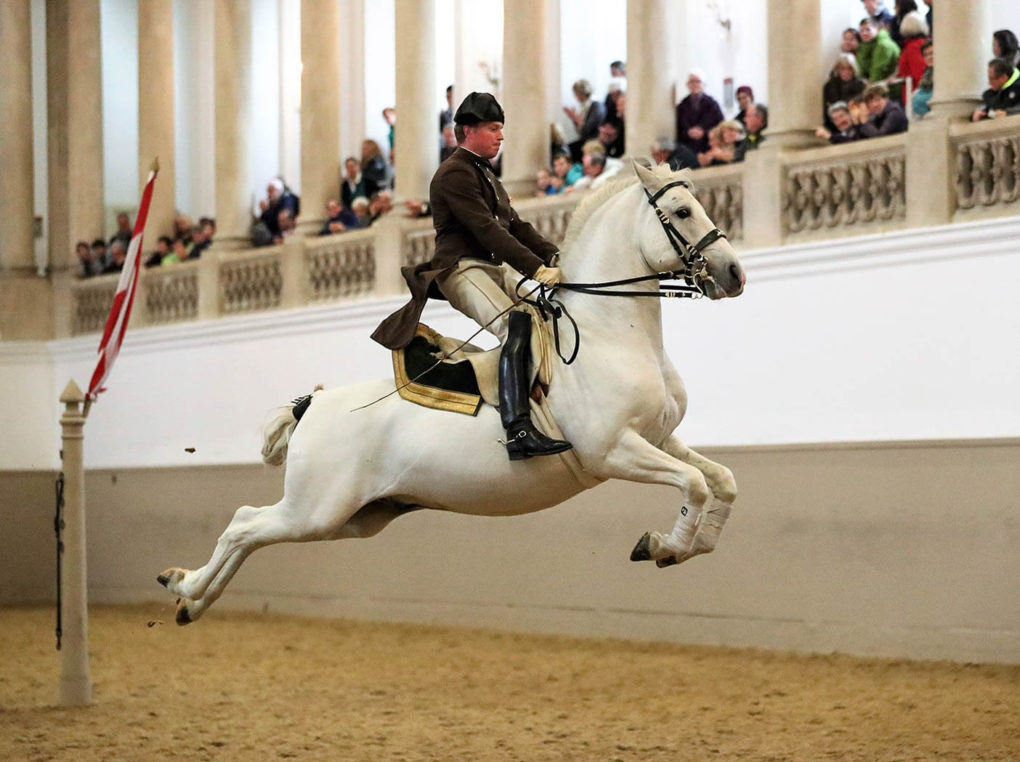 Name of breed: Lipizzan, or Lipizzaner

Country of origin: Developed by the Habsburg Monarchy in what is now Slovenia.

Breed origin: The Lipizzan breed has its roots in ancient Iberian stock, but the breed itself dates back to the 16th century, when it was developed by the Habsburg family to fill their need for a powerful but agile horse for use in the military and in the riding schools that were very popular among the nobility of central Europe. In 1562, Emperor Maximillian II brought Spanish horses to Austria and founded the court stud at Kladrub. Then in 1580, his brother, Archduke Charles, established a similar stud at Lipizza (now known as Lipica) in modern-day Slovenia. Both of these studs flourished and, eventually, both produced the foundation stallions of the modern Lipizzan breed. Initially, Spanish, Barb and Arabian stock were bred to the native Karst horses, with their offspring bred to the now-extinct Neapolitan horse, Kladruber, Frederiksborg and other Baroque horses with Spanish ancestry.
The sires that went on to become the foundation stallions for the Lipizzan were all born between 1765 and 1819. They were Conversano, a Neapolitan; Favory, a stallion of Bohemian origin from the Kladrub stud; Maestoso, a Neapolitan-Spanish stallion also from the Kladrub stud; Pluto, a stallion with Spanish and Danish bloodlines; Siglavy, an Arabian; and Neapolitano, who was unsurprisingly a Neapolitan. In addition to these six ‘classical dynasties’, two more stallion lines are recognised, although they were not used at the stud in Lipizza but instead at other studs throughout the Habsburg Empire. These lines trace back to Incitato, a Spanish stallion, and Tulipan, a Baroque type stallion of Spanish pedigree. There are also around 35 mare family lines recognised today, 14 of which are ‘classic’ lines from Lipizza.
The Spanish Riding School has a symbiotic relationship with the Lipizzan horse. Established by the Habsburg Monarchy in Vienna in 1572, the school’s purpose was (and still is) to preserve the art of classical horsemanship, and to breed and train Lipizzan horses for the purpose. It is one of the ‘Big Four’ most prestigious classical riding schools in the world, known for the ‘airs above the ground’ at which its horses excel: the levade, the capriole and the courbette. The stallion in the above photo is performing the capriole, in which he jumps straight into the air, kicks out with his hind legs, then lands back on all four legs. It requires enormous power to perform correctly, and is considered the most difficult of all the airs above the ground. As such, it is not taught until the preceding movements have been mastered and the horse is deemed physically and mentally ready. All of the Spanish Riding School’s horses come from Austria’s Piber Federal Stud, which selects the most promising stallions to be sent to the school, and receives those that perform the best as breeding sires when they reach retirement.

Distinguishing features:  Lipizzans are extremely sturdy and compact, with most standing between 14.2 and 15.2 hands high. They have a classical Baroque breed with a muscular body, brilliant action, and naturally proud carriage. Their head is long, with large, expressive eyes, small ears and flared nostrils. They have a short, arched neck, low and broad withers, substantial shoulders, a wide, deep chest and well-rounded hindquarters. Their tail is well-set, carried high and, like the mane, very thick and long. They have short, strong, well-defined legs with broad joints, leading to small, hard hooves. Today, most Lipizzans are grey, although solid colours are seen very occasionally. Their coat appears white, but their skin is black, whereas true ‘white’ horses have unpigmented skin. Foals are born with dark coats and become lighter every year until finally turning white-grey between the ages of 6 and 10. Lipizzans are intelligent and docile, and tend to live longer and mature more slowly than the average horse. Some of the stallions at the Spanish Riding School are still performing well into their 20s, and live into their 30s!

Modern day Lipizzan: Today the Lipizzan is best known as the breed used by the Spanish Riding School in Vienna. Outside of classical riding and horsemanship, Lipizzans compete very successfully in dressage and driving and make wonderful pleasure mounts. They are also often used in films and TV shows thanks to their striking appearance and abilities. There are less than 3,000 Lipizzans in the world at present, largely spread between Europe and the US. Extreme care is taken by breeders all over the world to ensure that the purity of the Lipizzan remains uncompromised and the breed standard is upheld.