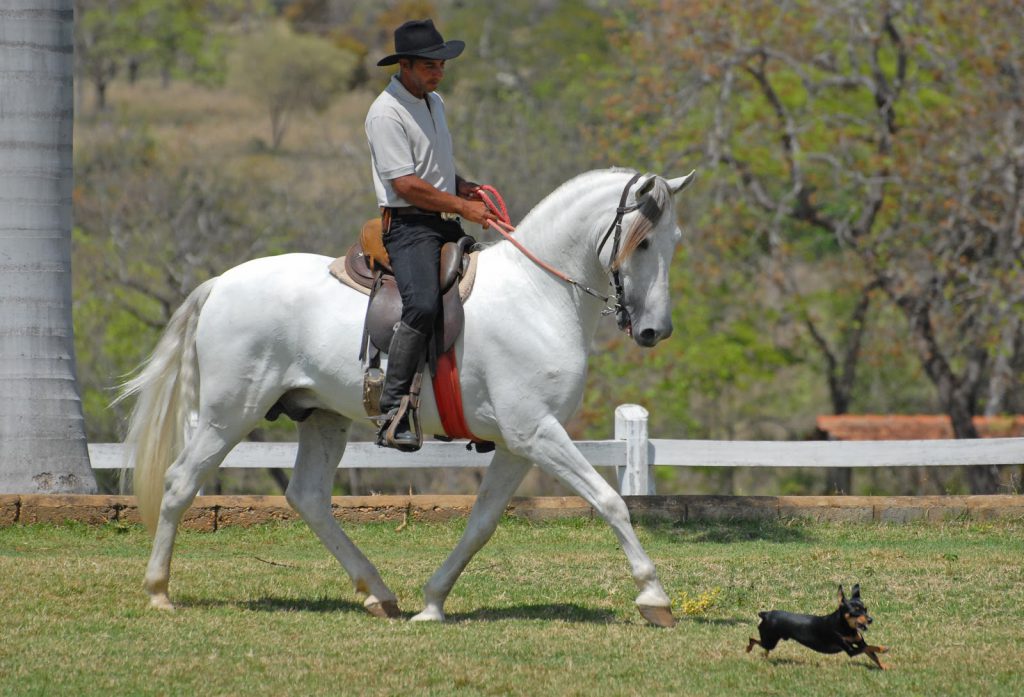 Breed origin: The Mangalarga Marchador is the national horse breed of Brazil, where it numbers over half a million! It descends largely from Iberian stock brought to Brazil by the Portuguese royal court, which fled from Napoleon’s armies in the early 19th century. With them came the finest Alter Real horses, which were bred exclusively at the royal stud in Alter. Taking these prized horses to Brazil turned out to be a very wise decision, as the stud in Alter was sacked by Napoleon and closed in 1834.

Once settled in Brazil, the Baron of Alfenas began breeding horses at the hacienda Campo Alegre, where the stock consisted of Lusitanos, Spanish Jennets, Barbs and Andalusians. The Spanish Jennet in particular was known for its fast, smooth amble, much prized on the haciendas where farmers spent most of their day in the saddle! The foundations for the Mangalarga Marchador were laid when Dom Pedro I, who later became the Emperor of Brazil, gave the Baron of Alfenas an Alter Real stallion called Sublime. The Baron bred Sublime to the mares at Campo Alegre, and many of the offspring (known as Sublimes) had incredibly smooth gaits, including the cadenced, rhythmic gait known as the marcha. A hacienda called Mangalarga acquired stock from Campo Alegre and became so well-known for these horses that they became known as Mangalargas. Their comfortable, efficient ‘marcha’ was highly valued, contributing to the second part of the name: ‘Marchador’.

Since then, the Mangalarga Marchador has been selectively bred for over 180 years, its original traits carefully maintained and its marcha honed into two gaits: the marcha batida and the marcha picada. With the Spanish Jennet now extinct, these gaits are unique to the Mangalarga Marchador. These paces are incredibly efficient and are probably the main reason that the breed holds the Guinness World Record for an endurance ride of 8,694 miles – a feat that took one and a half years to complete!

Distinguishing features: Valued for their beauty, intelligence, excellent temperament and silky smooth gaits, Mangalarga Marchadors are also noted for their endurance and versatility. They have four gaits: walk, marcha batida, marcha picada and canter. You read that right: they do not trot! Both marcha gaits are known for the fact that at moments, three hooves are on the ground at once. This is called ‘triple support’ and makes for an exceptionally comfortable ride. In the marcha batida, the feet move diagonally in a way that resembles the fox trot, whereas in the marcha picada, the feet move laterally and separately, creating a four-beat rhythm. The pace of the marcha can be moderate or fast, and it can be sustained easily for hours by both horse and rider.

As far as conformation goes, Mangalarga Marchadors have a classical Baroque frame, being compact and muscular yet refined and noble. They are tireless and willing workers, yet they hold themselves regally and turn heads wherever they go. Their head is triangular with a straight profile and a rounded nose, traits inherited from their Barb ancestors. Their mid-length neck is muscular and well arched, with a deep thorax giving them tremendous lung capacity, which in turn helps account for their incredible stamina. They have long, oblique shoulders, pronounced withers, a deep, broad chest, a strong, straight back, short, well-muscled loins and powerful hindquarters. Their legs are long, well-defined and muscular, with good bone and solid, rounded hooves. Mangalarga Marchadors stand around 14.2 to 16 hands high and are typically grey, bay or chestnut, although many other colours are seen including black, palomino, buckskin, roan and pinto.

Modern day Mangalarga Marchador: There are believed to be over half a million Mangalarga Marchadors in Brazil today, and they are increasingly popular in the USA and Europe. Exceptionally rideable and intelligent, they lend themselves to a vast array of uses, from ranch work to showing to endurance riding to cross country to polocrosse. Like most Iberian breeds, they have excellent cow sense and can turn on a dime, making them a popular choice for sports such as cutting and reining.

If you’re lucky enough to join us for a Globetrotting adventure in Brazil, you may have the chance to ride one of these beautiful horses on your horse riding holiday!