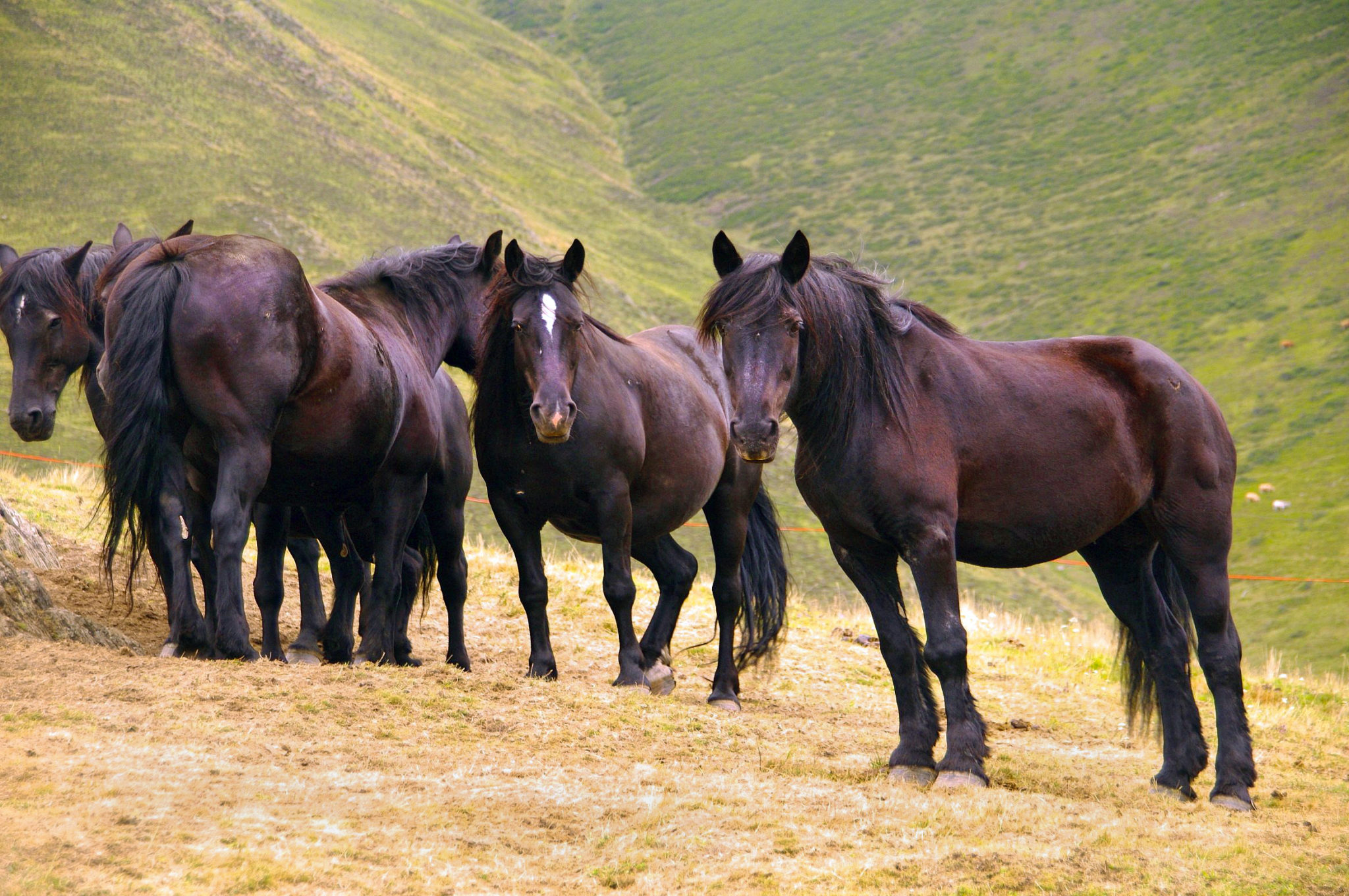 Name of breed: Mérens, also known as the Ariégeois pony.

Country of origin: Southern France (the Pyrenees and Ariégeois mountains) and Northern Spain (near Andorra)

Breed origin: The Mérens horse is thought to have emerged in prehistoric times, although the early history of the breed remains a mystery. It could have come from the Iberian Peninsula in modern-day Spain and Portugal, or it could have been brought to the Ariège Pyrenees by settlers from the east. Whatever the case, its ancestors are believed to have lived in the Pyrenees mountains near Andorra for at least 15,000 years, since the end of the last glacial period. Nearby, in Niaux Cave, there are 13,000 year old cave drawings depicting horses with a striking resemblance to the Mérens. Having such a deep connection to its homeland, the breed features in many of the native people’s legends and stories. It has been used by local farmers for many centuries, its surefootedness and agility enabling it to work on the steep slopes with ease. Farm work in the mountains included such tasks as ploughing, tilling, hauling and carrying loads.

Over the centuries, the Mérens has been used by all manner of people to transport goods over the mountains – even smugglers! The breed was also used by miners, winemakers and even gardeners, being famed across the mountains and beyond for its endurance, sense of direction, athleticism, soundness and ability to survive on poor fodder. Mérens horses were prized by soldiers in the Middle Ages, favoured by Charlemagne during his reign as King and Emperor, and used by Napoleon to pull artillery for his Grand Army. Although they gained a reputation as excellent light cavalry horses in the late 19th century, at the same time, the population took a major blow due to uncontrolled crossbreeding. In an effort to save the Mérens, in 1908 the president of the Agricultural Society of Ariege was given control of breeding. This proved a wise move, and kept the breed alive throughout World War I and II, when many other European breeds were threatened with extinction. This was despite – or possibly even partly due to – the Mérens being used to draw artillery in the mountains. Indeed, it was only once this practice ceased that the breed numbers started declining.

Although the Mérens was still used for agricultural work (and sadly also bred for meat) until the 1970s, by that stage, only 40 horses remained. They were saved from extinction by unlikely allies: communities of hippies who moved to the Ariége mountains to escape from mainstream society, boosting the local economy and encouraging the breeding of these beautiful black horses. Simultaneously, efforts were made to promote the Mérens as a fashionable pleasure mount. As a result, by 1985, the population had risen to 4,000! Since then, the Mérens has been a key component of France’s horse breeding efforts. Although it makes up only about 2% of the country’s total equine population, it is considered highly important for maintaining the genetic diversity of French breeds.

Distinguishing features: There are two general types of Mérens: the original type, a small, light horse well adapted to the mountains, and the modern type, which is taller and sportier. They are always black, although their coat sometimes takes on a rusty sheen, and many horses have dapples. The breed standard lists the ideal height as between 14.1 and 15.1 hands high, although some mountain-bred Mérens are as small as 12.2 hands! Despite their height, they are classified as horses, not ponies. Their build is strong, compact and elegant, and they have energetic movements. Their head is straight or slightly concave, with small ears and a ‘beard’ of longer hair along their jawbone. They have a short or mid-length neck with good muscling, sloping shoulders, a wide, deep chest and wide withers. The back varies in length, but Mérens horses always have a deep girth and a strong croup. Their short, strong legs have good bone and well-defined joints, and hiding underneath their feathered fetlocks are large, solid hooves that rarely need shoeing. In their native mountains, many Mérens live semi-wild for all or part of the year. This age-old practice maintains the breed’s hardiness, stamina and balanced temperament. Mérens horses may be small, but they have big personalities! They become devoted and loyal to their handlers and are calm, willing partners.

Modern day Mérens: The breed is becoming increasingly popular and stud farms now exist in Italy, Belgium, Germany, Switzerland and the Netherlands, as well as across France. Mérens horses are still used for their traditional jobs in the mountains of southern France and northern Spain, and they also excel under harness. However, they are mostly used for riding, especially trekking and trail riding, where their agility and sensible temperament come to the fore. They are versatile enough to excel in all manner of disciplines, and their potential is still being explored.