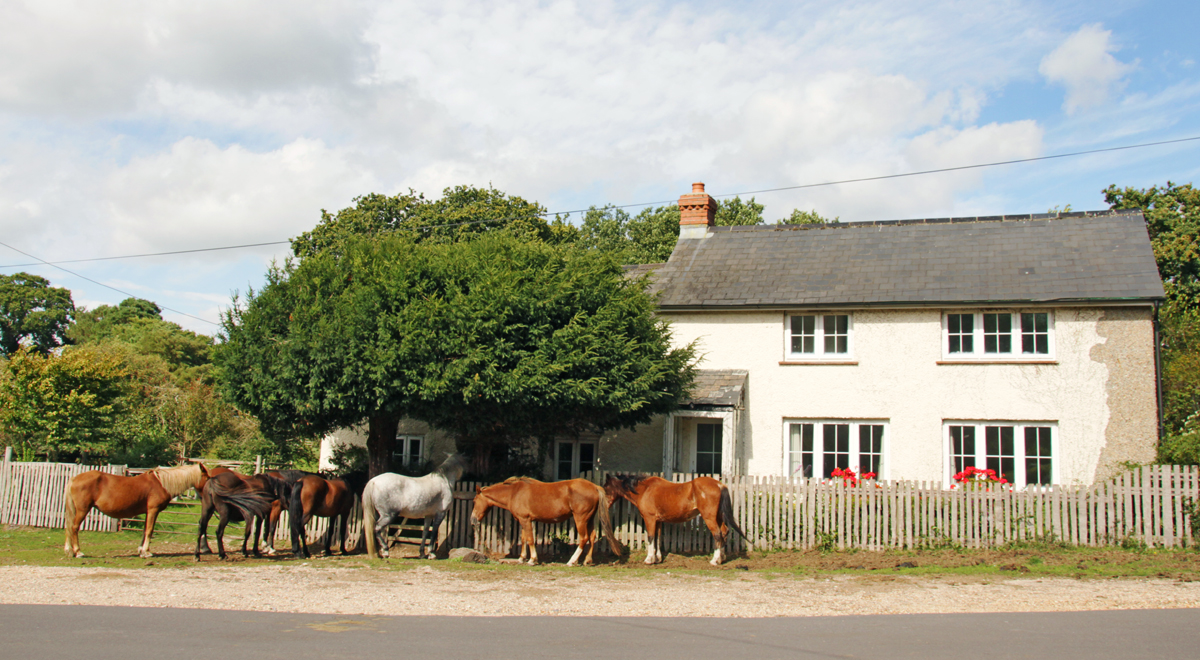 Breed origin: The ancestors of the New Forest pony roamed the woods and heath of the New Forest before the last Ice Age! The forest itself has been protected since William the Conqueror reserved it as his ‘new hunting forest’ in 1079, and the development of the breed is closely linked to William’s activities as a hunter and a horse enthusiast. He established a system to maintain and protect the forest which is still in place today, with ‘verderers’, ‘agisters’ and ‘commoners’ all playing their part. It’s the commoners who are of particular interest to us – because although New Forest ponies appear wild, they are in fact domesticated. The commoners have the right to ‘common pasture’ in the forest, and to this day still graze their sheep, cows, donkeys, pigs and horses on the common lands. The horses are brought in annually and sorted: some are kept and broken in, some sold, and some returned to the forest. This also means that not every horse seen in the New Forest is a New Forest pony: commoners can put any breed they like onto the shared land. But only approved purebred New Forest stallions are permitted to run with the mares, maintaining a high breed standard.
Henry VIII played a large part in the breed’s development in the 16th century by introducing Welsh bloodlines and having the smallest New Forest ponies culled! Then in 1765, the Thoroughbred stallion, Marske, most famous as the sire of Eclipse, was brought to the New Forest and serviced the local mares. This was followed by breed improvements sanctioned by Queen Victoria which involved crossing New Forest mares with Arab and Barb stallions. Since then, other popular breeds such as the Fell, Highland, Dartmoor, Exmoor and Welsh have all been added to the New Forest pony’s gene pool. Although the breed now has very mixed bloodlines, the environment of the New Forest region continues to define its character and conformation. Since 1930, only purebred stallions have been turned out on the common lands, and the breed is now exported all over the world as a strong and versatile riding pony.

Distinguishing features: New Forest ponies are a working-type breed: tough, sure-footed, agile and level-headed. They are willing, easy to train and intelligent, with their temperament described as ‘ideal’. Their sloping shoulders give them an excellent canter with a long, low action. They have a deep girth, slender but strong legs, hardy feet and powerful hindquarters. Their head is pony-like, with large, gentle eyes and well-defined cheekbones. They come in all colours except skewbald, piebald, spotted and blue-eyed cream, and stand no more than 14.2 hands high.

Modern day New Forest pony: There are over 3,000 ponies roaming wild in the New Forest and the commoners still use them as work horses. They are frequently sold at the nearby Beaulieu horse fair, attracting large crowds of prospective buyers. They make excellent mounts for riders of all ages and abilities. They can turn their hand to pleasure riding, showing, jumping, dressage, cross country, driving and eventing.