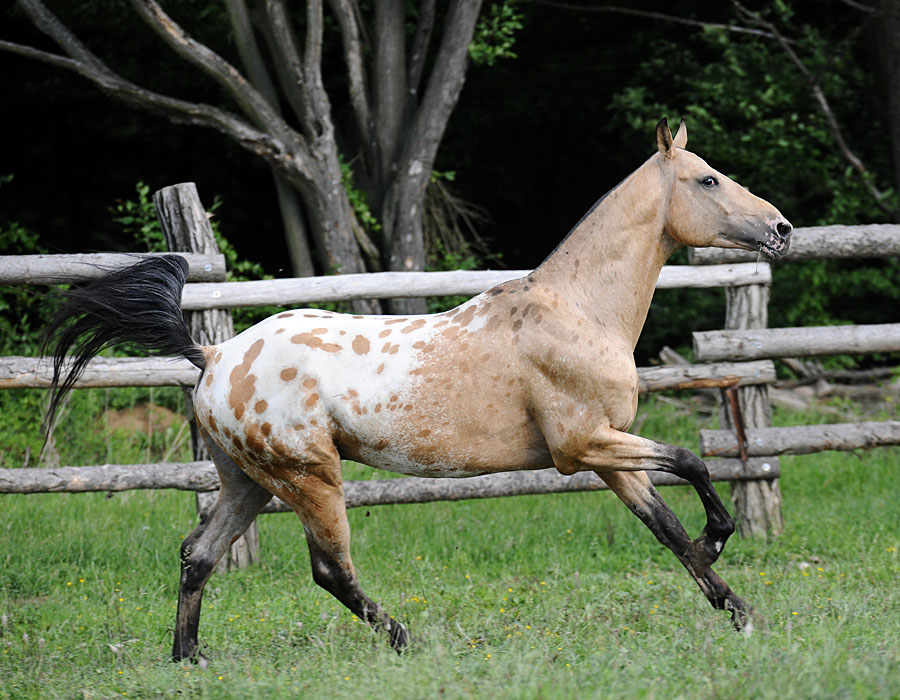 Breed origin: The story of this breed is almost as old as the Nez Perce people, or the Nimiipu, as they are sometimes called. This tribe lived on the rich grasslands of the Palouse in North America and were known as the best horsemen on the continent. They had been selectively breeding horses for centuries, although it’s still up for debate whether the Nez Perce brought horses to North America when they migrated across a land bridge, or whether they became horse people after Russian fur traders left their horses behind. Either way, there are distinct similarities between the lean, spotted horses that feature in Eastern art and legends and the Ma’amin – the horses of the Nez Perce. By the time European explorers got to the Pacific Northwest in the early 19th century, this was the biggest herd of horses on the continent, and the tribe’s greatest source of wealth and pride. A journal from the period reads, ‘Their horses appear to be of an excellent race: they are lofty, elegantly formed, active and durable: in short many of them look like fine English horses and would make a figure in any country.‘

The Nez Perce lived in prime buffalo country, and their horses were bred to be superior hunters, while remaining gentle and loyal enough to be ridden by everyone from children to elders. As well as hunting, they were used to transport people and loads, do battle and – most memorably – to flee. You see, while the Nez Perce were famed warriors and managed to survive a great many attacks from explorers, settlers and the U.S. Cavalry, in 1877, an order was given for the Wallowa band of Nez Perce to leave their homeland forever. Although forced to comply, violence erupted on both sides and around 800 people and 2,000 horses fled north. For five months, they contuniously outran and out-manoeuvred the Cavalry over a distance of 1,500 miles. The Ma’amin horses carried their people over unforgiving terrain through all extremes of weather, turning to do battle when necessary only to carry on without rest, surviving on what they could forage. Finally, just a few miles from Canada (where they aimed to seek asylum), the Cavalry intercepted the Nez Perce and they surrendered. Most of the herd that survived this incredible feat of endurance was either shot or taken by the Cavalry, who had been eyeing off these impressive horses for a long time. However, no attempts were made to keep the breed pure, and it was all but extinct by the time the Appaloosa (which stemmed from the same herd) was brought back into the public eye.

While the Appaloosa still had the distinctive spots of the original Ma’amin horses, by the mid-20th century it had been out-crossed to so many other breeds that it had lost many of the traits that its ancestors were famed for. Although handsome, muscular and versatile, it was not the lean, hardy endurance champion of days gone by. The Nez Perce people had also lost their nomadic lifestyle along with their horses, and turned to agriculture as a means of survival in the rapidly-modernising world that was the United States. However, in 1994, the Nez Perce tribe in Idaho acted to reclaim their identity as horse people and bring back the qualities of their original herd: they started a new breeding program. Foundation Appaloosas were brought in, as well as a number of original-line Ma’amin horses that had been kept pure on a ranch in the Wallowa Valley. This alone wasn’t enough, though. The final piece in the puzzle came all the way from Turkmenistan: the Akhal Teke. An ancient breed, it was kept pure in its homeland for thousands of years, and having spread to Russia, was likely an ancestor of the original Ma’amin horse. Whether this is true or not, the Akhal Teke provided exactly the influence that the Nez Perce were looking for, and the revived breed – now called the Nez Perce – very quickly took on the attributes of its ancestral herd. As a result, the Nez Perce people regained their legacy as skilled horsemen and discerning breeders, benefitting their tribe in myriad ways.

Distinguishing features: The Nez Perce is often described as looking like a lean runner, with a slender body, long back, and narrow yet strong shoulders and quarters. The breed has a fine head with a straight profile and expressive eyes. Many Nez Perce are gaited, too, making them very comfortable to ride. They are renowned for their incredible stamina, toughness, speed, intelligence, courage and pride. Few other breeds are as thrifty and athletic as the Nez Perce. With the original Nez Perce, the original Appaloosa and the Akhal Teke all sharing a history of tribal breeding, the modern Nez Perce thrives as a member of the family: gentle, people-oriented, loyal and willing. While many Nez Perce are solid colours such as palomino, buckskin or bay, appaloosa markings are still quite common, and striped hooves and mottled skin are seen regardless of colouring. Most Nez Perce have a fine mane and tail, and some have a sheen to their coat reminiscent of the Akhal Teke. They stand around 15 to 16 hands high.

Modern day Nez Perce: This rare breed is under the careful management of the Nez Perce Tribe and associated breeders, who are continuously progressing towards the ultimate goal of reviving the original Nez Perce type. Being a high quality horse of a distinctly different ‘type’ to the Appaloosa and other popular stock horse breeds in the US, it has already garnered a devoted following. The Nez Perce excels at trail riding, endurance racing, hunting and jumping, but it is most popular as an all-round work horse and pleasure mount.