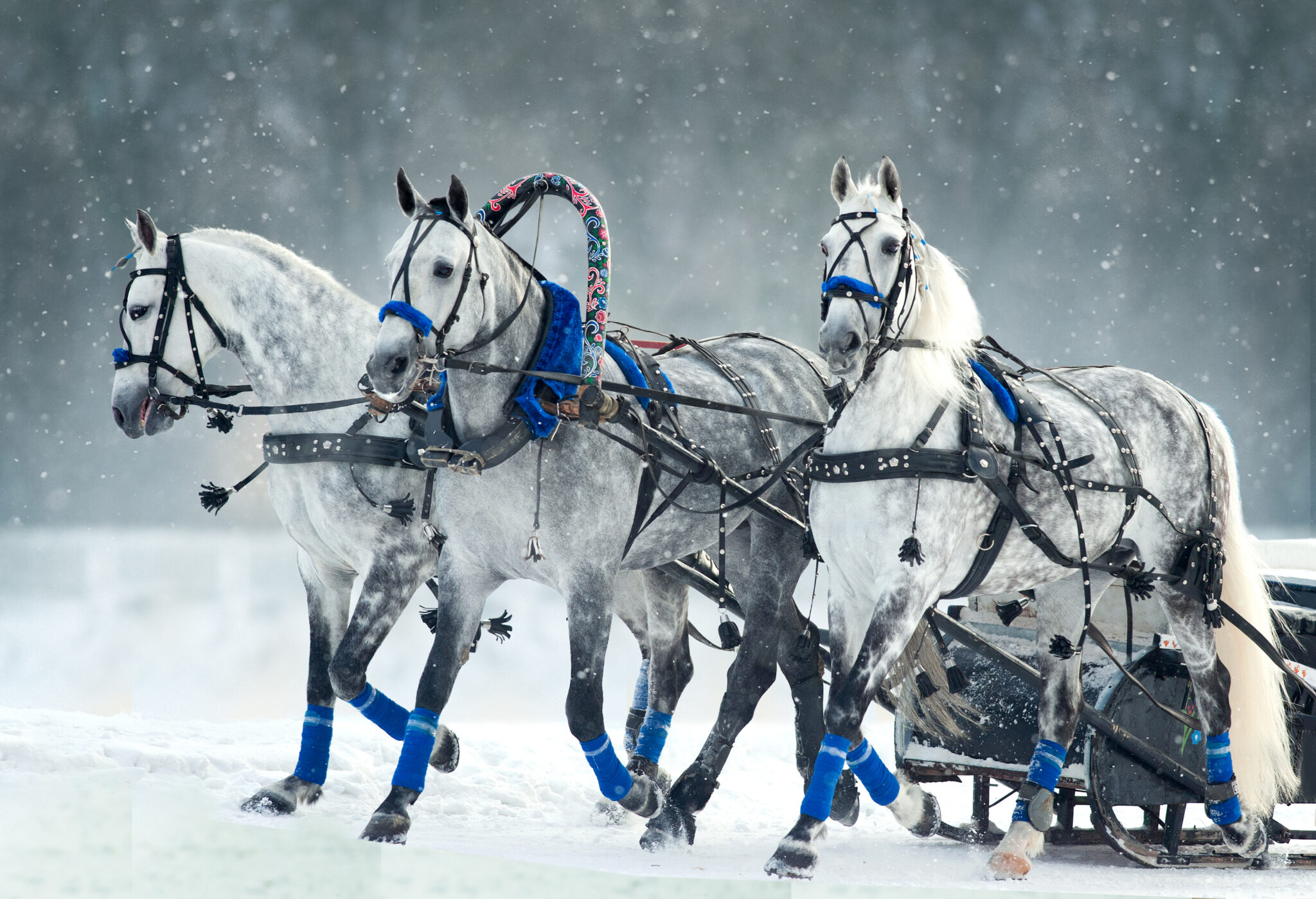 Breed origin: The Orlov Trotter is Russia’s oldest and most famous ‘stud’ breed, renowned for its speed, stamina and fast-paced trot. The breed was developed in the late 18th century by Count Alexei Orlov, hence the name. Count Orlov set out to develop a light harness breed that could withstand Russia’s harsh climate, terrible roads and the long journeys that were part of Russian life. Being a member of the aristocracy, he also wanted to produce a breed with an impressive action and elegant appearance. There were no ‘trotters’ in Russia at the time and the Count was a man on a mission. He imported thousands of horses from Arabia, Persia, Turkey, the Caucasus, Poland, Italy, Spain, Holland, Germany, England and Denmark, amassing a herd of around 3,000 horses! His intention in setting up such a huge operation was to speed up the development of the breed, and he certainly succeeded. In just three generations, the desired traits of the Orlov Trotter had been attained. The primary bloodlines were Arabian, Friesian, Danish, Dutch and Mecklenburger. Having begun breeding in the 1770s, the stud produced the grey stallion Bars I in 1784, and with him the foundation of the breed was laid. Bars I was a big, strong, agile horse with excellent conformation and a swift trot. He passed these traits on to his offspring, with the two best colts chosen to carry on the development of the breed. All modern Orlov Trotters can be traced back to one of these two stallions.

From the 1830s onwards, the Orlov Trotter spread throughout Russia and rapidly became the favoured harness horse for both transport and racing. The breed influenced just about every other breed in Russia and was crossed with Standardbreds to produce the Russian Trotter. Sadly, this crossbreeding combined with the World Wars, the Russian Revolution and Civil War, and widespread deterioration of agriculture in the country led to severe deterioration of Count Orlov’s breed. Massive efforts had to be made to re-establish this and many other breeds, and progress was slow throughout the 20th century. Emphasis on speed – the trait required for racing – increased as horses became less necessary as a mode of transport. Standardbreds and Russian Trotters are generally faster than Orlov Trotters, so even as the studs were re-established, public interest in the breed waned, and the population of Orlov Trotters has fluctuated ever since. The International Committee for the Protection of the Orlov Trotter was established in 1997, and the Committee’s initiatives have gone a long way towards re-popularising the breed.

Distinguishing features: Orlov Trotters are taller and more robust than most trotters. The breed is characterized by a big head, large, expressive eyes, a long, high-set ‘swan neck’, prominent withers and a broad croup. The chest is deep and broad, with a muscular body, well-sprung ribs, sloping shoulders and a long back. The breed has clean, square-set legs with well-defined joints and tendons. Overall, Orlov Trotters appear well-proportioned and elegant, with a light yet powerful build. Thanks to their Arabian influences, most Orlov Trotters are grey, although they can also be found in black, bay and chestnut. On average, they stand around 16 hands high.

Modern day Orlov Trotter: Purebred Orlov trotters are now bred in 15 stud farms: 12 in Russia and 3 in Ukraine. The studs in Russia have a total of around 800 mares, less than the 1,000 mares generally considered necessary to sustain a breed. However, there is hope: Orlov Trotters are a versatile and hardy breed, and beautiful as well, making them ideal for a range of purposes. In Russia and Scandinavia, they are popular harness racing horses. They excel at racing in the Russian troika harness, which requires the outer two horses to gallop and the middle horse to trot. Thanks to their size and strength, Orlov Trotters are also used as draught horses and farm horses.