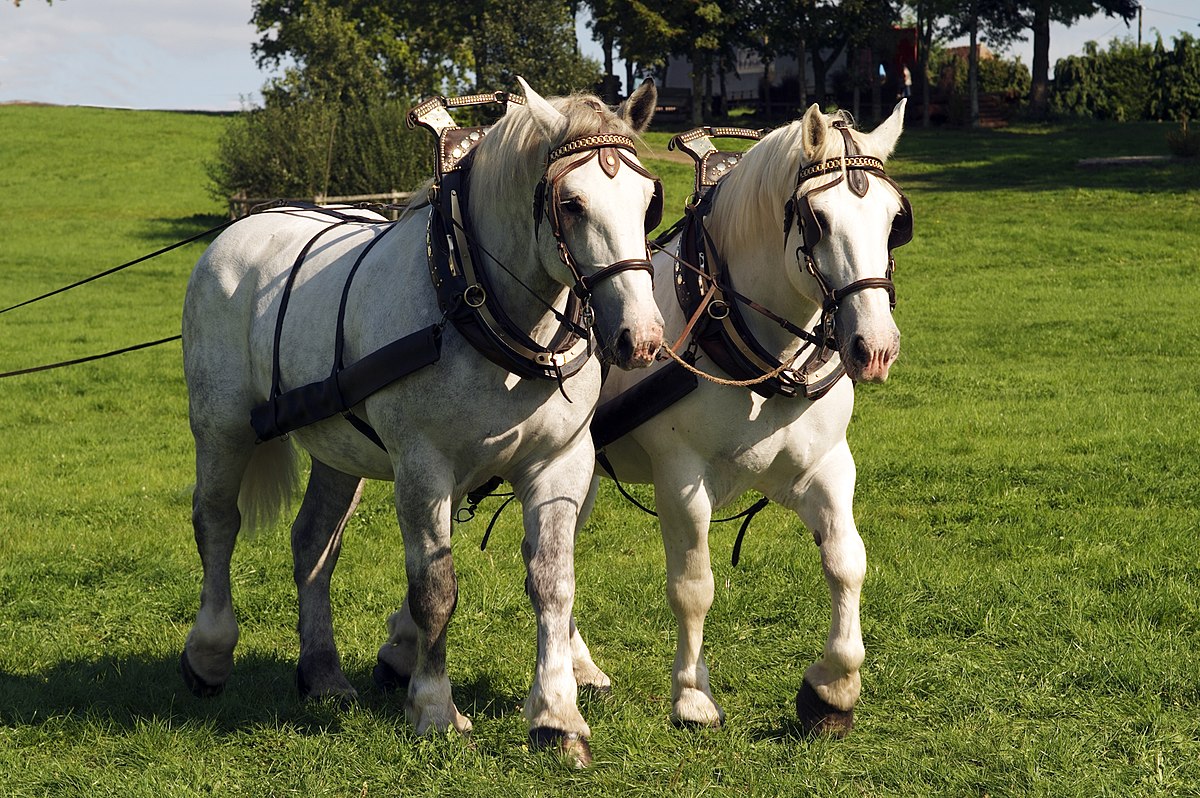 Breed origin: The Percheron is a breed of draught horse that originated in northern France, in the province of Le Perche, from which the breed takes its name. While the more ancient origins of the breed are subject to many differences of opinion, it is known that Arabian stallions were bred to local mares in the 8th century and again in the Middle Ages. Paintings of mounted French knights from this period always depict them astride grey horses, proving the immediate popularity of this primarily grey breed as a war horse.

When Percherons were no longer required to carry armoured knights into battle, emphasis turned to developing a powerful and elegant draught horse for pulling stage coaches. And when trains replaced stage coaches, the Percheron’s size was again increased to make it more suitable for agricultural work and heavy hauling.

Although importations of Percheron stock to America got off to a slow start, from the latter half of the 19th century until World War II, hundreds of thousands of Percherons were imported and bred to cater for the nation’s need for a versatile draught horse. In the 1930s, Percherons accounted for 70% of the draught horse population in the US, but their numbers declined substantially with the development of machinery for agriculture, transport and hauling. The breed came close to extinction in the US and numbers also declined elsewhere, with problems arising due to limited bloodstock. Finally, in the late 60s, the western world rediscovered the usefulness of draught horses and Percherons were once again in high demand. Their clean legs, hard feet and toughness saw them gain popularity in Australia and New Zealand, too, where they are still bred to station horses to create a large and strong working horse.

Distinguishing features: Percherons can stand anywhere from 15.1-18.1 hands high, weighing between 500 to 1,200 kilograms. They are generally grey or black, often with small white markings. Percherons are powerful and elegant, with a neat head and neck, a deep, wide chest and heavy muscling. They have a short, strong back, clean legs with plenty of bone and large hooves. Their movements are straight and bold, with a long, free stride. Percherons are intelligent, willing workers with a kind and docile disposition. Their hardiness allows them to adapt well to many tasks, conditions and climates.

Modern day Percheron: Today the Percheron is still used extensively for draught work, such as forestry, farming and hauling. Thanks to their striking appearance, Percherons are frequently used in parades, for sleigh rides and hayrides, and to pull carriages in large cities. Disneyland Paris boasts the largest team of working Percherons in Europe, where the breed makes up 30% of the horses in the park. Percherons are often crossed with light horse breeds to produce horses for competition, including dressage, hunting and show jumping. In Australia, you can also find purebred and cross-bred Percherons serving in the Mounted Police Force.