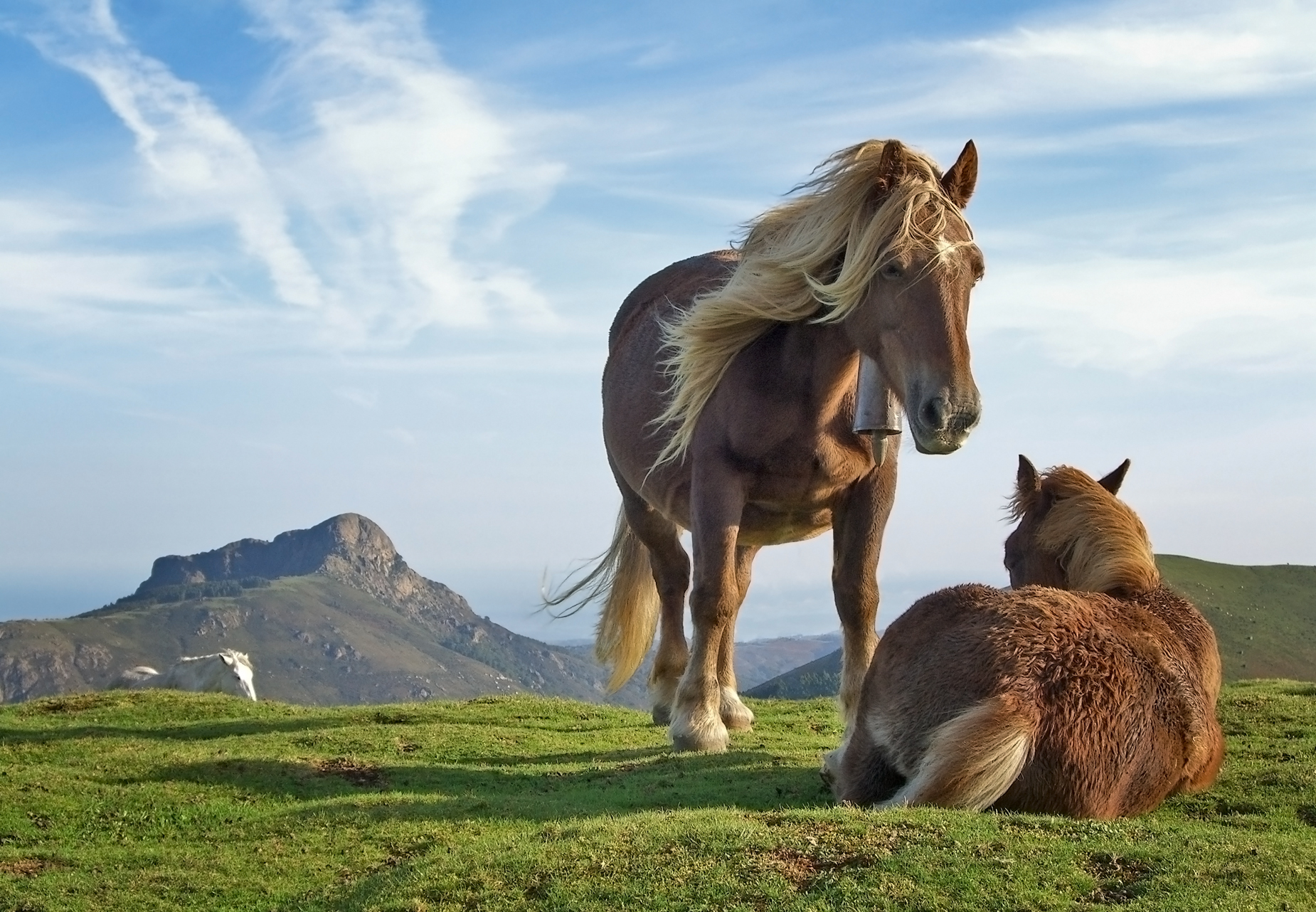 Name of breed: Pottok, or Pottoka. Also known as the Basque Pony.

Country of origin: The Basque Country in France and Spain

Breed origin: The Pottok is native to the Basque Country in France and Spain and is one of the most ancient horse breeds in Europe, although its origins are the subject of much speculation. Many believe Pottoks are descendants of the horses depicted in paleolithic cave paintings and bone carvings in the region, which would mean they have lived there for at least 10,000 years – and possibly more than 16,000 years. Some even put the measure at more than 40,000 years! Yet others say that Pottoks arrived during the Bronze Age, between 3200 BC and 600 BC. Whatever the case may be, it’s agreed that these horses are truly native to the Basque Country, and truly wild, having retained their primitive state throughout the ages. In Basque, the work Pottok (pronounced poh-tyok) means ‘little horse’, and they are indeed small, having been shaped by the mountains, valleys, flora and climate of their homeland. Historically, the Basque people were clever enough not to interfere with the breed’s natural traits or bring in other bloodlines; they valued these horses highly and used them for riding, hunting, pulling carts, transporting goods, farm work, and even in battle. When the horses were not in use, they roamed freely in wild herds.

However, in more recent times Pottoks have been treated with far less care. In the 19th century, and up until just a few decades ago, they were used as pit ponies in the French mines. Being so small, tough and docile, many Pottoks worked in the mines for most of their lives, only to emerge to be sold to meat factories. They also became popular circus ponies, with other bloodlines introduced to produce horses with piebald colouring. Meanwhile, the breed itself was in grave danger due to habitat loss and crossbreeding. They were no longer needed for farm work, with machinery taking over, and their habitat was being transformed into commercial farmland and forestry. Thankfully, from the 1970s, efforts were made to save the Pottok from extinction, with studbooks established and nature reserves created in which the wild herds can roam safely. Although no longer needed in everyday life, the Pottok once again came to be seen as a symbol of the ancient, native spirit of the Basque Country and its people.

Distinguishing features: Standing anywhere from 11.1 to 14.2 hands high, the Pottok is an incredibly tough breed that still lives mostly in wild, undomesticated herds. However, when Pottoks are brought into domestication, they are very docile, willing and friendly. They can live off sparse feed and require very little care in order to thrive. They are highly resistant to disease and have a great deal of common sense. Wild herds are able to sense incoming weather conditions, and move to high or low ground accordingly. Living in the mountains, Pottoks are  extremely surefooted and grow a thick winter coat called a borra, which can be as long as 10cm in young horses!

Depending on the studbook (there are a couple), Pottoks may be divided into ‘types’. in the French studbook, there are two types: the Mountain Pottok, which is smaller and lives most of its life wild in the mountains, and the Prairie Pottok, which lives on the plains and is larger and generally more domesticated. Regardless of their type, Pottoks have a large, square head, sometimes with a concave profile, small ears, a short neck and a long back. Their legs are short but slender and they have small, tough hooves. Their movement is smooth and balanced, making them ideal for both riding and driving, and they are strong enough to be ridden by small adults as well as children. Most Pottoks are chestnut, brown, bay or black, although piebald and skewbald are also seen.

Modern day Pottok: Pottoks are in increasingly high demand as children’s ponies thanks to their size, character and minimal care requirements. Efforts are also being made to ensure the survival of purebred Pottoks in the wild. Crossbred Pottoks have proven successful at dressage, jumping, three-day eventing, driving, and of course trekking. Although still an endangered breed, the Pottok is certainly on the road to recovery.