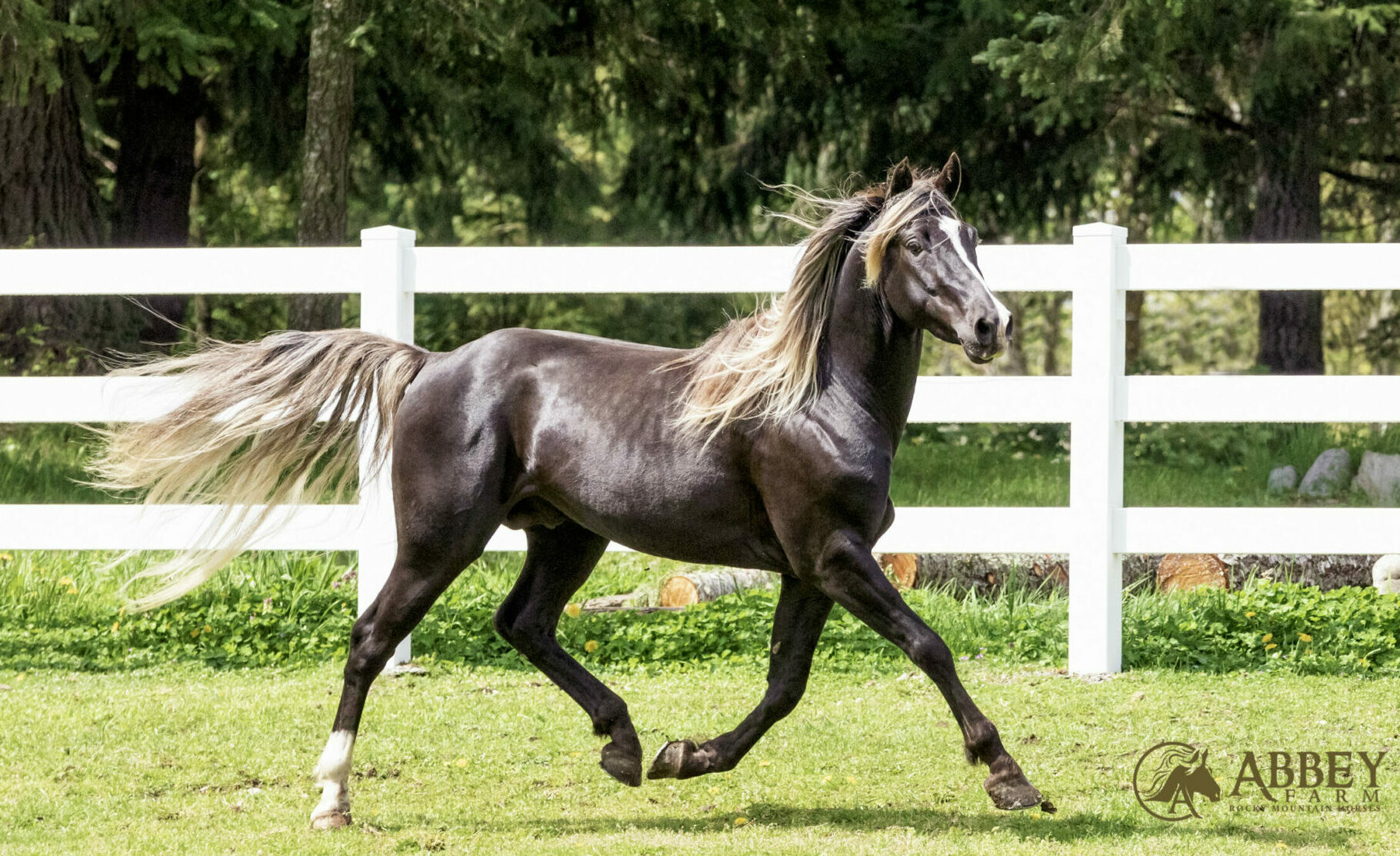 Breed origin: Despite its name, the Rocky Mountain Horse didn’t develop in the Rocky Mountains, but in the Appalachian Mountains in the state of Kentucky. According to legend, sometime around the late 19th or early 20th century, an anonymous traveller from the Rocky Mountains came to the Appalachian Mountains of eastern Kentucky with a young gaited colt. The colt’s body was the colour of chocolate, while his mane and tail were flaxen (the horse equivalent of blonde). He is thought to have descended in part from the now-extinct Narragansett Pacer, which was known for passing on its gaited ability, but little else is known about his ancestry. The traveller traded him for supplies and the colt was bred to local saddle mares. Soon enough, a local strain of horse had developed with a uniquely comfortable ambling gait, a strong build and a gentle temperament. These horses became prized on Appalachian farms, where their energy-conserving, four-beat gait made travelling through the hills a breeze and their toughness allowed them to easily withstand the Kentucky winters. They were strong and versatile enough to plough fields, work cattle, entertain the children, pull the family buggy and ride to town and back on their day off.

One of the most prominent breeders of the Rocky Mountain Horse was Sam Tuttle, who used his horses to take all manner of well-to-do guests trail riding through the rugged landscapes of Natural Bridge State Park. His stallion, Old Tobe, became the foundation stallion of the modern Rocky Mountain Horse. Old Tobe serviced mares until the ripe old age of 34, and was so gentle, comfortable and surefooted that he was the go-to mount for the inexperienced, the elderly and the very young. Five of Old Tobe’s sons were also recognised as foundation sires.

In 1986, the Rocky Mountain Horse Association was formed to promote and maintain the breed. There were only 26 horses registered in the first intake, but between 1986 and 2015, over 25,000 horses were accepted into the registry. The breed has spread to 47 states of America, as well as 10 other countries.

Distinguishing features: The Rocky Mountain Horse is best known for the chocolate-coloured coat and flaxen mane and tail that predominates among the breed. This colouration is caused by the silver dapple gene acting on a black base coat. Rocky Mountain Horses can be any solid colour, though, as long as they don’t have large white markings on their face or any white above their knees. They stand 14.2 to 16 hands high and have a strong, balanced build. They have a wide chest, sloping shoulders and an elegant head, with bold eyes and well-shaped ears. They are easy keepers with impressive hardiness, stamina and surefootedness. Rocky Mountain Horses are renowned for their wonderful nature and affinity with humans.

Rocky Mountain Horses don’t trot; instead, they have a natural four-beat ambling gait in which each hoof hits the ground individually: left hind, left fore, right hind, right fore. Because the horse always has at least one hoof on the ground, the bounce of a typical trot is removed, making for a supremely comfortable ride. This single-foot gait allows the horse to conserve energy while covering rough terrain at around 11 kilometres (7 miles) per hour and smooth ground at up to 26 kilometres (16 miles) per hour! To see a Rocky Mountain Horse in action, click here.