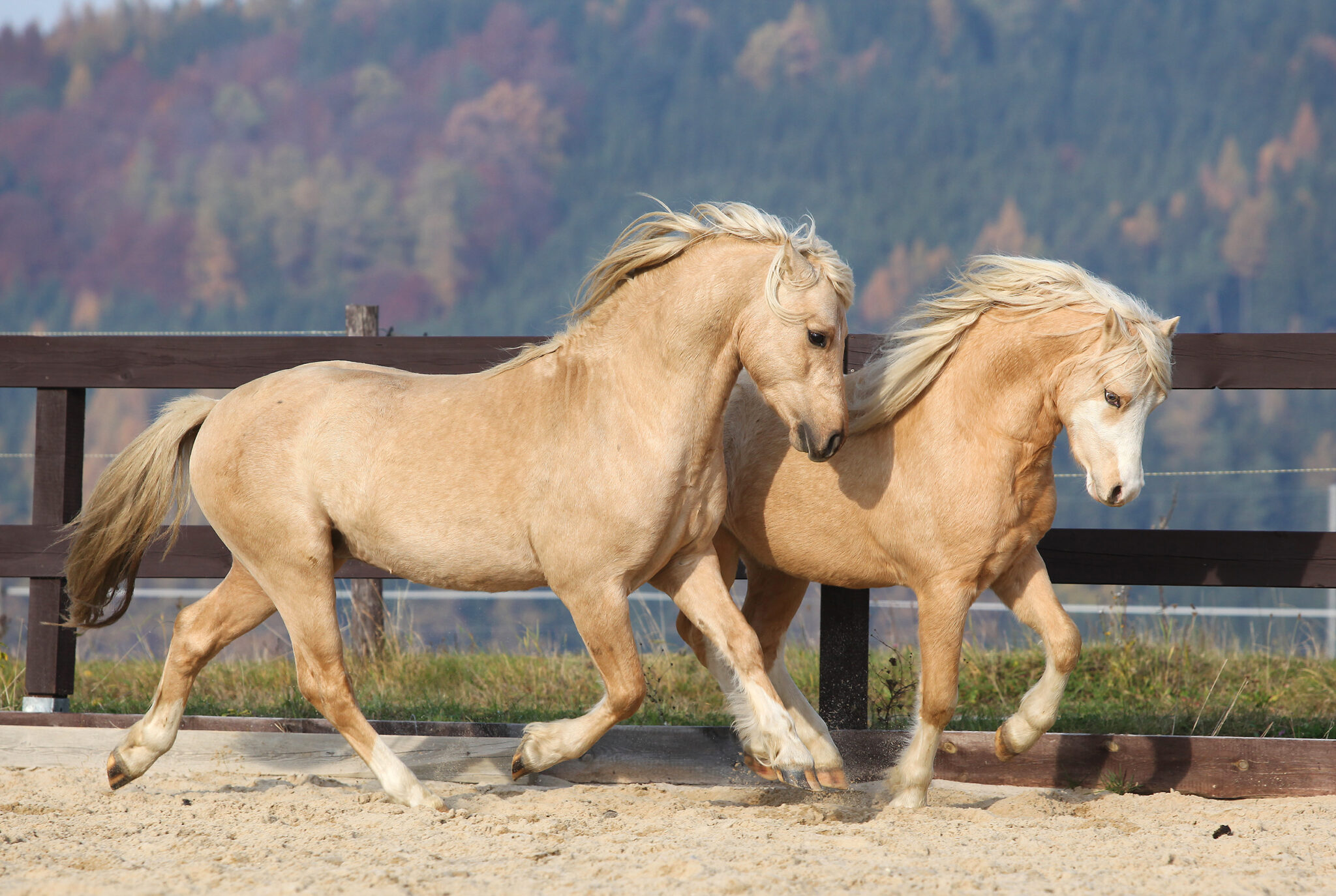 Breed origin: The Welsh Pony and Cob is technically four closely related breeds, all of which developed in Wales. There is evidence to suggest that a Welsh-type pony existed before 1600 BC, and these ponies were certainly well-established by the time the Romans reached Britain around 2,000 years ago. The Welsh Mountain Pony is believed to have evolved from this prehistoric Celtic pony. Over the centuries, only the toughest ponies survived the often-harsh conditions of their native country – not just surviving, but actually thriving on the sparse vegetation and challenging terrain. Infusions of Arabian blood, most likely thanks to the Roman occupation, account for the Welsh pony’s beautiful head and, to some extent, its lively action. However, on the whole, there were few outside influences on the breed, sheltered as it was in the remote hills and dells of Wales. As a result, it became an extremely pure breed capable of passing on its distinctive toughness, intelligence and stamina to the next generation without fail.

The Welsh Cob, which is significantly larger than the Welsh Mountain Pony but possesses many of the same characteristics, existed as early as the Middle Ages. It was developed as a war horse when knights returning from Spain and the Middle East brought back larger stallions to be cross-bred with the revered Welsh stock. The offspring were big and strong enough to carry an armoured knight into battle while retaining pony-like hardiness and stamina. These horses became known as ‘Powys horses’ and were used by knights and armies both in Britain and far abroad.

Not long after this medieval development, King Henry VIII decided that any horse not suitable for war was a waste of space and needed to be culled to improve the national stock. He ordered that every stallion under 15 hands high and every mare under 13 hands be culled. Luckily, at this point in history, many of Britain’s horses ran wild most of the year on the common lands. The Breed of Horses Act decreed that these ‘under-height’ horses were not allowed to run free on the commons, and when rounded up, needed to be destroyed. So the Welsh simply left their ponies to run wild in the hills, ensuring that only the larger cob-type animals were rounded up and kept close to home. Henry VIII’s bright idea turned out to be a bit of a disaster for both the common lands and the national horse stock, as the pastures declined in quality year by year thanks to the far greater feeding requirements of the larger horses. Consequently, it wasn’t too long before his successor, Elizabeth I, partially repealed the Act and Britain’s pony breeds were saved from extinction.

Whether in times of peace or war, the Welsh Pony and Cob have always been necessarily versatile horses, being required to perform a huge range of tasks for the families who owned them. Over the centuries they have been used for all manner of farm work, transportation of both passengers and goods, coal mining, hunting, long-distance travel, and even racing. Harking back to those medieval days again, the Welsh Cob had to be able to keep pace with the larger fighting horses, whose natural gait was the trot. As a result the Cob developed a legendary, ground-covering trot that actually became the hallmark of the breed! Before the introduction of official breeding standards, Welsh Cob stallions were trotted uphill for 35 miles -and if they did it in under three hours, they were deemed fit for breeding. Before the advent of cars, the Welsh Cob was the fastest mode of transport in Wales, so this test was pretty important!

The Welsh Pony and Cob were also exported to British colonies in the 19th and 20th centuries, forming the foundation stock of many new breeds including the Australian Pony, the Pony of the Americas, the Morgan and the Welara. The Welsh Pony and Cob Society was established in 1901 and the first stud book was published in 1902. The stud book was separated into sections divided by type and height, which are today as follows:

Distinguishing features: Each section has its own characteristics, but all retain the ‘pony’ character, excellent temperament, versatility and toughness of Welsh breed. The most common colours are black, brown, grey, chestnut and bay, but all colours except piebald and skewbald are accepted. Feathering on the lower legs is common, varying depending on the section. They are reliable horses with friendly personalities, great intelligence and bold movement.

The Welsh Mountain Pony (pictured above on the right) is the smallest, and probably the oldest, Welsh breed. The maximum height is 12 hands, which, combined with its gentle temperament, makes it the perfect pony for young children. The Mountain Pony has a small head that tapers to the muzzle, often with a dished profile. The eyes are big and bold, the ears small and pointed, and the forehead wide. The neck is a good length and carried well, meeting long, sloping shoulders and a muscular back. The pony has a deep girth, well-sprung ribs, long hindquarters and a gaily-carried tail. It has incredibly strong, square-set legs with good flat bone, leading to round, dense hooves. The pony’s movement is quick, free and straight, with good flexion and powerful leverage.

The Welsh Pony is very similar to the Welsh Mountain Pony, but having a little more Arabian in its bloodlines, it is slightly taller and more emphasis is placed on its ‘riding pony’ qualities. The maximum height is 13.2 hands, so it’s still quite a small breed, and demonstrates all of the bone, substance, constitution, hardiness and great character of the Welsh Mountain Pony. The Welsh Pony’s action displays great quality and it has tremendous presence, as well as impressive jumping ability.

The Welsh Pony of Cob Type (pictured above on the left) combines the Cob’s strength with the Pony’s size in a breed standing 13.2 hands high or less. They have the heavier, more compact build of the Cob, rather than the comparatively light build of the Pony. The ultimate all-rounder, this pony excels at everything from hunting to driving to gymkhana sports to dressage, and can be ridden by children and adults alike. They are natural jumpers, being especially active and surefooted.

The Welsh Cob stands 13.2 hands high or more, with no upper height limit. The Cob is beloved around the world for its docile temperament, courage, incredible endurance, strength and agility. Despite its height, it retains the ‘pony’ character, making it ideal for riders of all ages and abilities. The Cob’s head is rather pony-like, with prominent eyes and neat ears. It has a relatively long, well-carried neck, strong but well laid-back shoulders, a deep chest and a muscular back. It has fairly short legs with strong joints and great bone, set square and leading to dense, well-shaped hooves. The Cob’s action is free, straight and powerful, with enough flair to catch the judge’s attention in the show ring. Like the Welsh Pony of Cob Type, it is incredibly versatile, and in high demand around the world as a result. Recently, it has been a popular choice for the sport of driving, and like all Welsh breeds, it excels at hunting and jumping.

Modern day Welsh Pony: Welsh Ponies and Cobs are a common sight today, with the ponies making perfect children’s mounts and the cobs proving successful in all manner of disciplines. There is almost nothing a Welsh Pony or Cob can’t do, and they can now be seen strutting their stuff in show rings and arenas worldwide – not to mention playing valuable roles as pleasure mounts, therapy horses, trekking horses and more.