With ANZAC Day today, April 25, I wanted to dedicate a post to two true blue Australian War Horse heroes from WWI. Staggeringly, in the First World War, 136,000 horses were sent overseas for use by Australian, British and Indian forces. To me, that number of horses is absolutely inconceivable. Tragically, only ONE horse from the 136,000 made it home to Australian soil. This heroic and surviving horse was Sandy  (pictured below), who belonged to Major General Sir William Bridges, who was killed in battle at Gallipoli. It was the Major’s dying wish to have his beloved horse sent back home to Australia to enjoy a long and happy retirement. 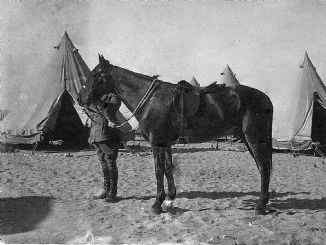 When the Major died, Sandy was put into the care of Captain Leslie Whitfield and was transported to Egypt then onto France in March 1916. It was in March 1917 that the Australian authorities granted Sandy a safe passage to return home to Australia, thus honouring the Major’s wishes. After six years of munching on lush green grass on Australian soils, Sandy was put down down in 1923. It’s remarkable to think that Sandy not only survived this brutal war but also went into battle against all of his natural instincts due to the trust he had in his rider.

Interestingly enough, the Walers, an Australian breed that constituted the majority of horses sent overseas from Australia during World War I, were sent to fight because they were considered hardier than European horses. Nonetheless, once arriving on foreign land, our Walers still suffered from a lack of food and water and often succumbed to skin diseases. The Waler was the backbone of the Australian Light Horse mounted forces.

Another Australian War Horse hero worth celebrating is well-known Waler ‘Bill the Bastard‘ (pictured below), who was Major M Shanahan’s mount. Cheeky ‘Bill the Bastard’ was known to buck when asked to gallop. Yet during World War I, when the Major found four Aussies outflanked by the Turks, ‘Bill the Bastard’ carried all five men to safety. Three on his back and one on each stirrup, he travelled over a kilometre at a lumbering gallop in soft sand – with not an inkling of a buck. What a herculean effort by this Waler.

At the end of the war, 11,000 surplus horses in the Middle East were sold to the British Army. Some light horsemen chose to destroy their horses rather than leave them on foreign soil. I can’t begin to imagine how heart-wrenching this situation must of have been for these soldiers. To have shed blood with your horse on the battlefield and not be able to honour the horse by organising its safe passage back to Australia must have been devastating.

I found this poem by a solider called ‘Trooper Bluegum’ –

Just crawling round old Cairo with a ‘Gyppo on his back.

No: I think I’d better shoot him and tell a little lie:–

May be I’ll get court-martialled; but I’m damned if I’m inclined