Little Sorrel was a sorrel (chestnut) Morgan horse who became the favourite mount of General Thomas J. ‘Stonewall’ Jackson in the American Civil War. Little Sorrel grew up in Connecticut and was purchased by the Northern government for use in the Civil War, but not far into his military career he found himself swapping sides.

In 1861, the cargo train on which he and a number of other Union horses were being transported was seized by the Southern forces, the Confederates. General Stonewall Jackson looked over the horses and bought two: Little Sorrel, who was small and quiet and seemed a perfect mount for Jackson’s wife, and a large, spirited stallion for himself. However, it soon became apparent that the stallion did not have the courage and obedience necessary to go into battle. The General tried Little Sorrel instead and fell in love, remarking, ‘A seat on him was like being rocked in a cradle.’

Despite being small and gentle, Little Sorrel was a typical Morgan: agile, fast and possessing incredible stamina. It is said that Little Sorrel’s endurance was such that on long marches, Jackson’s men often had to remind him when their own horses were burnt out! Little Sorrel’s unflappable disposition masked a cheekiness that earned him quite a reputation both during and after the war. He would often lie down on the picket line and be fed apples by the soldiers, and had a penchant for un-bolting stable doors and removing fence rails! Little Sorrel had absolute confidence, undoubtedly drawn in part from his rider’s: Jackson believed that he would die exactly when God had planned it, and from this belief he drew a fearlessness that inspired his whole army. 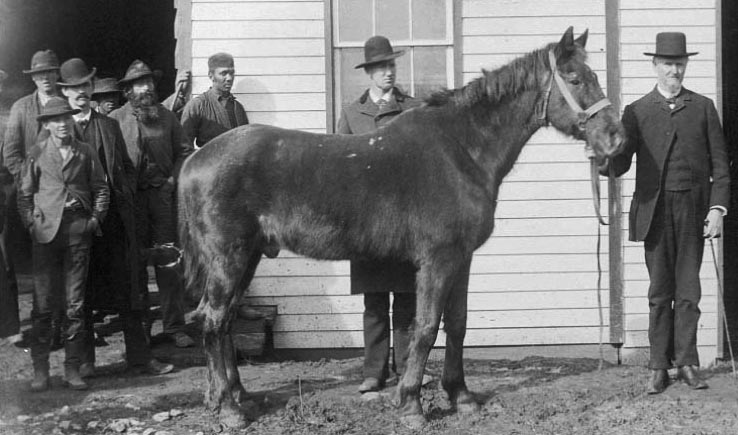 Stonewall Jackson rode Little Sorrel into countless Civil War battles including Sharpsburg, Fredericksburg and Chancellorsville. It was at the latter that Jackson was killed by friendly fire while riding Little Sorrel in battle. After Jackson was removed from his back, the horse remained on the battlefield to be found later by two soldiers, neither of whom recognised him. He was ridden by a soldier for several days before someone finally realised who he was – at which point he was given to another general, who returned Little Sorrel to Jackson’s wife, Anna.

For a time, Little Sorrel lived in peace on Anna’s father’s farm in North Carolina. Later, he was donated to the Virginia Military Institute, before being moved to the Confederate Soldiers’ Home in Virginia. He attended many county fairs and Civil War reunions, and the custom to pluck a lock of his hair as a keepsake became so popular that the horse had to have an armed guard to protect his mane and tail!

Little Sorrel died in 1886 at the ripe old age of 36. Reports say there was a round-the-clock vigil at his stall until he took his last breath. His funeral included mounted cavalry, infantry, a fife and drum corps, bagpipes and ladies in period dress, with various prominent speakers. Little Sorrel’s hide was tanned and mounted, and can still be seen today at the Virginia Military Institute.