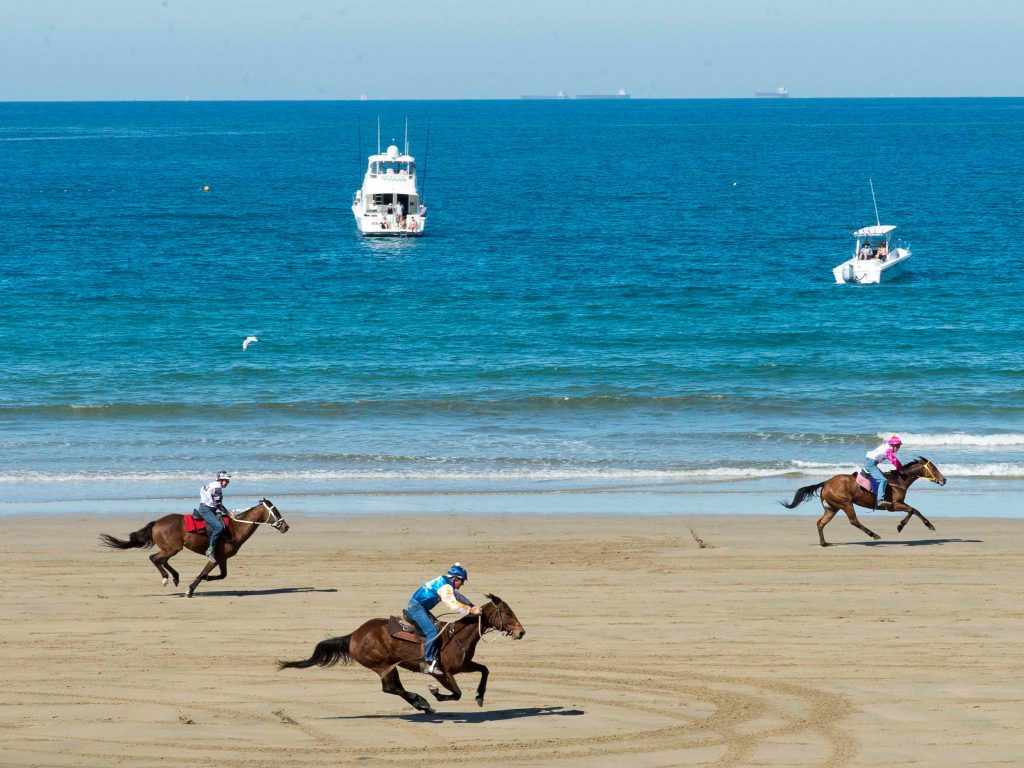 Disclaimer: Hey globetrotters, we’re aware that the above photograph isn’t actually a pic of Clydesdales racing. While other races are held throughout the day, the Clydesdales definitely draw the crowds. But do you think we could find a high res image to go with our blog post? No! We’ve searched high and low and haven’t found a high res photo that shows the clydesdales racing on the beach. So put your super sleuth hats on globetrotters and if anyone comes across a good pic (must be high res), please let me know!

Close your eyes and picture this globetrotters: a long stretch of white, sandy beach, a spectacular backdrop of Pacific Ocean and Whitsunday Islands, and the thundering of hooves as Clydesdales race along the sandy shores. It’s a canvas that can’t be replicated at any racecourse in the world and it’s in tropical North Queensland. Welcome to the Mackay Beach Horse Races.

An iconic event on North Queensland’s sporting and social calendar, the race day is attended by more than 3000 locals and attracts visitors from all around the country (and the world). But when you think of a race meet, the first thing that would most likely come to mind is thoroughbred horses thundering down the track. While there is some of this at the Mackay Beach Horse Races (with horses and their jockeys travelling from as far as Toowoomba and Mt Isa to compete), the real stars of the show are none other than Clydesdales!

A 350-metre strip of hard sand along the water’s edge serves as the racetrack for these massive animals, better known for their power and gentle natures than their speed. And while thoroughbreds know their job, it’s a different story and no easy feat for their much larger counterparts to get moving on the sand track. But when they canter, literally every stride feels like a jump! In order to prepare for the event, the horses are taken for rides along the beach to make sure they are happy with the sound and sight of waves crashing on the foreshore and the smell of sweater.

Clydesdale Dave was the lucky winner in 2017 and was ridden with blinkers on, so that he could block out the waves rolling towards him and simply focus on the racetrack ahead. But some, like Sherman, are not so obliging about their prospective race. When Sherman competed last year, he took about one stride, gave a little pig root as if to say “I’m not doing this!” then stopped dead in his tracks. Apparently it took him about four minutes to cross the finish line and the crowd gave an almighty cheer when he finished. I think it’s safe to say Sherman’s racing career was short lived!

As with any race meet, there’s plenty of entertainment OFF the track as well, with a coveted ‘Fashions on the Sand’ competition for spectators to take part in. It’s a family friendly affair and a wonderful, fun day for everyone to enjoy.