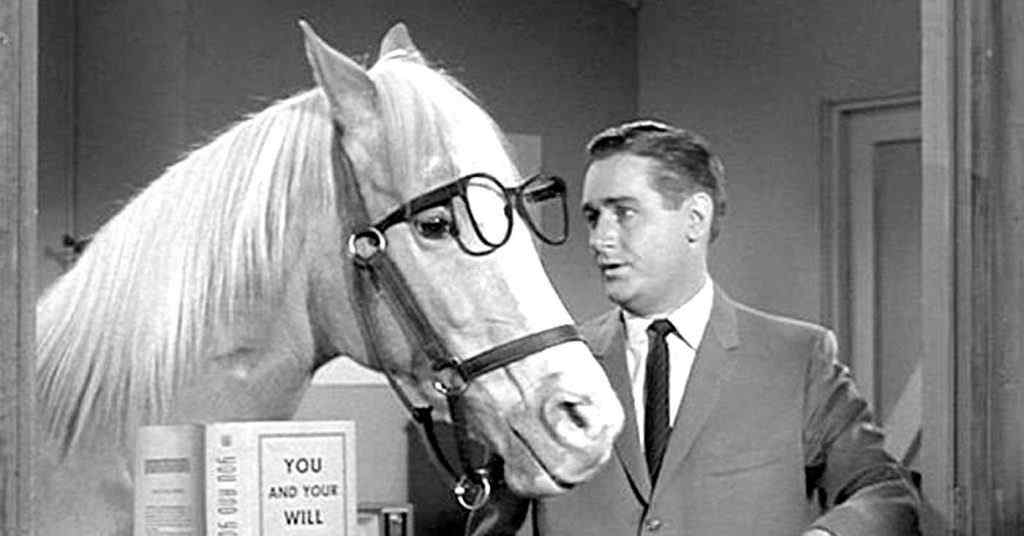 Mister Ed was a hugely popular American television sitcom in the 1950s and 60s, whose title character was a talking horse. The concept was derived from a series of short stories by children’s author Walter R. Brooks, which began with ‘The Talking Horse’ in the September 18, 1937 issue of Liberty magazine. It is believed the secretary of director Arthur Lubin, introduced him to the Brooks stories and is credited with developing the concept for television. Produced initially for syndication, the first 26 episodes were so well received the show was picked up by CBS in October 1961. Even Hollywood megastar, Clint Eastwood, had a cameo in one episode!

In effect, Mister Ed actually had two lead characters operating as a comedy team. The title role of Mister Ed, a talking palomino horse, was played by gelding Bamboo Harvester and voiced by former Western film actor Allan Lane. The role of Ed’s owner, a friendly but somewhat clumsy architect named Wilbur Post, was played by Alan Young (who passed away earlier this year). Many of the program’s gags follow Mister Ed’s tendency to talk only to Wilbur, thus causing a variety of hilarious opportunities and frustrations.

Ed’s ability to talk was never explained throughout the duration of the show. Only in the first episode, when Wilbur expresses an inability to understand the situation, does Ed offer the only remark on the subject: “Don’t try. It’s bigger than both of us!”

Does anyone have any fond memories of watching Mister Ed as a child globetrotters?