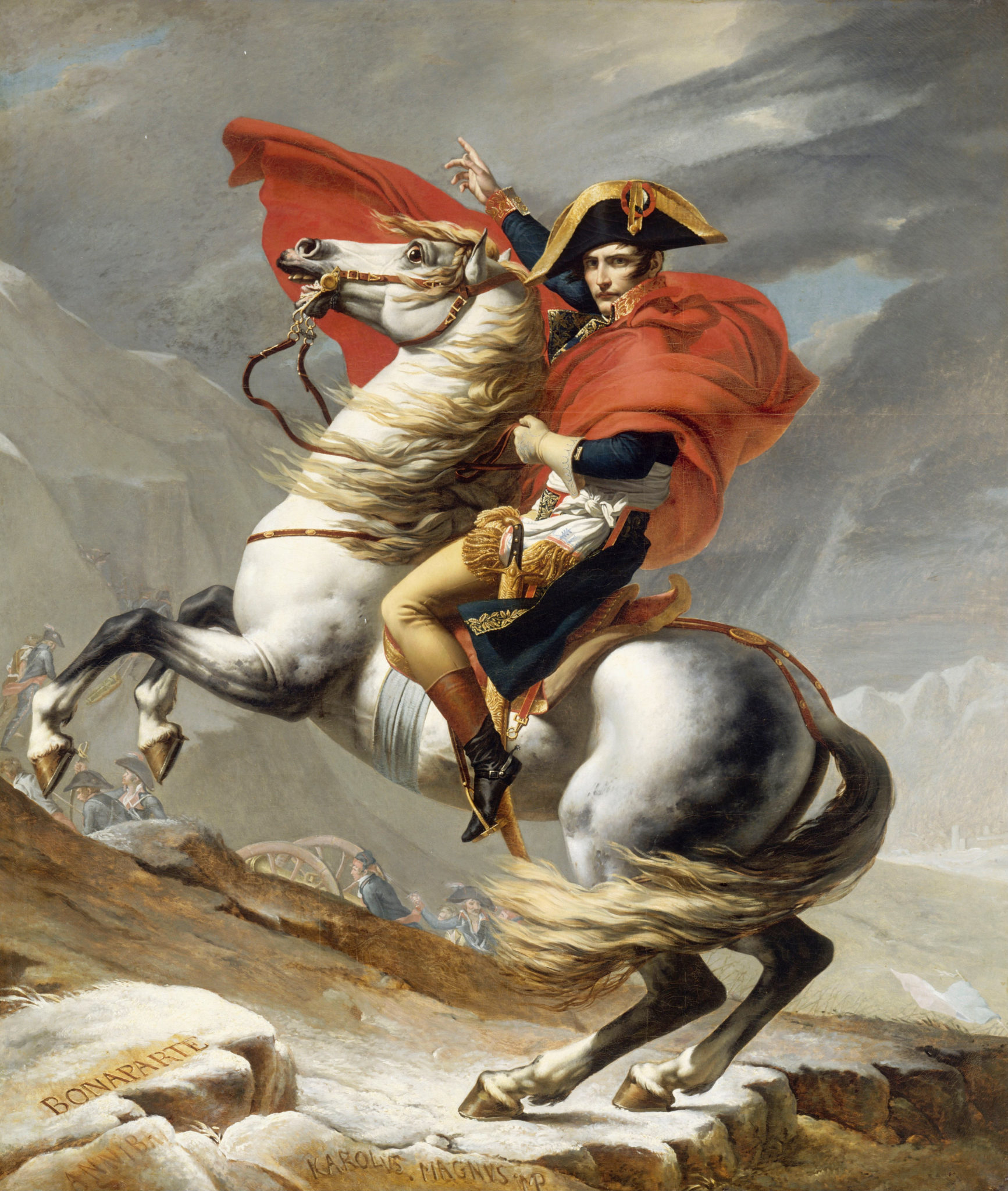 Marengo was the favourite mount of Napoleon, a white stallion known for his courage and toughness. When he was depicted in the above painting by Jacques Louis David, Marengo became a symbol of the French revolution, shaping Napoleon’s public image across Europe.

However idealised the painting may be, perhaps the most unrealistic element is Napoleon himself. Napoleon was a notoriously terrible rider, having grown up without horses and never having completed his military riding training. One account describes him riding ‘like a butcher… his body rolling backwards and forwards and sideways, according to the speed of his horse’. He held his reins bunched up in one hand, pointed his toes down, and hunched forward over his mount. Yet he was fearless, charging over any terrain, riding up to fifty miles in a day, and always remounting after a fall.

Napoleon had a stable of 80 horses for his personal use as well as many carriage horses. He can also be credited with re-opening many of the studs that were closed during the revolution and establishing numerous stallion centres and riding schools. Additionally, he recognised that horses whose tails were docked got irritated at being unable to swish away flies, and would not allow horses with docked tails to be purchased for himself or his cavalry.

While most cavalrymen rode Thoroughbreds, Napoleon liked Arabians and Barbs, which were short enough for him to mount unassisted, as well as being hardy, fast and brave. He also preferred stallions, so Marengo, a 14.1 hand high Arabian stallion, was ideal. The story goes that Napoleon bought him as a six-year-old during the Egyptian campaign of 1799, probably from the well-known El Naseri Stud. Marengo carried Napoleon through a multitude of campaigns and battles and was wounded at least eight times. Upon examination later in life, a bullet was found lodged in his tail, and five long scars marked his body.

At the Battle of Waterloo, Napoleon fled the scene in a cart, leaving Marengo to be captured by William Petre. Marengo was brought to England, where he was paraded before the crowds and sold to Lieutenant-Colonel Angerstein of the Grenadier Guards. He stood at stud at age 27, but was unsuccessful, and lived out his days as a star attraction at various parades and exhibitions. Amazingly, he lived to the ripe old age of 38! After his death in 1831, his skeleton was preserved, and it can still be seen today at the National Army Museum in London.