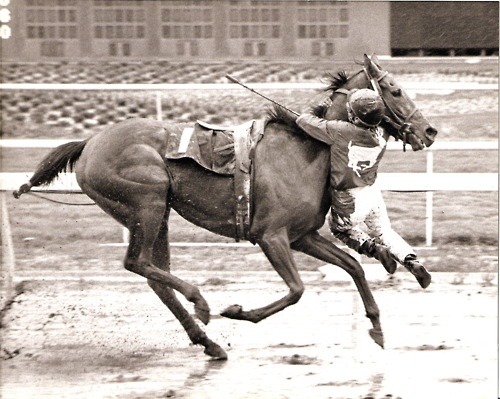 At California’s Golden Gate Fields in February 1989, when jockey Nate Hubbard was just a 19 year old apprentice, his race aboard a filly called Sweetwater Oak took an unexpected turn just several lengths from the finish line.

As the field galloped down the home stretch, Sweetwater Oak came flying up on the outside of the leader, Current Lady. At the sixteenth pole, the two horses’ hooves clipped in passing and Sweetwater Oak stumbled badly, sending Nate Hubbard flying out of the saddle in the process. Somehow, Hubbard managed to grab hold of the filly’s mane and hang onto her neck until they crossed the finish line!

‘I just tried to hang on so I wouldn’t get run over,’ he said. ‘I saw those horses behind me, and I wasn’t going to let go for nothing.’

After crossing the finish line, another jockey put his horse in Sweetwater Oak’s path, stopping the filly and allowing Hubbard to safely release his hold. Because Hubbard’s feet never touched the ground and Sweetwater Oak carried her allotted weight for the whole race, the stewards ruled that they had legally achieved second place, despite Hubbard’s unorthodox position.

How’s that for a wild ride, globetrotters!