Most of us know the story of Seabiscuit, the underdog who went on to become a legendary racehorse. No? Then read this first!

One very important character in Seabiscuit’s life was Pumpkin, a palomino gelding who was introduced to Seabiscuit by his trainer, Tom Smith. That’s Pumpkin in the video above, rubbing noses with Seabiscuit (click play and you’ll see him). Pumpkin was an experienced lead pony, having calmed the nerves of countless racehorses on and off the track. He had also been a Montana cow pony in a previous life, so he’d seen a thing or two (in the photo below, you can see the scar on his rump where he was once gored by a bull!). 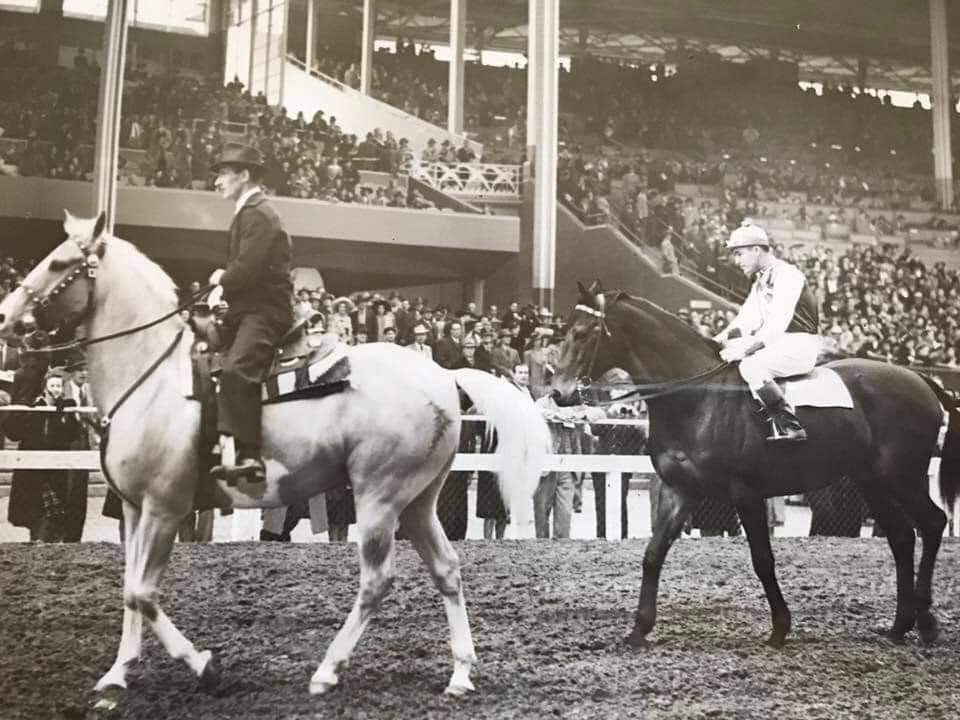 When Charles and Marcella Howard first bought Seabiscuit and entrusted him to trainer Tom Smith, Seabiscuit spent almost all of his time in the stall pacing, nervous and cantankerous. He lunged with bared teeth at anyone passing his stall and ate so little that he was 200 pounds (90 kilograms) underweight. In hopes of calming him, Tom Smith sought out a companion animal.

The first unfortunate stallmate was a goat, who Seabiscuit promptly picked up with his teeth and tossed over the stable door! So Smith brought in Pumpkin, who was big enough to stand up for himself. The two horses got on so well that Smith promptly knocked out the wall between two stables so they could live together.

From that day on, Pumpkin and Seabiscuit went almost everywhere together, stabled either together or in neighbouring stalls. Pumpkin was a steady shoulder to lean on – or knock into – when the trackside commotion got a touch too rowdy, and a friend to return to after sailing past the finish line. It’s very possible that without Pumpkin, Seabiscuit would never have become the legend we remember today.

Image credits: main image via Horse Racing Legends on Facebook, preview image by Janet Mui on Pinterest. Original copyrights unknown – please contact us at info@globetrotting.com.au if you have any knowledge.