One of the greatest Thoroughbred racing legends of all time, Seabiscuit had an inauspicious start to his racing career, but became an unlikely champion and a symbol of hope to many during the Great Depression. 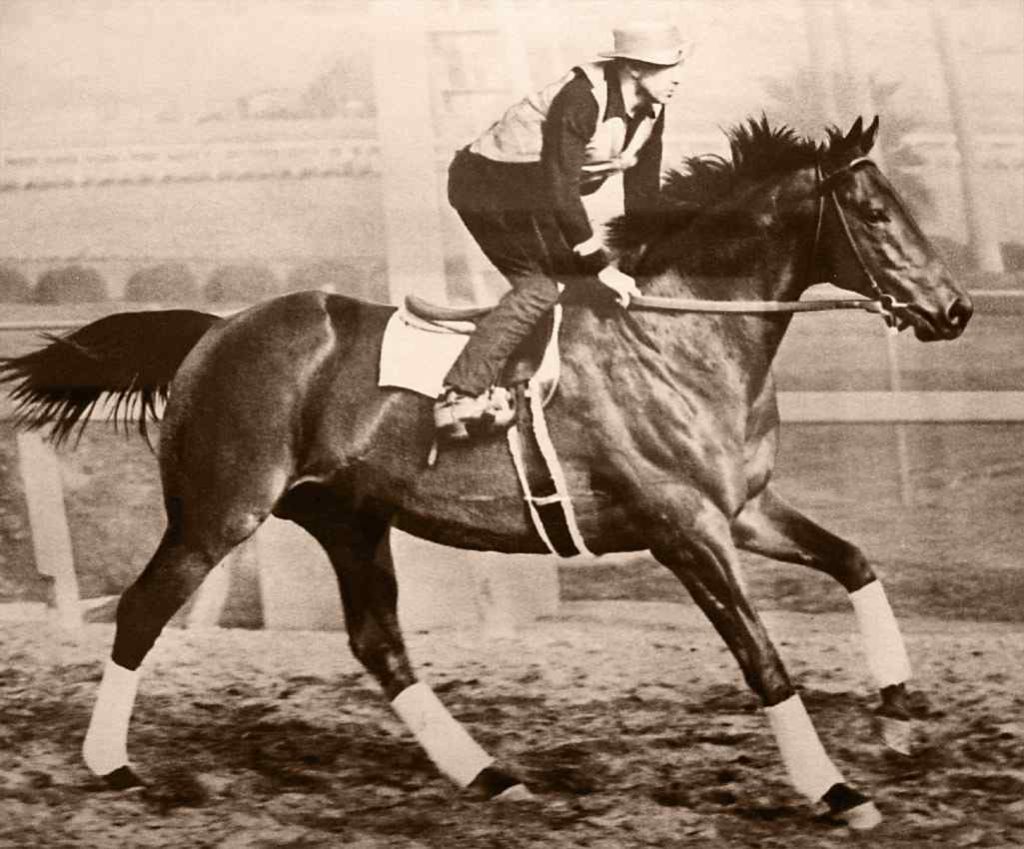 At age two, Seabiscuit had raced a record 35 times, but had only five wins to his name. It wasn’t until he was bought by Charles and Marcella Howard, whose trainer was Tom Smith, an old western cowboy who knew how to communicate with horses like no other, that Seabiscuit began to show his true potential.

Tom gave Seabiscuit the chance to be a young colt without all the pressure, plus some much needed R&R. He took his time with Seabiscuit, first addressing his constant tension and nervousness by giving him a friend: Pumpkin, a palomino lead horse who shared a stall with Seabiscuit almost from the day they met. Smith then addressed the horse’s sore and underweight body with a handmade liniment on his legs, kept in place with thick bandages, and very high quality oats and timothy hay. Finally, Smith changed Seabiscuit’s rebellious attitude towards racing by taking him to the track and instructing his rider not to command or direct the horse at all. With nothing to rebel or resist against, Seabiscuit had to make his own decisions, and very quickly caught on to the fact that his rider was no longer his opponent, but his ally. That was the last time he ever fought his rider!

When Seabiscuit’s nerves were finally settled, he had reached a good weight and had learned to love running again, Tom decided to give racing another try. He chose Johnny ‘Red’ Pollard to be Seabiscuit’s new jockey – an ex-boxer who was blind in one eye and towered over most of the other jockeys. The partnership was subject to ridicule at first, but Pollard formed a great bond with Seabiscuit and the once neurotic, skittish horse became easygoing and sociable.

1937 was the start of Seabiscuit’s four-year-old season, and he won his first race of the year. He then went on to run in the prestigious Santa Anita Handicap against 17 other competitors. With one furlong to go in the race he was out in front and it looked like he was going to win with ease. But neither horse nor jockey noticed Rosemont come up the side, gaining on them with every stride. A photo finish was required, but Seabiscuit had lost by a nose. Despite this, the horse had started to become a celebrity.

Seabiscuit’s five-year-old season didn’t get off to quite the same start, as just weeks before he was due to run in the Santa Anita Derby for the second time, he was without a jockey. Pollard had been injured in a spill and wasn’t able to ride for quite some time. He recommended his good friend, George Woolf, to take over the riding duties. Nicknamed ‘The Iceman’, he was known to time his horses’ closing stretch drives so precisely that he won on a regular basis.

Throughout 1937 and 1938, the media speculated about a match race between Seabiscuit and the seemingly invincible War Admiral (sired by Man O’War, Seabiscuit’s grandsire). But it wasn’t until the Pimlico Special held on November 1, 1938, that the two legends would meet. In what is perhaps the most famous race in thoroughbred racing history, Seabiscuit managed to defeat War Admiral by four lengths. That same year he claimed the Horse of the Year title.

At the start of his six-year-old season, Seabiscuit set out for a third attempt at claiming the Santa Anita Derby. But as he made his closing move in a prep race, he injured his tendon and his racing days looked to be over for good. He was turned out in the fields to recover for nine months. At the same time, his original jockey Pollard was hobbling around on crutches, slowly recovering himself. Once Seabiscuit was sound again, Pollard began riding him to build up his own strength, and decided to try for a comeback in 1940.

At seven years of age, Seabiscuit was more than twice the age of some of his rivals, but Howard, Smith and Pollard believed him to be capable, even though no horse had ever returned to top form after such an injury and long time off. They set out to chase the Santa Anita Handicap, and received a standing ovation from a crowd of 70,000 as they stepped out onto the track. Seabiscuit finally claimed the title, running the second fastest mile and a quarter in American racing history. That’s him winning below. 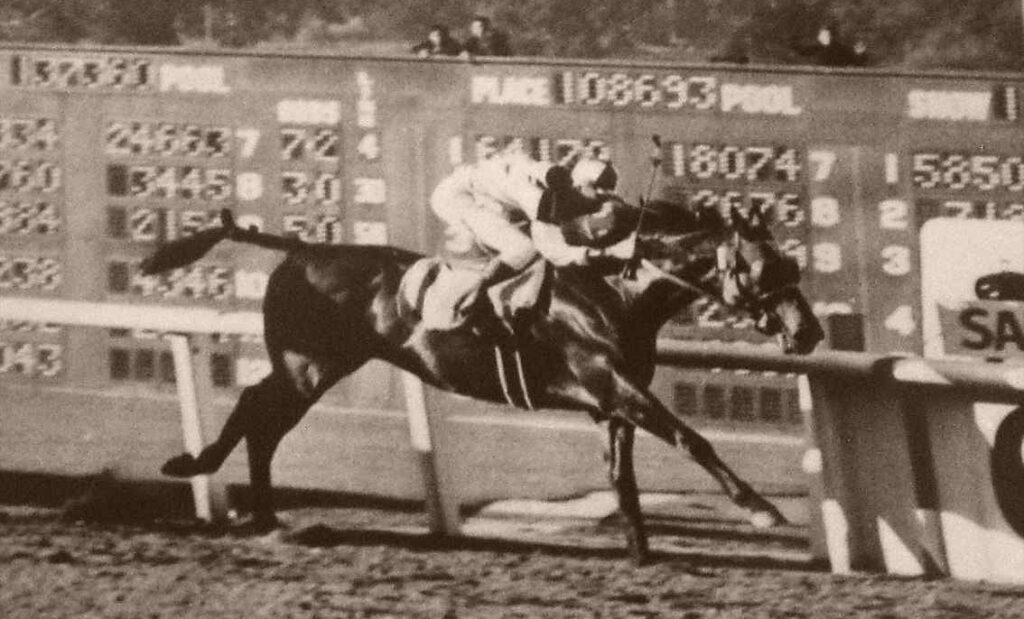 In six years of racing, Seabiscuit competed 89 times, winning 33 of these races, finishing on the board 61 times, setting 16 track records, and equaling another. Having won $437,730 in prize money, he was worth his weight in gold to the Howards, who had purchased him for just $7500. After winning the Santa Anita Derby, it was time to finally retire. He went home to live out his days on Ridgewood Ranch, and in the years before his death, over 50,000 visitors came to the ranch to lay eyes on the champion. In 1947 he suffered a heart attack at only 14 years of age. He was buried on a secret site on the ranch, with only an oak sapling to mark its location.

Seabiscuit has been the subject of numerous books and films, including the 2003 film aptly titled Seabiscuit that was nominated for the Academy Award for Best Picture.

So there you have it, globetrotters, the story of one of the most famous racehorses in history. I love the fact that Seabiscuit and his jockey, Pollard, both suffered major setbacks along the way but always fought back to overcome them. A true fairytale story if ever there was one.

Who’s your favourite racehorse of all time, and why do you love them? Please feel free to share in the comments below!