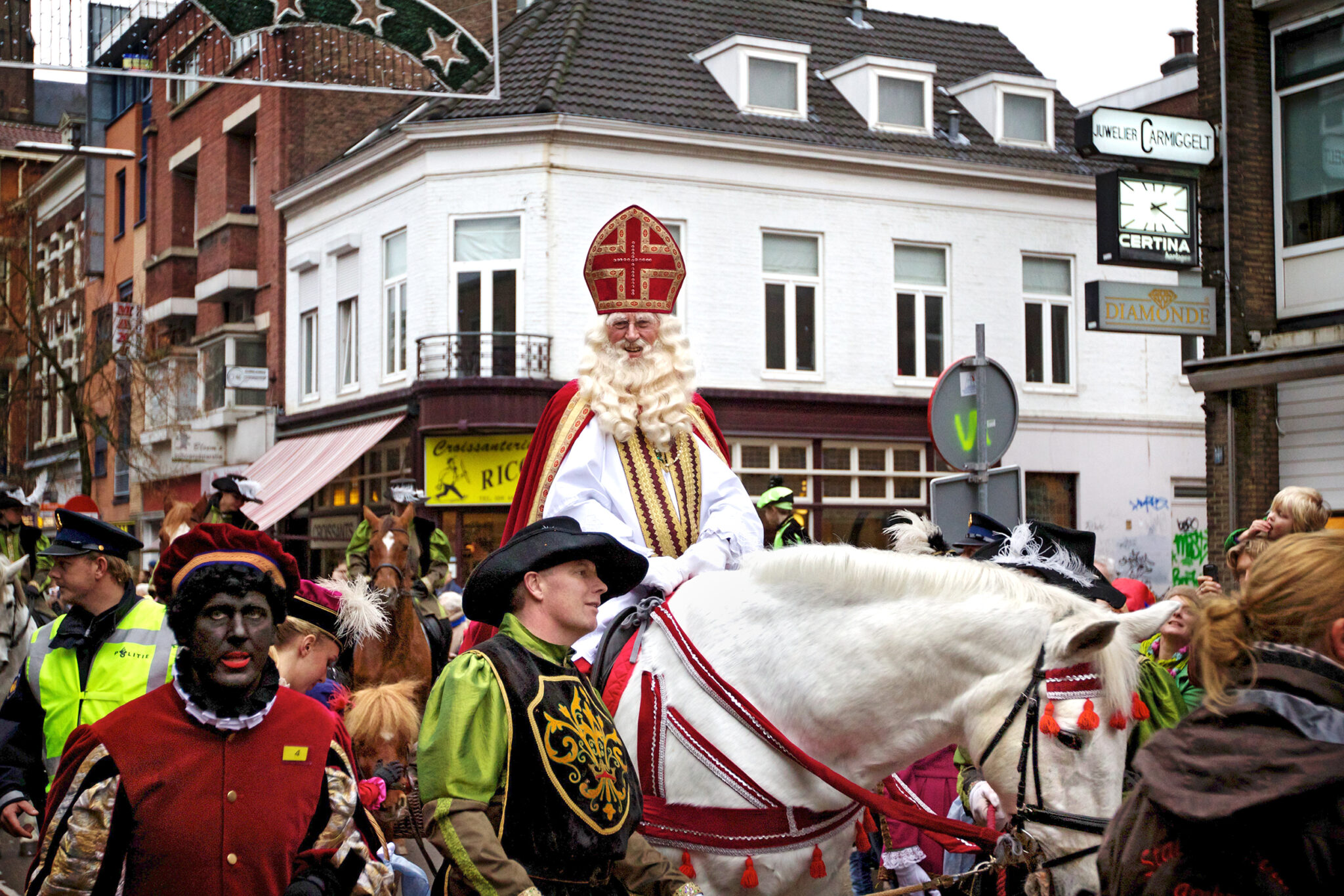 Jolly old Santa Claus isn’t the only version of Saint Nicholas to have survived into the 21st century. Nor, one might very well argue, is he the best version!

What could be better than Santa Claus, I hear you ask? The answer is simple: Santa Claus riding a horse.

I have nothing against a team of reindeer pulling a sleigh full of presents around the world at Christmas time, but as a horse person I simply can’t resist the idea of a white horse collecting all the carrots and sugar cubes left out beside millions of Christmas trees. And it seems the horse came first: Sinterklaas was the primary influence that led to today’s plump, white-haired, red-coated Santa Claus.

Based directly on Saint Nicholas, the patron saint of children, Sinterklaas is honoured in the Netherlands, Belgium, Luxembourg and northern France. He usually arrives on a boat from Spain in mid-November, parading through the streets on his white horse (called ‘Amerigo’ in the Netherlands and, weirdly, named after the weather in Belgium). He is also accompanied by helpers called Zwarte Piet (‘Black Pete’), who have black faces and colourful, flamboyant outfits. (Unfortunately, there’s racism endemic in Zwarte Pete, especially when these helpers are played by white people wearing blackface. We don’t like this part of the Sinterklaas tradition. Interestingly, some old photos from Sinterklaas parades in the 20th century show these helpers being white people without blackface or any reference to ‘blackness’. Hopefully soon all Sinterklaas parades will be similar!)

Sinterklaas gets his own feast on Saint Nicholas Day on the 6th of December, at which point he rides his horse across the sky, delivering gifts to the children whose names are in his ‘good book’. The children leave one of their shoes out, filling it with a poem or wish list for Sinterklaas (maybe even a coffee if he’s lucky), a beer for Zwarte Piet and a carrot or some hay and water for the horse. In return, Sinterklaas pops a little gift and a personalised, teasing poem into the shoe.

It’s possible that Sinterklaas developed from the Norse god, Odin, who rode a white horse called Sleipnir through the air accompanied by two black ravens. The feast of Saint Nicholas was first celebrated in the Middle Ages, and Sinterklaas and his horse have been feasting and gift-giving in winter – and presumably living it up in Spain for the rest of the year – ever since.

What are your thoughts, globetrotters? Anyone ready to make the Santa-Sinter switch? Or do you have any other horse-related festive traditions? Let us know in the comments!