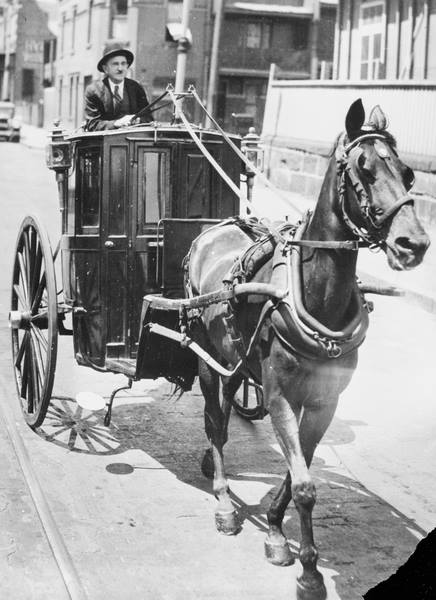 From the 1870s to the 1920s, the hansom cab was one of the most popular means of transport on the bustling streets of Sydney. Hansom cabs were pulled by only one horse, with two to three passengers seated inside the cab and the driver seated behind, looking over the roof. Their speed, affordability and agility when compared to larger cabs pulled by two or more horses gave hansom cabs a competitive edge. They were especially popular with courting couples due to the privacy they afforded, but this gave the cabs a rather seedy reputation!

The photo above shows Mr J. O’Connor driving his horse, Darkwing, who is pulling Sydney’s last hansom cab. Motor cars, trams and telephones had collectively replaced horse-drawn city transport by the time Mr O’Connor sold his cab to the Museum of Applied Arts & Sciences for £6 in 1937. However, Mr O’Connor and Darkwing were still a working team almost until the day they delivered the cab to the Museum, transporting passengers across town come rain, hail or shine.