I have a love affair with Kenya. I’ve been travelling to the country, the land of the happy, shiny people every year for seven years now. Unfortunately this year, I can’t participate on our annual pilgrimage to the Masai Mara with my keen-as-mustard globetrotting guests to migrate on horseback alongside thousands upon thousands of zebra and wildebeest that inundate the reserve every year. Instead, my father and guide, Angus Johns, will be taking up the reins much to his delight as he also holds Kenya close to his heart. It was in the honeycomb, acacia tree dotted plains of the Mara game reserve that I fell in love with the Globetrotting way of life, exploring faraway cultures and landscapes from the back of a horse. It was Kenya that gave me my first gasp of this life and like the hook thorns on the ‘wait a little’ trees has had me in its clasp ever since.

So when I heard that the Kenyan film The First Grader was playing at my local cinema I was delighted to get a Kenyan injection. The First Grader is a true story of an 84 year-old Kenyan villager and ex Mau Mau freedom fighter who fights with quiet persistence for his right to attend school for the first time and get the education he could never afford. 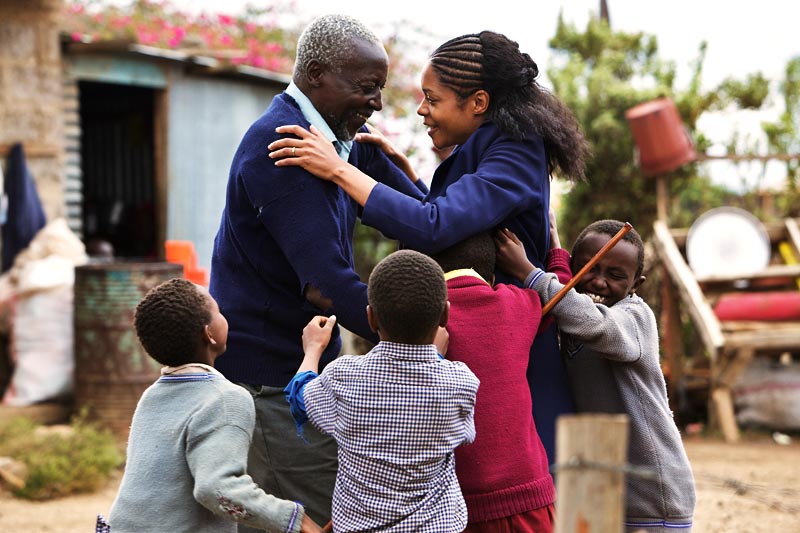 His objective is to learn to read so that he can decipher a tattered, yellowed letter that he’s been holding onto since independence was declared. Eventually the head teacher Jane Obinchu (Naomie Harris) allows Maruge, the Mau Mau veteran, to attend school in his dusty uniform, perching him at the front of the class due to his poor hearing and sight. He looks deftly out of place with his grey whiskered beard and long, stick insect legs amongst the watoto (children).

Full of vitality and humour, the film explores the remarkable relationships Maruge builds with his classmates some eighty years his junior. Through Maruge’s journey, we are taken back to the shocking  story of British colonial rule 50 years earlier when Maruge fought for the freedom of his country, eventually ending up in a British detention camp.

For anyone planning a trip to Kenya or who has visited the East-African country, you’ll fall in love with the determination of Maruge in his fight for freedom and education, while learning about the dark history before Independence was declared.

Watch the trailer here. It’s available to rent on iTunes.