Yeehaw! The Wild West era of history was filled with daring feats of horsemanship and the Pony Express was known for this! What on earth am I talking about I hear you ask? Well, the Pony Express was a mail service relay team that ran across a 2,000 mile route (!!!) through cities such as St. Joseph, Missouri all the way to Sacramento, California. William H. Russell, Alexander Major and William B Waddell founded the service on April 3rd, 1860. Although they only lasted 19 months, the Pony Express inspired a whole new level of rapid mail delivery for the future.

The system was so fast that William Russell, one of the biggest investors in the Pony Express, used it to deliver the news of Lincoln’s election in 1860 as a way of promoting the delivery system. On November 7, a Pony Express rider left Fort Kearny in Nebraska Territory with the election results and relayed the message with other riders over snow-covered trails into Fort Churchill, Nevada. It took seven days and 17 hours for California’s newspapers to receive the message of the election! I guess you could say it was like sending an email in those times! 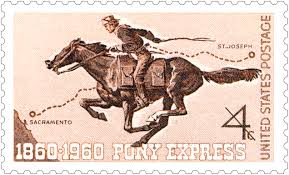 So how did it work? The Pony Express had 80 riders travelling east to west along various points of the route at any given time. These riders used around 400 horses, selected for their speed and endurance levels, to deliver the mail. On the eastern end of the system they selected horses mostly from the US cavalry, including Morgans and Thoroughbreds, but on the western side they picked over 200 ‘Californian horses’ (native ponies like Mustangs). These horses rode around 15 miles (approximately 24km!) each time they were chosen and they were relieved at the next checkpoint with a fresh horse. The riders would usually change their horse up to eight to ten times as they rode, usually at a fast trot, canter or sometimes a gallop when being chased by Native Americans.

What a concept! Having riders with letters on horseback racing from California to Missouri and vice versa to deliver rapid fast mail! Wouldn’t it have been fascinating to witness? How times have changed…

Reference: Wikipedia and The History Channel