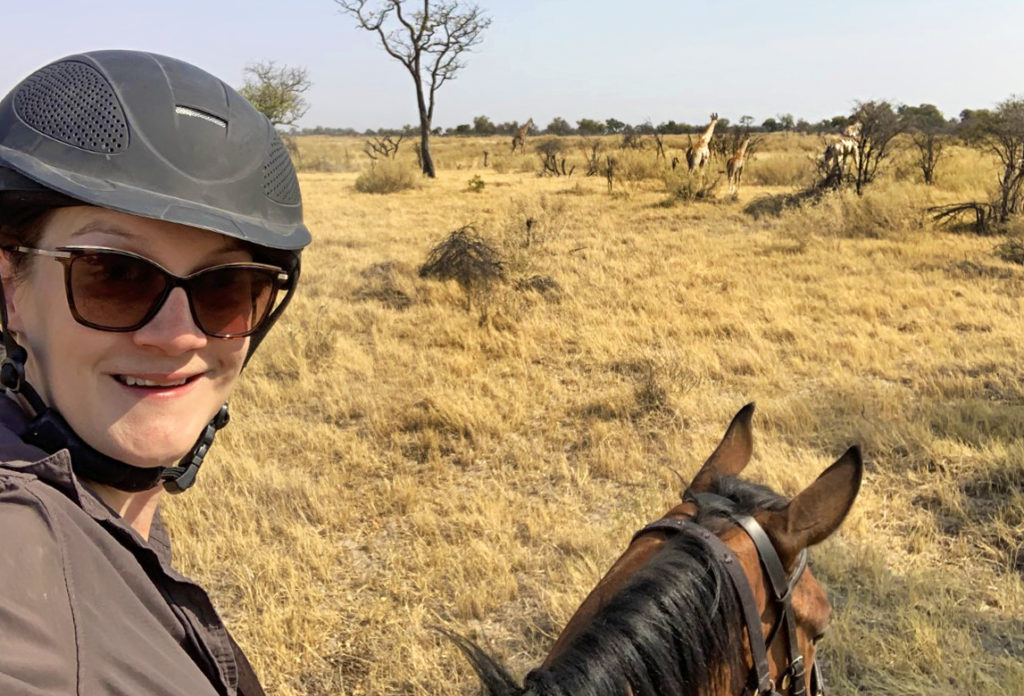 Globetrotters, allow us to introduce Erin Harriott, an Aussie globetrotter with a serious appetite for adventure! Whether she’s flying over a cross country course, galloping alongside giraffes in Botswana or summiting the Victorian Alps, Erin clearly believes life is best lived in the saddle.

How have horses influenced or changed your life?
It wasn’t until I had to have three months off riding due to an injury in 2016 that I appreciated how many hours I actually dedicate to horses! The biggest influence horses have had on my life is my impeccable time management – somewhere along the way in my involvement with horses, I mastered the art of juggling training competition horses, maintaining a career, having a social life and getting sleep.

What is your earliest memory of horses?
I was eight and having my first riding lesson at the local school on a chestnut named Shamoo, but I quickly fell in love with the spotted appy named Leopold, who spent the next four years teaching me so much about horses.

What was your childhood pony called?
Jai (AKA Triple Threat) was a 16.2 hand high dappled grey Thoroughbred bought for me by Mum and Dad when I turned 13. Jai was everything you could hope for in a first horse. He took me from beginner to Pony Club A grade eventing, earning us a wall of ribbons along the way. One of my favourite and earliest memories with Jai was the Harden Pony Club One Day Event: he led from start to finish, and there began a lifelong passion for eventing. After more retirements than John Farnham and multiple comeback seasons for many of my students to learn the eventing ropes, Jai was well loved and respected in the local eventing community. We lost Jai to cancer in April 2020 but he’s still joyfully remembered in numerous stories at the stables by everyone who had the pleasure of knowing the gentle giant.

What does riding or being with horses mean to you?
All rides are good, some are just better than others… Riding and being with horses, I have had the highest of highs and the lowest of lows, but being in a partnership with a horse is something very special and unique.

What have horses taught you the most?
The all-important lesson of ‘just go with it’! If you think having Plan A and B will be sufficient with horses, you’ll quickly learn to have Plan A through to Z. What horses have taught me is to be prepared to find yourself in situations you couldn’t have dreamed of (both good and bad).

What was your first Globetrotting ride?
The Glenorchy Back Country Ride in New Zealand with my good friend Stacey. 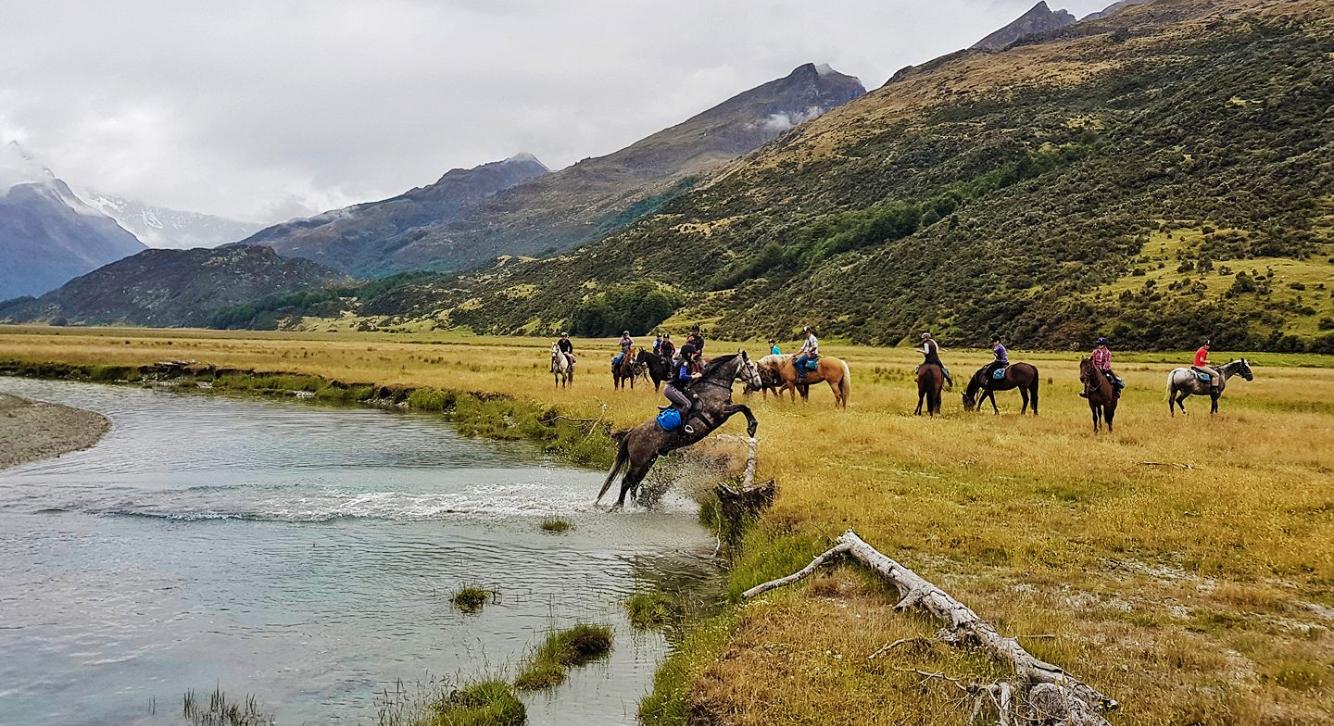 What made you take the plunge and sign up for a Globetrotting holiday?
Stacey called me and told me about the ride, then two hours later we had saddle seats and plane tickets to New Zealand, and the rest is history.

Which Globetrotting rides have you since completed/planned/dreamed about?
After riding in Glenorchy, I rode in the Okavango Delta in Botswana with my partner Tim – I don’t have a bucket list, but I remember realising that a horseback safari was something I had to do in my lifetime. The fact that I got to do it with Tim was even more incredible, as he had never ridden before we met, and in 12 months he went from being a total beginner to being able to gallop out of trouble – which we had to do on more than one occasion! {check out Erin’s safari journal here.}
After Botswana, Tim and I had planned to do the Cherry Blossom Ride in Japan* in April 2020 (but for obvious reasons, we never made it). So Japan 2020 became the Craig’s Hut & High Country Ride in December 2020. Every globetrotter must do the Victorian High Country! It superseded all my expectations and was some of the best riding I have ever done.
As for future Globetrotting rides, I’m thinking of The Kimberley Ride in Australia, the Maasai Mara safari in Kenya or the Kilimanjaro Elephant Ride in Tanzania, the Bordeaux Wine Trail in France and the British Columbia ride in Canada.

*Editor’s note: sadly, our holiday in Japan is no longer offered. We will be looking for a new Japanese ride as soon as the world opens up! 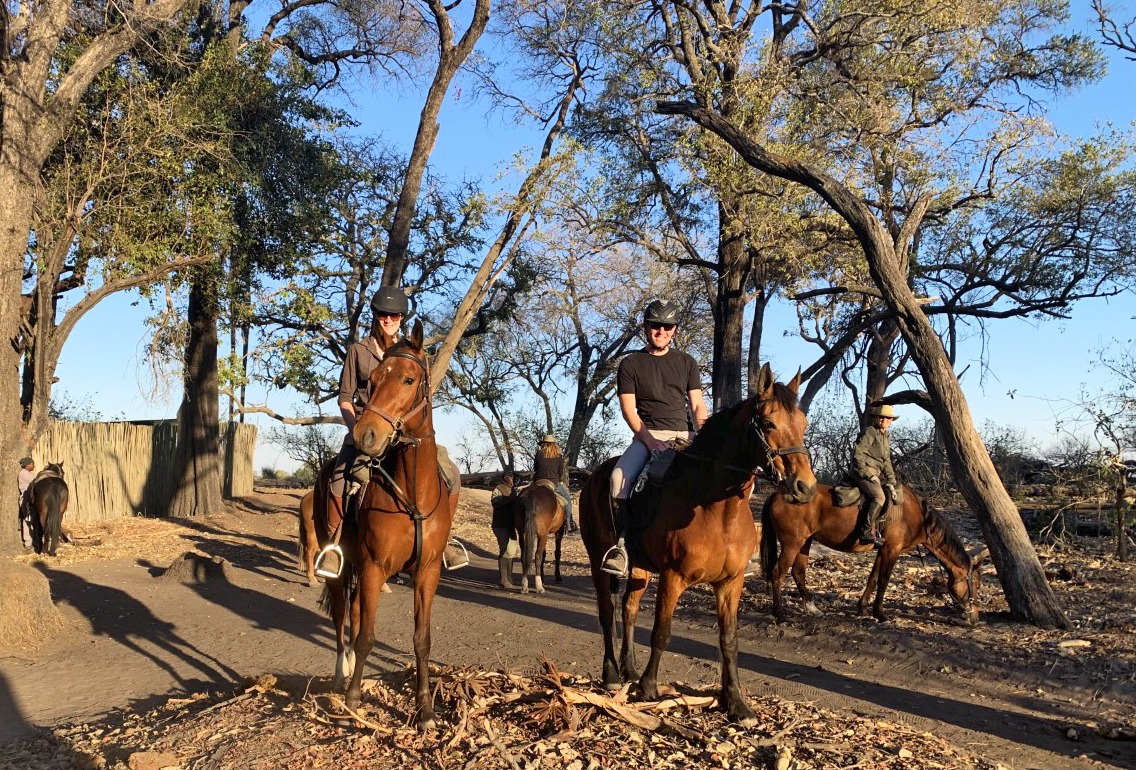 Why choose this type of travel? As in exploring new places from the back of a horse?
Mostly because there’s a level of fun to be had on horseback that you don’t have on your own two feet. But also on the African rides, the wildlife behave quite differently compared to when you view them from a vehicle. We galloped with giraffes and let our horses drink from the same watering hole as elephants – why would anyone pick a car over a horse?!

What is your most memorable Globetrotting moment?
There are so many, and with most of them you had to be there yourself, but if I have to pick, I can’t go past galloping with giraffe in Botswana and standing on the top of ‘Picture Point’ in the Victorian High Country {pictured below}. 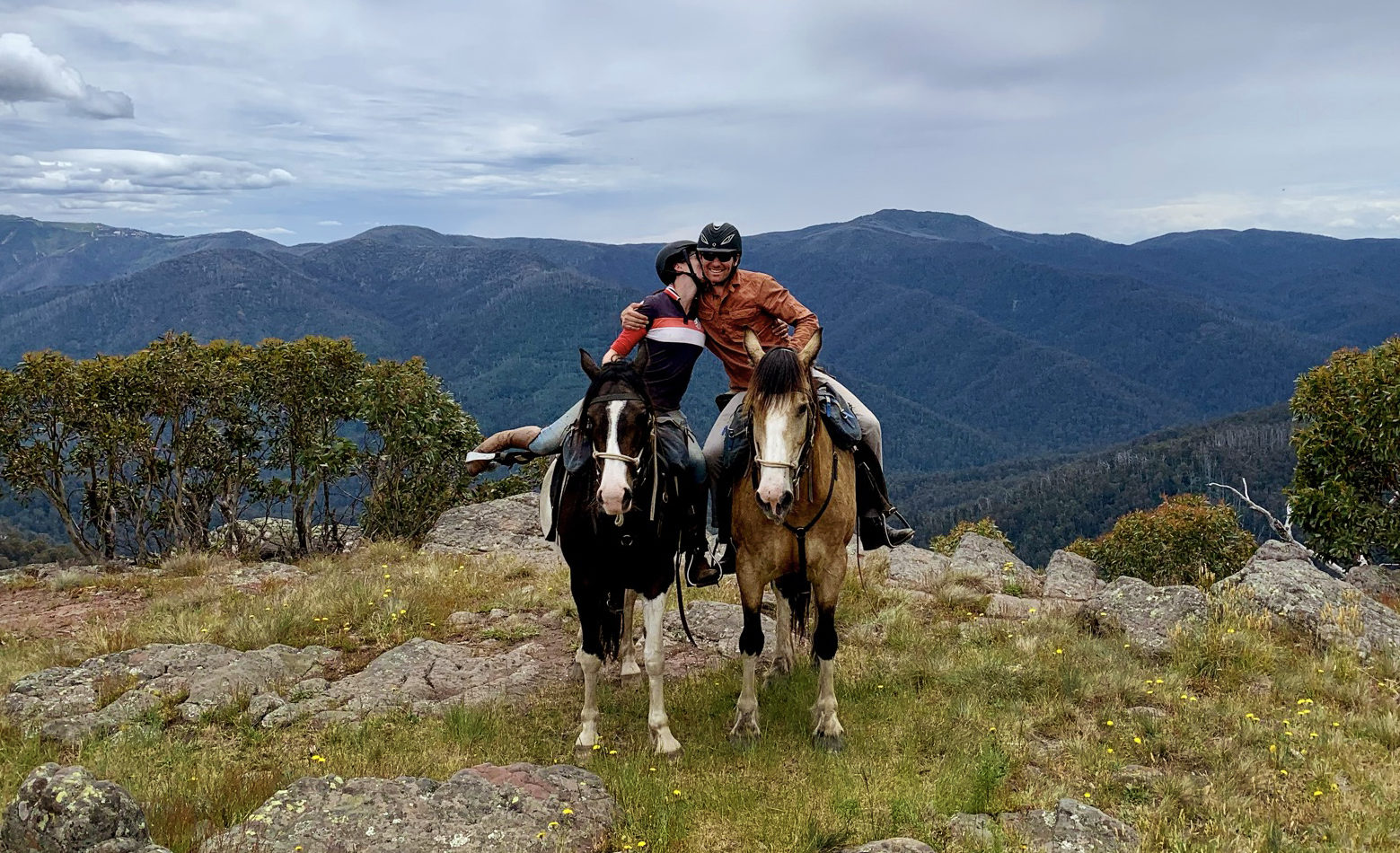 Who is your favourite trail horse of all time and why?
Mouse from the Craig’s Hut & High Country Ride. She was such a lovely little mare with an adorable personality.
For Tim, it would be his little bay mare in Africa, Daenerys – they had quite the bond after five days and on the final morning she broke from the herd to come give Tim one last cuddle. She has been a hard act for any trail horse to follow and is still the standard by which Tim rates every horse he rides now. If I ever find one he says is better than Daenerys, I’ll buy it on the spot!

A tip that every globetrotter should know before going on a ride…
Take a journal and write about your day – the big things as well as the little things. So much happens and when it’s all said and done, having that journal is a beautiful way to recall your trip when you may have otherwise long forgotten the finer details.
The trail companies are all exceptional and have their operations down to an art, but you’re working with horses, and sometimes in remote environments, so my tip would be to expect the unexpected and embrace what happens. Some of the coolest things and funniest memories I have of globetrotting have been thanks to unseasonal downpours, scenic detours (getting ‘lost’) en route to camp, having minor tack/wardrobe malfunctions… the list goes on.

Finish this sentence: Don’t leave home without…
Reading your packing list and trip information from Globetrotting. Having done rides in various climates and conditions, I can tell you the packing list is tailored to each ride and will tell you everything you need to know.