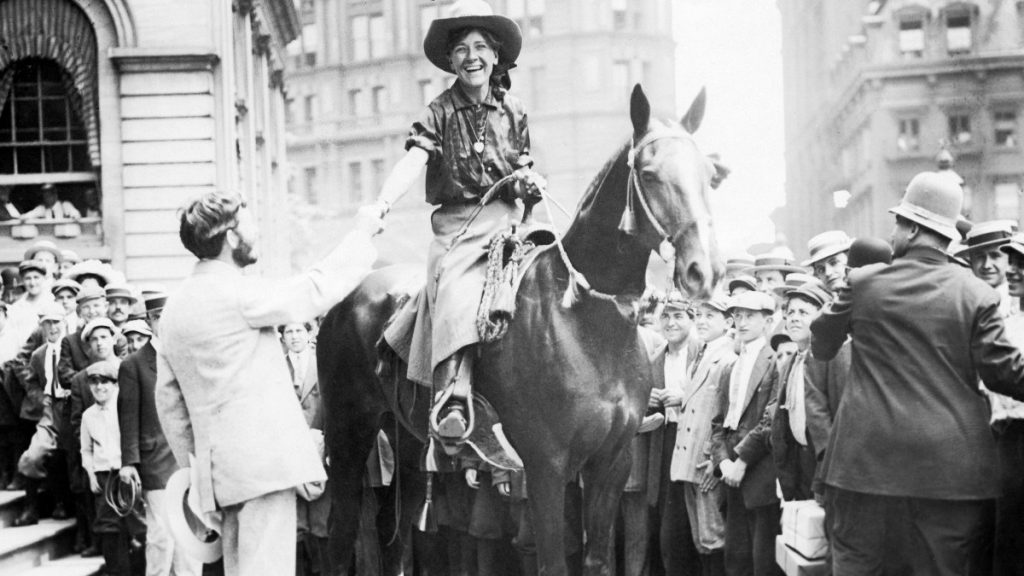 Nan Jeanne Aspinwall Gable Lambell, or Two-Gun Nan, was the first woman to ride a horse across America alone. She rode from San Francisco to New York, covering 4,496 miles over 180 days, all in the name of a bet made with Buffalo Bill, whose Wild West show she performed in with her husband. Her trusty steed for the journey was a bay Thorougbred mare called Lady Ellen.

Victorian ideals of womanhood remained at the start of the 20th century, but a few heroines attempted to blaze new trails and Two-Gun Nan was one of them. She performed as a horsewoman, sharpshooter, stunt rider, roper, and as a beautiful oriental dancer known as Princess Omene. But even though she was one of the highest paid stars of Buffalo Bill’s Wild West Show, her most remarkable feat was entirely real, not staged, and much more difficult and dangerous.

Setting off in 1910 at 31 years of age, Two-Gun Nan became the first woman to ride from the west coast to the east coast of the US alone. She did it wearing pants and split skirts, riding astride the horse, not side saddle as was expected of women. At one point, she spent a week in hospital after she and Lady Ellen rolled down a mountainside; and while crossing the mountains of Nevada, she lost her sense of direction and spent several days searching in vain for a trail without food, water or shelter until Lady Ellen instinctively led her to safety. Nan later told a newspaper, ‘It was Lady Ellen that saved my life.’

When she arrived in New York, Two-Gun Nan became an instant legend. Carrying a letter for the Mayor of New York from the Mayor of San Francisco, she delivered it to the Mayor’s secretary outside City Hall surrounded by cheering of onlookers. Then, according to the Los Angeles Tribune, she and Lady Ellen rode into a twelve storey building, boarded the freight elevator and alighted at the top floor! Perhaps Nan needed to get a view of New York in order to really believe that she’d made it.

“Nan struggled mightily, not only against the elements, the geography, and the constant need to keep her horse healthy, but against the prejudices of the population as well. Thus it was a gruelling physical, mental and emotional challenge, laden with the realisation that if she failed there were those who would mock her, and all women, as being too weak to accomplish what men had been doing for generations. Yet she rode Lady Ellen into New York in terrific shape. This demonstrates that Nan devoted herself to the horse’s welfare, a fact that is reinforced by the knowledge that she shod the mare 14 times herself.”

Talk about the weight of the world on your shoulders, globetrotters, but full credit to Nan for completing her journey and looking after her horse so well along the way!

Image credits: feature image from the New York Times, July 9, 1911, via Diary of an OTTB; preview image via Equine Ink.