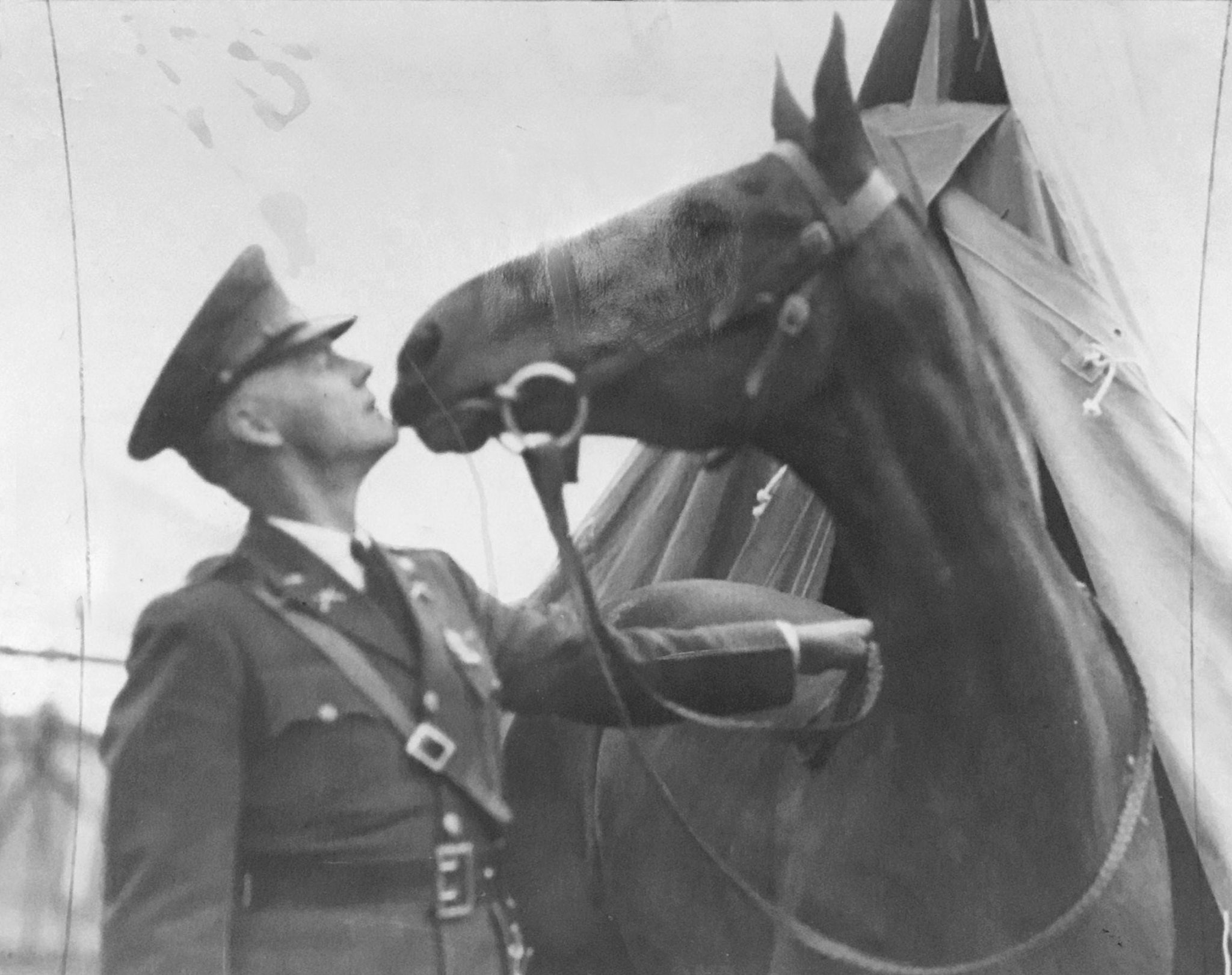 Whiskey was a chestnut gelding who was quite unremarkable to look at, but possessed truly remarkable intelligence and a great talent for jumping. He became the adored mascot of the U.S. Army station at Fort Snelling, Minnesota.

When he arrived at Fort Snelling as a ten-year-old in 1921, he was rebellious and wild. Those who handled him said Whiskey could ‘kick a hole in a battle-ship’. Luckily for Whiskey, another new arrival, Lieutenant William Reuben Hazelrigg, spotted a rough diamond. He chose the horse as his assigned mount and trained Whiskey himself, adding to his training regime many long hours of quiet conversation. Something passed between them and the pair were soon inseparable. 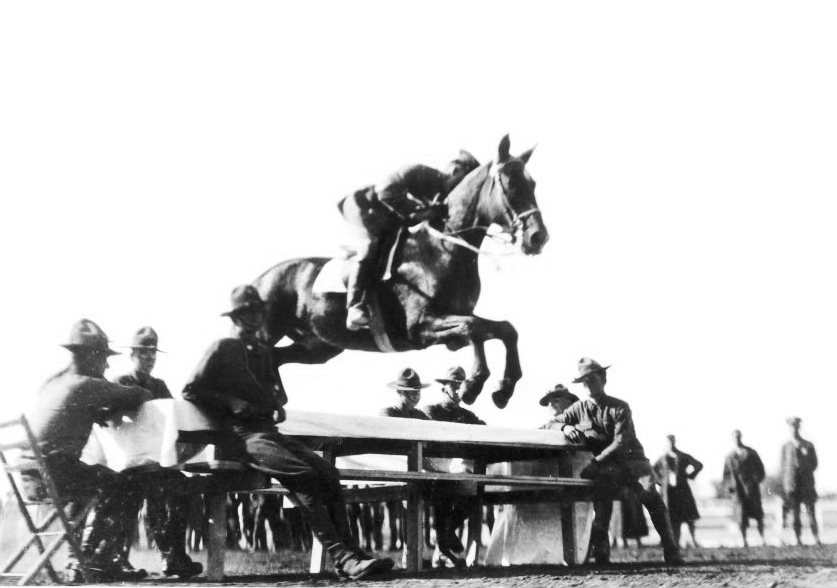 Not only did Whiskey excel at polo and jumping, he demonstrated an astounding ability to master tricks. Hazelrigg could have the horse lift his hat off his head and put it back again, select a handkerchief of a particular colour from a bunch, search for hidden treats, sit on his haunches, bow, lie down and play dead. It wasn’t long before Hazelrigg combined Whiskey’s talents and had him jumping over friends seated at picnic tables, mules hitched to supply wagons, human hurdles, Snelling the white mule, through rings of fire, and just about anything else he was pointed at.

Fort Snelling and the surrounding communities were hugely into horses, with many events held both at the fort and in town including shows, fairs, fox hunting and polo. Whiskey soon made a name for himself by playing in the polo matches or competing in the shows as well as providing the half-time entertainment. He was a great performer and seemed to revel in the applause and attention he received. At Fort Snelling, he became quite a pet, soliciting the cooks for sugar cubes, wandering about the grounds nibbling at the lawns, and escaping from his stall on a nightly basis. But when he had brought home so many trophies and accolades, how could his army mates resist those warm brown eyes? 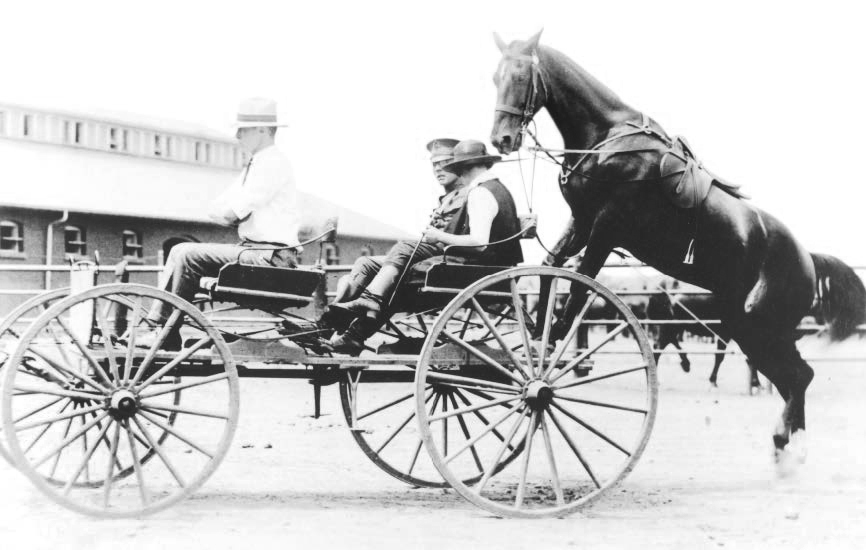 Whiskey frequently appeared in local newspapers and locals followed his story as closely as any celebrity. This was especially apparent in 1926, when Lieutenant Hazelrigg received orders to transfer to the Philippines for two years. Hazelrigg managed to raise the funds to buy Whiskey, and requested permission to either buy him or take him to the Philippines. Several local citizens implored a senior officer to use his influence to settle the matter, but it was to no avail. Hazelrigg was an infantry officer, not a cavalry officer, and could not take his horse to a new post.

Whiskey was noticeably depressed and didn’t come out of his shell until the following year, when the wife of an officer, Mrs O’Brien, arrived and began working with the horse. The local paper reported a rocky start, with Whiskey giving a lacklustre performance at the state fair show. But in the final class, which featured challenging and unusual obstacles, Whiskey finally seemed to remember himself and the pair won first place.

When Hazelrigg returned in 1928, the first thing he did was visit his old friend. Whiskey nuzzled him, then picked up and returned Hazelrigg’s riding crop like no time had passed at all. But Hazelrigg was only passing through, and another request to buy the horse was denied. Whiskey had several riders in the following years, and continued to wow the crowds at polo games and shows all around Minneapolis. Once in a blue moon, Hazelrigg would return, and the emotional reunion would be covered by every paper. 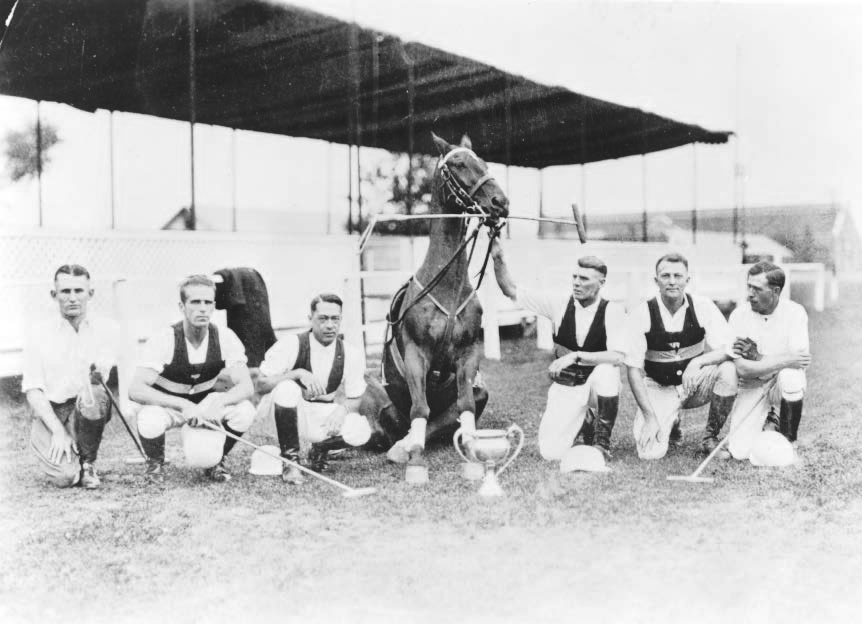 Whiskey was retired in 1934, and the news prompted renewed efforts to reunite him with his beloved Lieutenant. One impassioned resident even wrote to the president, Franklin D. Roosevelt! However, when the response came from the Secretary of War, it was final:

‘”Whiskey” is an Army horse… he belongs to a regiment and to an Army post whose officers and men are proud of his achievements and very much attached to him […] the officers and men at Fort Snelling will see that “Whiskey” enjoys a serene and comfortable old age, and I believe they are justly entitled to continued enjoyment of the pleasure which the presence and performance of this exceptional horse have brought to their regiment and their post.’

Whiskey was put out to pasture with his friends, the mules Snelling and Nat. He remained at the fort even after the Army became fully motorised and stopped providing his feed: a benefit event at which Whiskey performed his greatest tricks raised enough money to keep him well-fed for the rest of his days.

Hazelrigg paid Whiskey one last visit in 1943. It was reported that the ageing horse caught sight of his old friend and walked a few steps, then charged across the field to meet him. Hazelrigg ‘chatted with him in a language only he and Whiskey know’. Whiskey died peacefully the following year, the last horse in the Fort Snelling stables. He was given full military honours and buried at the edge of his pasture. To this day, despite two relocations, a headstone bearing a sculpted likeness of Whiskey’s head and the words ‘Whiskey – a great horse, a stout heart’, still overlooks Fort Snelling and the Minnesota River. It’s not uncommon to see fresh flowers placed on the grave even now, more than seventy years since Whiskey’s passing. As the papers put it, ‘any man ever stationed at Fort Snelling knew Whiskey’s story’.