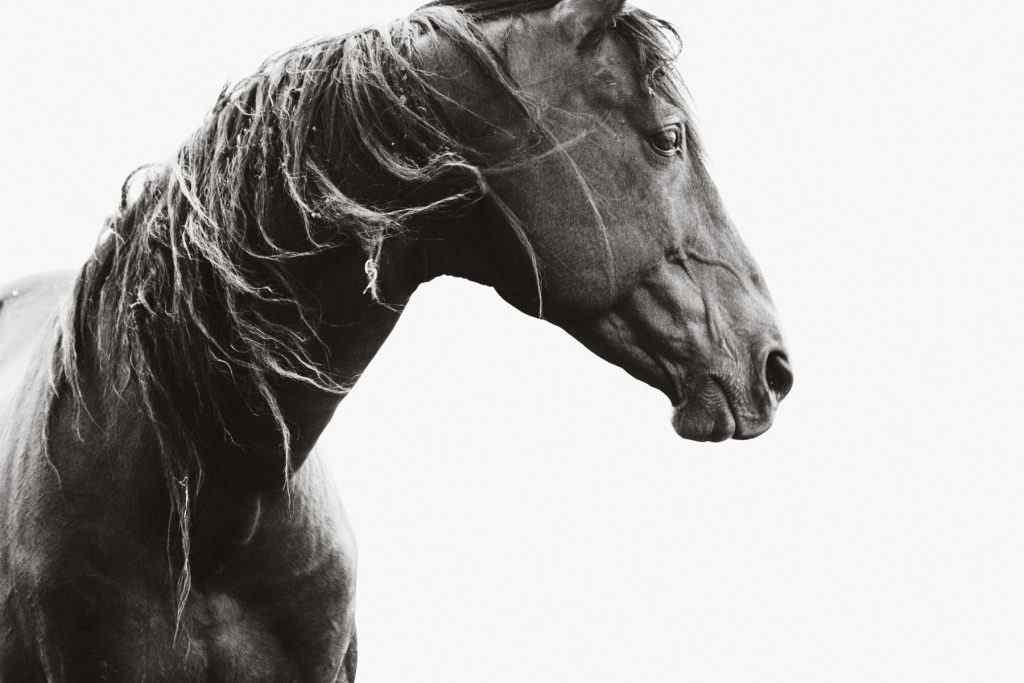 Nick Leary is an internationally acclaimed fine art photographer who possesses the innate ability to find beauty in a multitude of places. His latest collection – Wild Brumbies of Australia – stems from his own deep seeded passion for his home country Australia, his adventurous nature and his love of wildlife and harsh terrains. Read his story below. 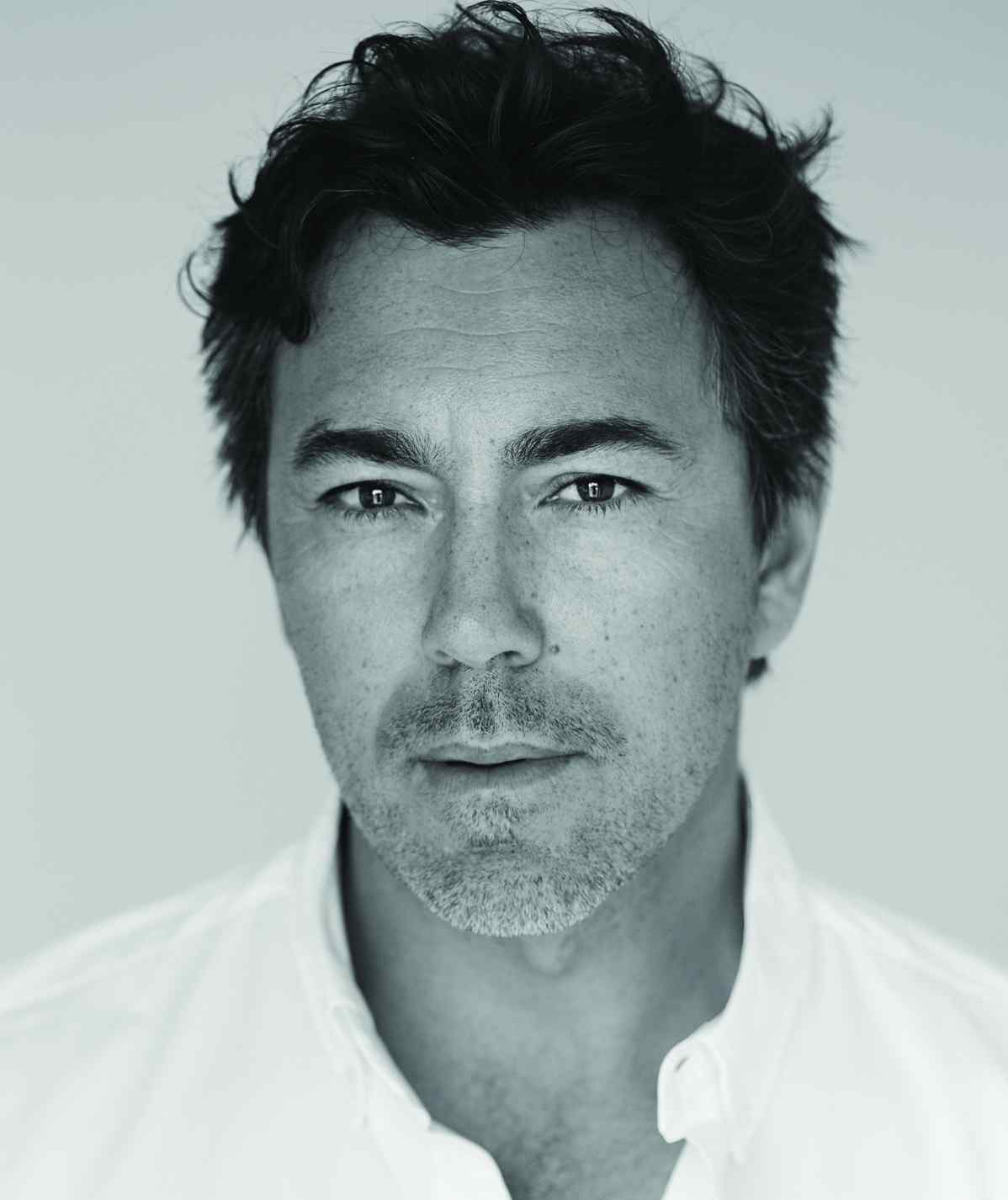 What is your earliest {childhood} memory of horses?
Unfortunately growing up in the city, my first memory of horses was the kids pony ride when the circus passed through town.

What have horses taught you the most?
Poetry, unconditional beauty, resilience and how much we should respect freedom. Many of the Brumbies I have photographed had the most horrific scarring all over their bodies, yet were just hauntingly beautiful. Each animal tells a story and a very powerful, poetic one at that. They promote imagination, emotion and thought. Their ability to continue thriving and surviving in the harshest terrains is beyond remarkable and their level of endurance is second to none. 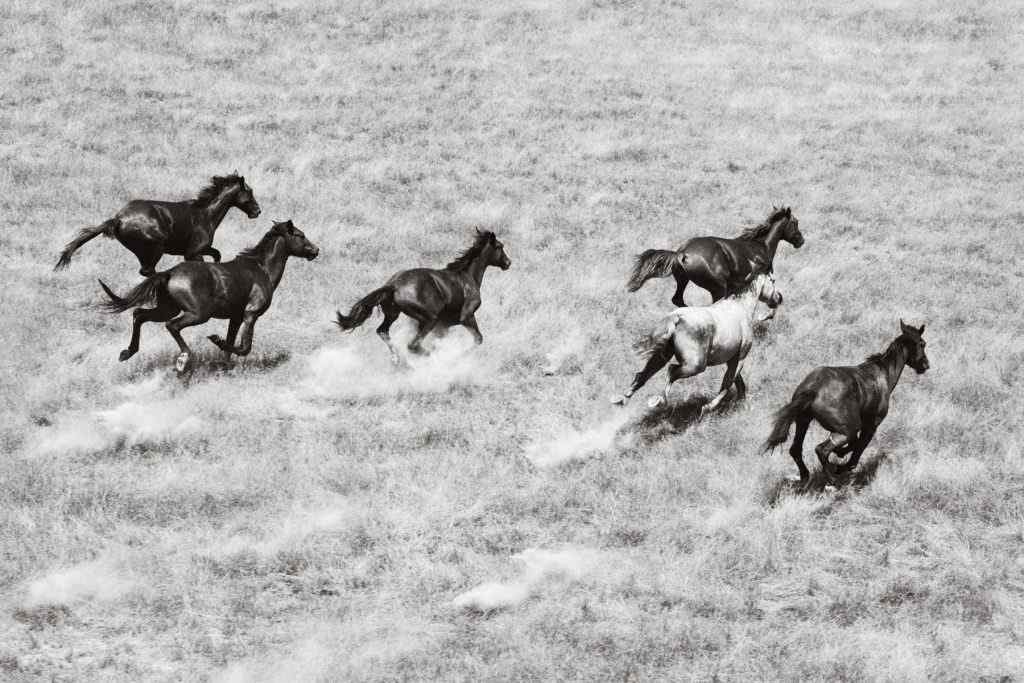 How did the ‘Wild Brumbies of Australia’ project come about?
This project has been an ongoing labor of love for me.  It is not only my passion but my way of paying homage to the magical country of my birth.
Over the next several years, I hope to create a library of art that captures the emotion and power of ‘Modern’ Australia  in its most raw and natural form. The Brumby symbolises what Australia means to me. They reflect and remind us of our own existence in Australia – a mix of almost every breed known to man in its DNA, like us as Australians. They evoke an illusion of fragility and untamed beauty which belies their enormous strength, determination and resilience which can endure and thrive in one of the harshest landscapes on earth.

Can you remember the first photo you took? If so please share this moment/experience with our globetrotters.
I’ll never forget my first glimpse of a mob of wild Brumbies. About ten years ago I was on a job in far north Queensland and we were heading back to camp in a helicopter late in the day. The doors were off and as I was looking out admiring the landscape and exquisite sunset in front of me, I suddenly caught a glimpse of the silhouettes of about eight wild Brumbies in the distance, who were moving at a fearsome pace leaving a cloud of dust behind them. The pilot, who just happened to be famed wildlife hunter Matt Wright, was able to swoop down so we could have a closer look. I remember like it was yesterday, how mesmerised I was by their raw beauty, freedom and strength. They were powerful creatures, their muscles rippling with each stride. And yet they moved with such grace, such utterly wild freedom, they seemed almost ethereal. I couldn’t believe my eyes. After that I was hooked and told myself that I would return to photograph these magnificent animals. 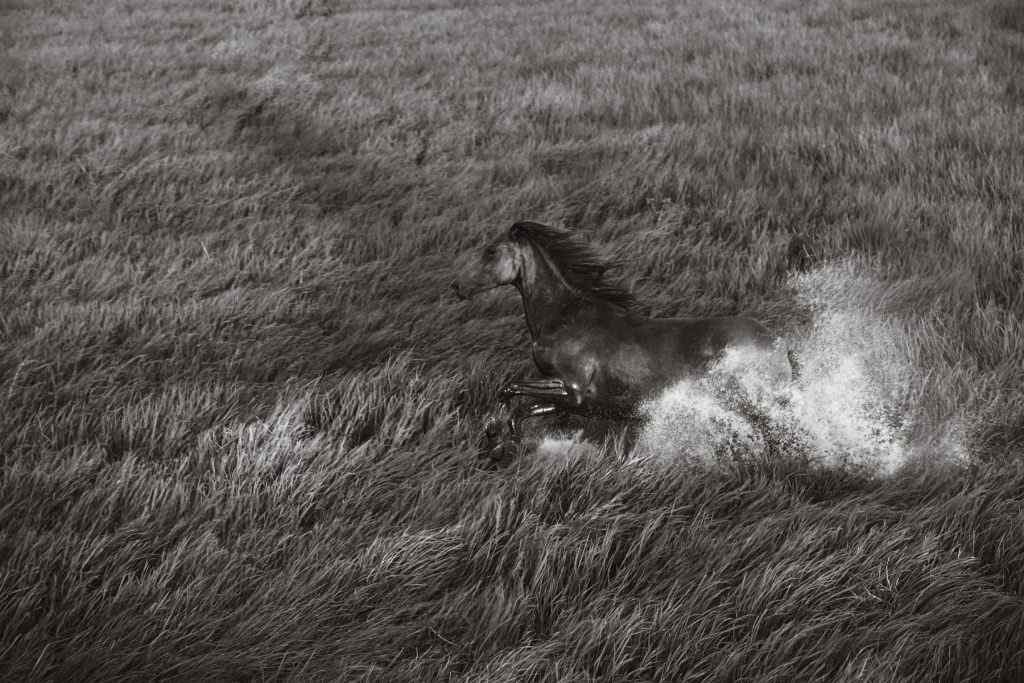 What was the most challenging part of this project?
There were a few actually. Aside from being an expensive exercise (e.g. the hiring of helicopters and pilots required for every trip), the project was time consuming and required a lot of patience. You don’t exactly see wild Brumbies roaming the local paddocks so you really have to hunt for them and this will often take many, many trips.

What was the most rewarding part of this project?
What I got from this project personally is almost too difficult to put into words. Aside from having a beautiful collection of images that I am very proud of, I learned so much about myself, the land and nature as a whole which cannot be justified nor measured in words. It was a genuine labour of love and is my way of paying homage to this magical country. 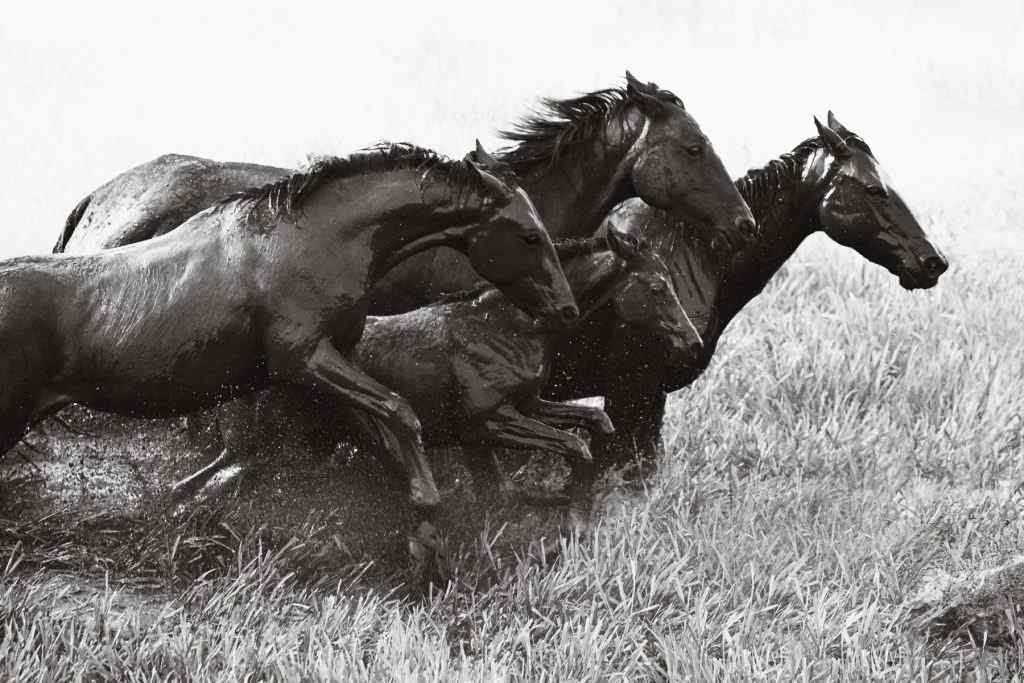 What photograph in your Brumbies series are you most proud of?
WILLPOWER (above) – we followed this mob of Brumbies for some time and I was just mesmerised by their incredible show of strength, willpower and determination to hold their freedom in the harshest of terrains.

What is it about equines that you love capturing?
Equines have to be one of the most alluring and aesthetically pleasing animals you can capture. Their level of fitness, muscular definition and markings are the camera’s best friend. There is something about them which seems to tap into so much of what I feel about Australia itself: their apparent fragility which belies their enormous strength and resilience, their untamed beauty which can endure and thrive in one of the harshest landscapes on earth, the way they move so gracefully, yet with so much power, the intensity they have in their eyes when you are in front of them. They are one of the most beautiful mysteries I’ve come across as an artist and photographer.

What are your ideal photographic conditions?
It really is dependent upon the project I’m working on. Nothing captures coastal, desert or tropical scenes like beautiful sunny weather with creative cloud formations, however there is much power and allure in photographing a storm rolling in or raindrops gracing nature and animal or human form. Melancholy, beauty, strength and fear can often be captured perfectly when the weather is at its most fierce. One thing is for certain however, powerful winds never make for an ideal situation no matter where you are in the world. For the Wild Brumby project, I was especially attracted to overcast or stormy days with quite flat light. This meant I could shoot longer days as the lighting situations were quite consistent. 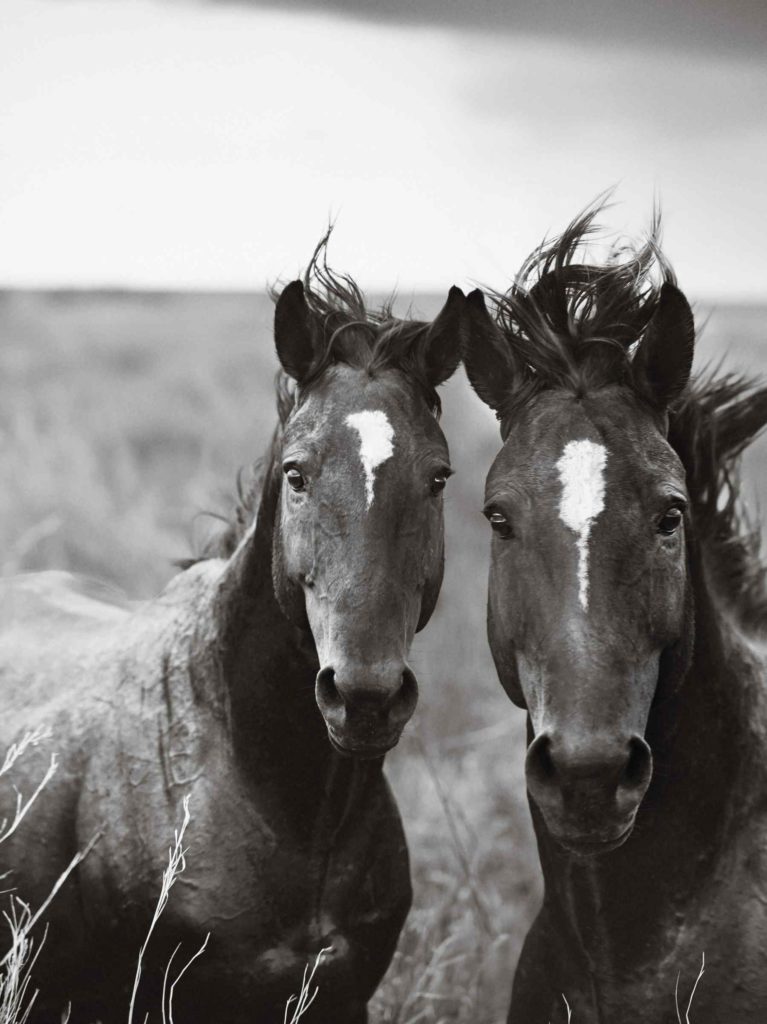 How would you describe your photography style? Do you like to shoot ‘off-the-hip’ or do you prefer to plan?
I would say modern, classic, freedom and form are words that come to mind if trying to describe my style. There is a high degree of planning and creative direction to all my commercial shoots, however when I’m shooting my fine art collections, I often travel on my own and just shoot from the heart amidst the climates, lighting and conditions that mother nature presents me with at that particular moment. You never know at what moment or in what environment you are going to get that perfect shot – so I would say I like to use a bit of both planning and ‘off-the-hip’.

What camera and lenses do you use?
I use Canon cameras and a mixture of Canon L series lenses and Carl Zeis lenses.

Do you have any trade tips for capturing equines in their best possible light?
Because of the nature of a horse, it’s never easy getting reflectors to even out ratios of light and shadow if needed. Therefore I find I get the best results in flatter light, i.e. cloudy overcast days, or evenly shaded areas.

‘Brumby’ is an illustrated hardback book, published by Thames and Hudson. The book was released on December 1st 2015 and is available for purchase via www.nicklearycollections.com Fine art prints are also available.