Name of breed: Norman Cob Country of origin: France Breed origin: The Norman Cob is named after the French region of Normandy where it was first developed. A light draught horse, it descends from the now-extinct Carrossier Normand, or Norman horse. The Carrossier Normand was a strong, hardy, big-boned horse with fantastic stamina and a […] 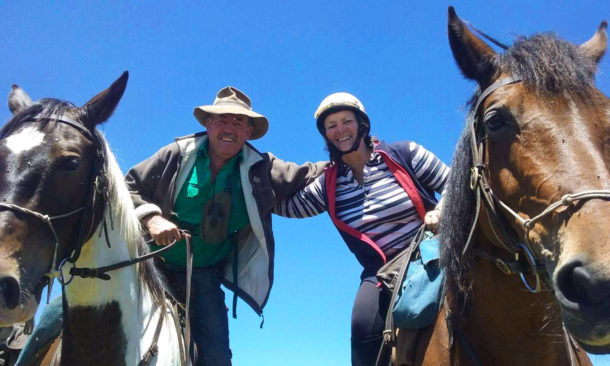 Get ready, globetrotters, you’re in for a real treat! The wonderfully talented Erica Neumann kept a journal of her horse riding holiday in the Victorian High Country of Australia and very kindly allowed us to share it with you all! Honestly, Erica’s in-depth account of this trip is perfect – I couldn’t have written it […] 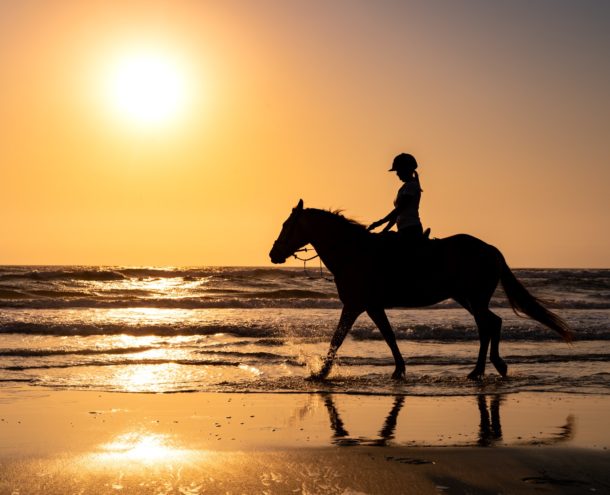 The world is slowly – at its own pace, stage by stage – reopening for globetrotters near and far. This article is dedicated to all of our Australian-based globetrotters as we navigate the recent state border openings. I wanted to give you a concise and to-the-point list of rides available to you in the next […] 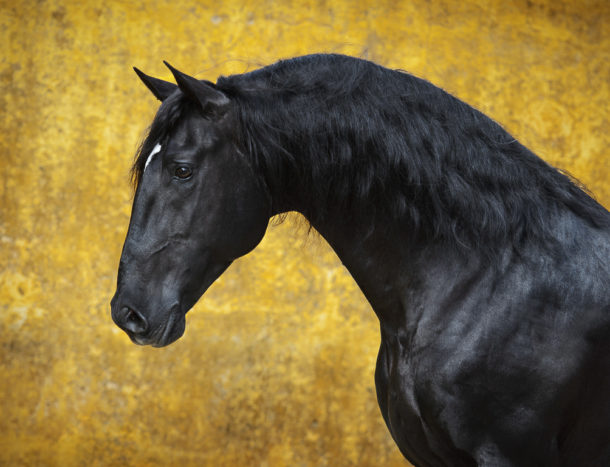 Name of breed: Lusitano, also called the Pure Blood Lusitano or Puro Sangue Lusitano (PSL). Country of origin: Portugal Breed origin: The Iberian Peninsula, which now sits within Spain and Portugal, has been populated with horses since 20-30,000 BC. Known as Iberian horses, they were influenced by horses from many other parts of the world as civilisations […] 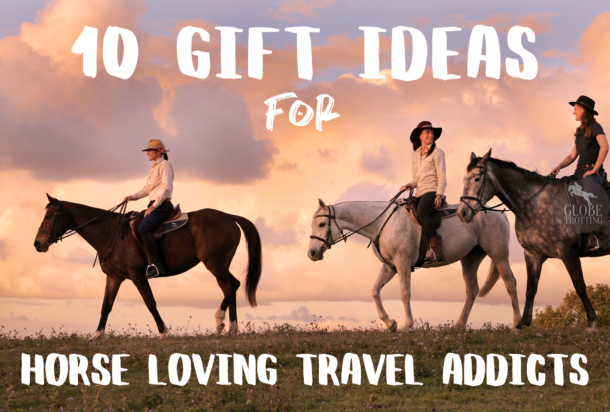 It’s that time of year, globetrotters – amidst the anticipation of welcoming 2021 and kicking 2020 in the pants, everyone’s rushing around trying to find the perfect gifts for their nearest and dearest. And since so many of you have loved ones who LOVE travelling on horseback, we thought we’d give you some inspiration. And […]

Name of breed: Međimurje Country of origin: Croatia Breed origin: The Međimurje is a coldblooded heavy horse named after the Međimurje County in what is now northern Croatia, where it was developed in the 18th century. In this region there were a great number of pure and cross-bred Arabian horses, which were brought to Međimurje […] 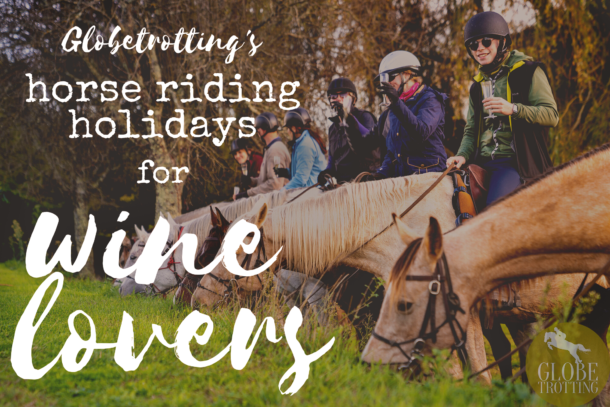 ‘Horses and wine – what more could you want?!’ This is a statement we hear ALL the time here at Globetrotting! And for good reason: life truly doesn’t get much better than trotting through beautiful scenery for days on end, stopping in at cellar doors and restaurants to wine and dine to your heart’s content. […]

Name of breed: Comtois. Country of origin: France. Breed origin: The Comtois breed comes from the Jura Mountains on the French-Swiss border. In the 4th century, the Burgundians of northern Germany introduced a heavy type of horse known as the ‘German Breed’ to the French regions of Jura and Franche-Comte. Here they mixed with oriental […] 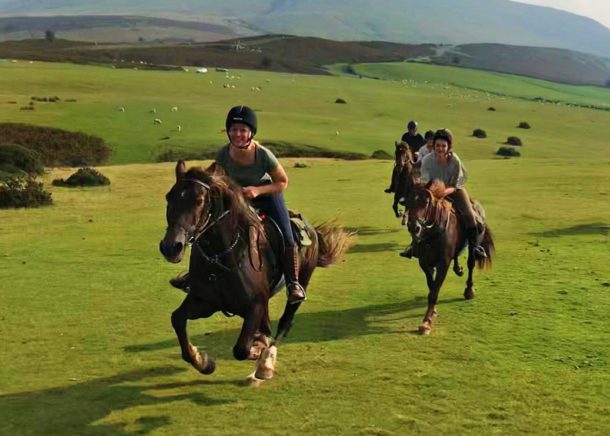 First-time, solo globetrotter Judy Enoch just got back from her COVID-safe horse riding minibreak in Wales. As one of the first to experience the Hay Triangle ride, she certainly seems to have given it her tick of approval! Read on to see what she had to say about this firecracker of a holiday: Were you […]

Name of breed: Yakutian, or Yakut Country of origin: Siberia, Russia Breed origin: In the 13th century, Genghis Khan’s army forced the Yakut people to flee Mongolia. They took their horses and headed north to the frozen wilderness of Siberia, where they relied on their tough steeds for survival. But what is remarkable is what […] 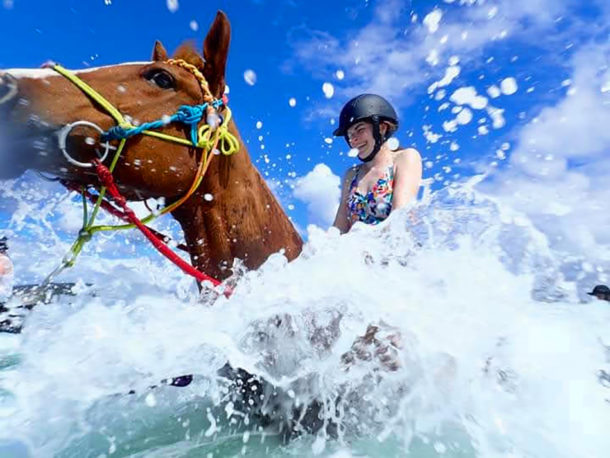 Talk about making a splash! Jennifer Colditz was one of our first globetrotters to embark on a horse riding holiday post-COVID. Without even leaving her home state of Queensland, she found herself in Globetrotting paradise in the form of the Rainbow Beach, Bush & Cattle Ride. And going by her feedback, this ride is back […] 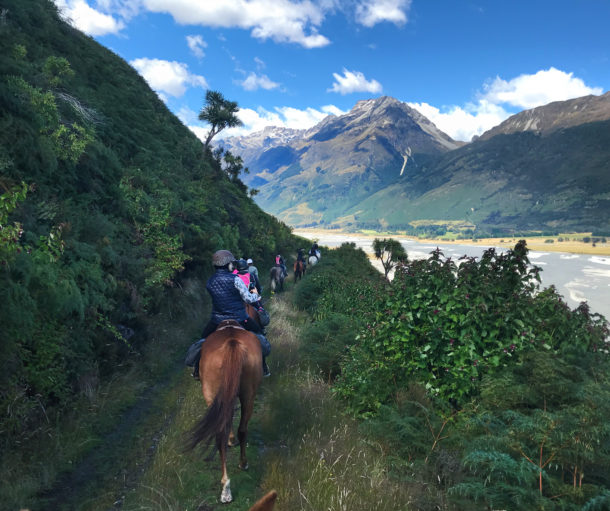 Apologies in advance if the loading time for this post is a little bit crazy, globetrotters, but when you’re given a treasure chest full of phenomenal photos from the Glenorchy Back Country Ride, choosing a handful to share is just about impossible! Genelle Bevan is a globetrotter and photographer extraordinaire. That’s her riding the beautiful […] 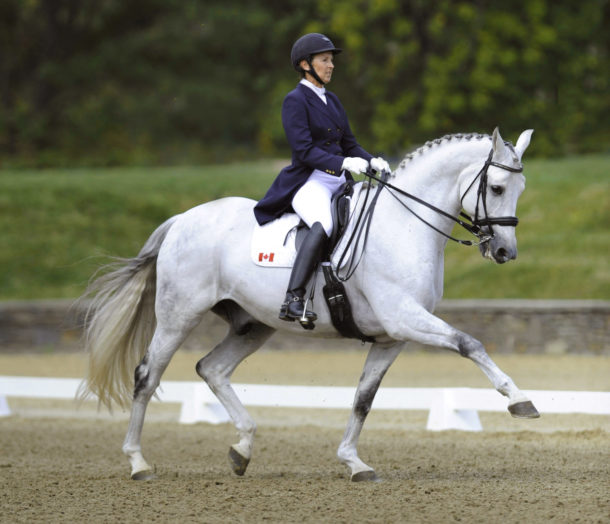 Name of breed: Oldenburg (also known as Oldenburger) Country of origin: Germany Breed origin: The Oldenburg is a warmblood breed that can be traced back to the 17th century in the German provinces of Oldenburg and East Friesland. Count Johan XVI of Oldenburg took a keen interest in horse breeding, producing fine war horses to […] 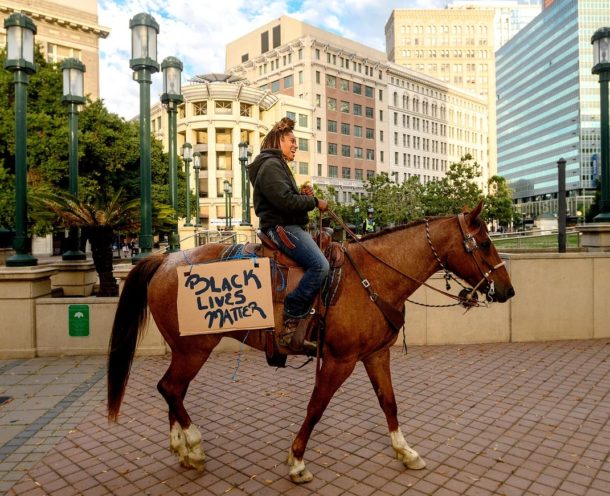 It’s become an iconic image in the 2020 Black Lives Matter movement: Bri Noble astride her Appaloosa, Dapper Dan, leading a protest with her fist high in the air after the murder of George Floyd. With Dapper Dan standing 17 hands high, Bri was literally someone to look up to at the Oakland protest and […] 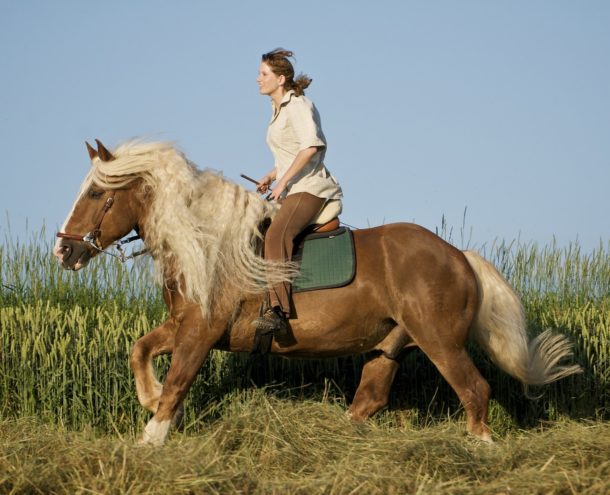 Name of breed: South German Coldblood (German: Süddeutsches Kaltblut) Country of origin: Bavaria, Germany Breed origin: The South German Coldblood is a descendant of Austrian Noriker horses that were introduced to Bavaria, in southern Germany, in the 1800s. The Noriker is a fine draught horse, but breeders in Upper Bavaria wanted to create a different, […] 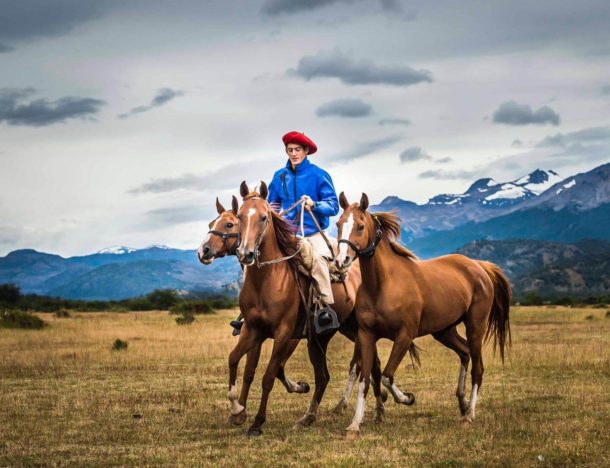 For globetrotters who have ridden The Patagonia Trail in Argentina or our safari ride in Kenya’s Maasai Mara, it’s common knowledge that guide Jakob von Plessen is a force of nature – a human whirlwind of charisma and courage with a penchant for sniffing out adventure. So it will come as no surprise to hear […] 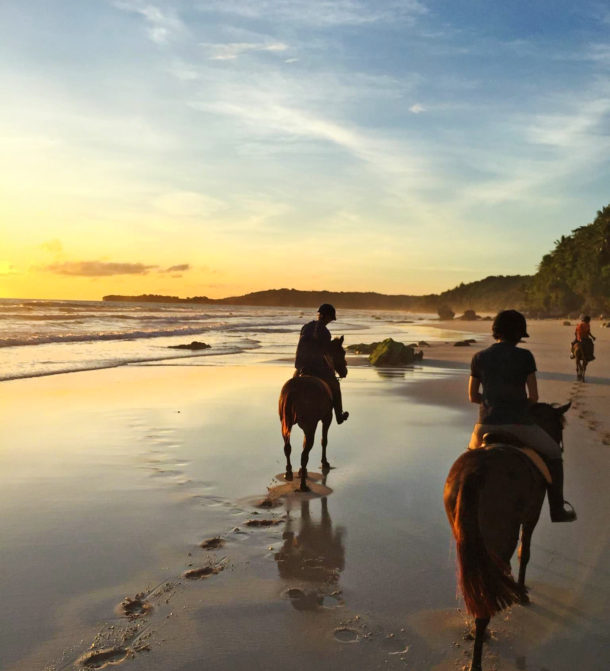 Jenny Bright is one of a handful of globetrotters who have been lucky enough to visit the island of Sumba, Indonesia for the Pasola Festival and enjoy the many delights of this slice of paradise. Afterwards, she shared such brilliant feedback with us that we HAD to share it with you! Check it out below. […]

Name of breed: Finnhorse, or Finnish Horse (Finnish: suomenhevonen, which literally means ‘horse of Finland’) Country of origin: Finland Breed origin: Finland’s official breed, the Finnhorse has been a fixture in its native country for many centuries. However, it has only been ‘official’ since 1907, when the studbook was established and pure breeding became the […] 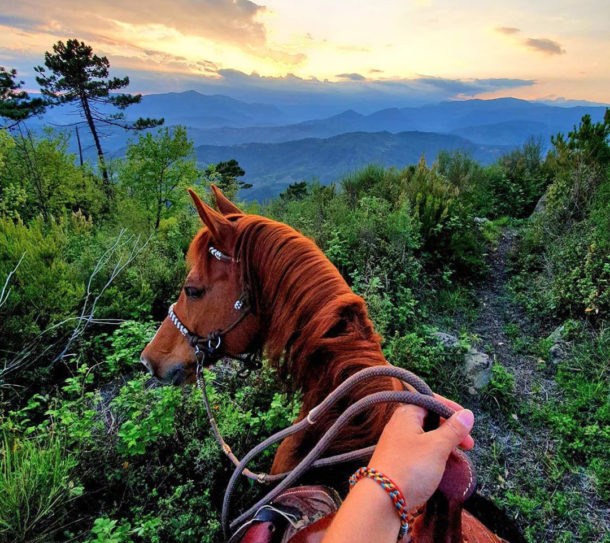 Selina Micòl Wendt is an equestrian based in Liguria, Italy, whose Instagram account @selina_and_vispo celebrates the unique joy and freedom of riding in nature. ‘Stay wild and free’ is her motto, and we say AMEN to that! Selina kindly took the time to give us some insight into her life with horses – and more […] 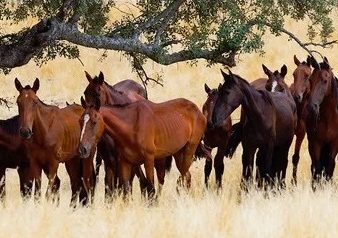 Name of breed: Retuerta (Spanish: Caballo de las Retuertas) Country of origin: Spain Breed origin: The Retuerta horse is named after the ‘retuertas’, flooded, sandy areas where animals come to drink in what is now Doñana National Park. This region of Spain is the homeland of the Retuerta, but it is believed to have roamed […] 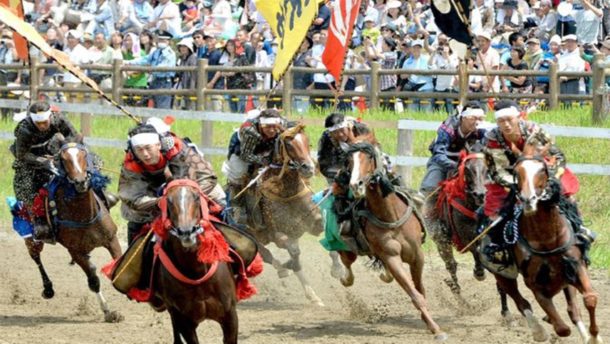 In the Soma district of Fukushima Prefecture, a famous horse breeding region in Japan, a festival called Soma Nomaoi has been celebrated since ancient times. It’s said to have originated in the early 10th century as a series of military exercises undertaken by the samurai of the Soma Clan. Even today, the role of ‘Supreme […]

GOT YOUR EYES PEELED FOR HORSEY GIFT IDEAS?

Look no further than GT Apparel – gear made for those who LOVE to ride and LIVE to travel!

From stocking stuffers to big under-the-tree presents, there is something for every equestrian in your life.