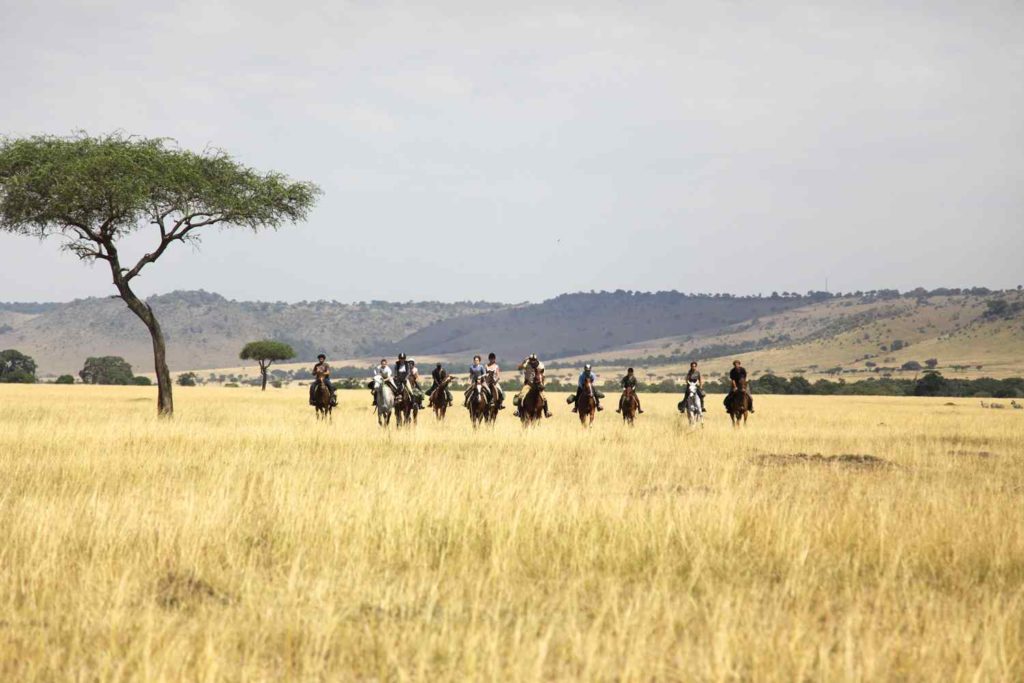 I lean into my horse’s neck as her gallop quickens. The herd swerves to the left as my mare expertly follows, gaining ground on a couple of tail-end zebras. My hands tighten on the reins as I encourage her deep into the stampeding herd of zebra. Stripes of black and white move in a cryptic wave around me. Impala leap hysterically into the air, eland stampede and giraffes dance awkwardly on the outskirts of the herd. The thundering noise of hooves hitting the ground is deafening and the heady smell of dirt and horse sweat swirls in the air as my mare tugs on the bit.

This is Kenya on horseback.

I’m six days deep into a ten-day horse riding odyssey through Kenya’s heartland, the world-renowned Maasai Mara. I’ve been proposed to by a toothy, over-ambitious 22-year-old Maasai warrior, waded my horse across the tea-stained waters of the Mara River while hungry hippos and smiling crocodiles watched from upstream and been petrified at night by peeping toms (baboons) outside my tent.

It all began in Nairobi less than a week before, when my father and I joined two eager, jodhpur-clad riding enthusiasts from the Unites States and were transported six hours by car to the foot of the Lolita hills. Our riding guide for the ten days is Jakob von Plessen, a twenty-seven-year-old Argentinian who has adopted Kenya as his home for six months of the year.

Arriving into our first camp nestled amongst a grove of fever trees, we greedily consume our sundowners. Traditional safari-style green canvas tents blend into their surroundings; the spacious walk-in tents have comfortable make-shift beds with a side table and an outside wash basin with hot water. A long-drop loo sits privately behind the tent and hot showers are available each night.

Owners Tristan and Lucinda Voorspuy go to great trouble to make sure their riders are comfortable on safari. It’s the finer details that make the real impression on guests.

Going to bed on my first night, the baboons cackling in nearby trees, I slip underneath my sheets to find a hot water bottle lovingly placed under the covers. 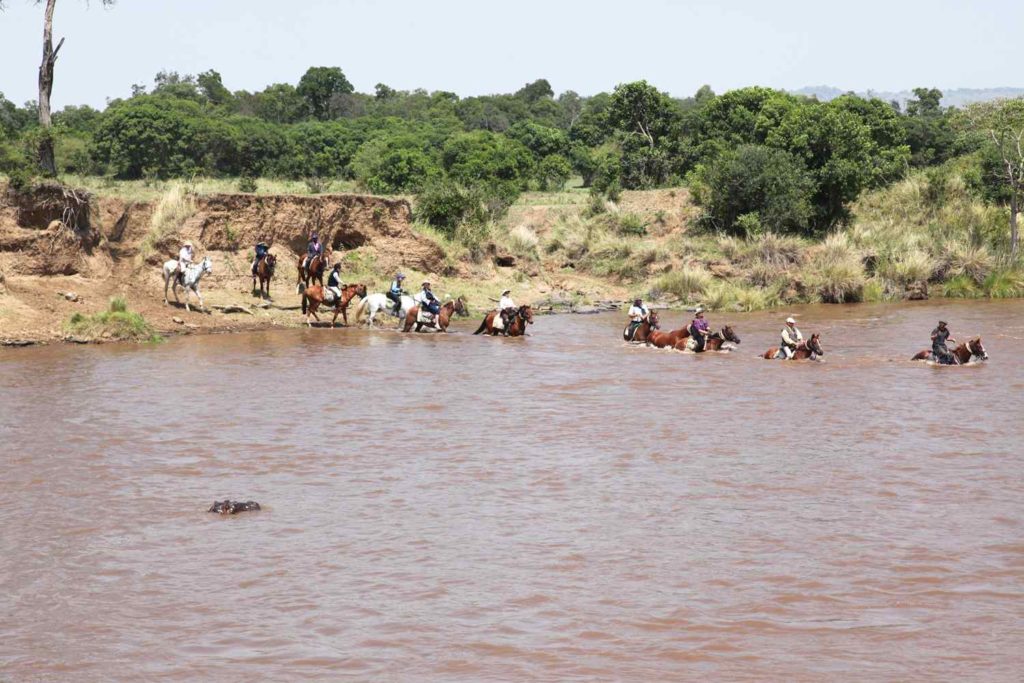 The next morning I’m woken by a Maasai outside my tent cheerily repeating the words ‘morning, morning.’ In the darkness of the tent, he leaves a tray of steaming hot coffee and two digestive biscuits on my bedside table, sustenance for the dawn ride.

The five horses are saddled and tied to an overhanging rope when I arrive. The grooms, dressed in their blue overalls, introduce themselves, sharing toothy grins and firm handshakes. The horses are in exceptional condition and glisten in the morning light; Jakob matches rider with horse according to ability. They recommend that riders are comfortable at all paces and able to gallop out of trouble if the need arises.

I’m teamed with a smart chestnut Thoroughbred mare named Witch. The riding posse spreads out over the rolling plains and we ease into our first canter. Witch forges ahead, stretching her legs across the earth. With the steady drum of hooves hitting the ground, we disturb a grazing herd of impala and zebra who scatter like ants across the savanna on our approach. I gasp in delight as the scene unfolds  – a rare opportunity to watch the wild game in full flight.

After a sumptuous three-course breakfast, Jakob introduces us to father and son Lemeria and Parseina (also known as James) Letoluo, members of the Maasai tribe who own the land. The men greet us with ear-to-ear grins revealing amber-stained teeth, asking us our names and the country we are from in broken English.

James is 22 and has a wife and infant son. He explains to us the period of warriorhood for the Maasai. Traditionally, the Maasai warriors had to kill a lion for initiation, however with the increasing numbers of tourists to the area and education the Maasai understand the importance of lions for tourists and money.

Out of interest, I ask James when he will take his second wife (a practise allowed in Maasai culture). He quickly retorts, looking directly into my eyes, “I will marry you, how much?”

Thinking on my feet, I remember James and his father boasting about their herd of four hundred cattle.

He gasps at my audacity and says, “You are too much, too expensive.”

I leave the table happy with my negotiation skills.

I return a short time later to see my father and James sitting smugly at the table. My father smiles and says, “Kate, I have negotiated with James over your pending marriage and the final agreement is seven cows, five goats, blankets for the second wife, snuff, 10kgs of honey and the first son will be given thirty cows.”

“Also, you will have to build your own cow dung hut to live in.”

I laugh nervously and politely decline the offer.

That evening Jakob announces that the local Maasai have offered to sing for us before dinner. We sit with our backs to the fire, the night dark except for the illumination of a hurricane lamp and the bubbling embers of the fire.

In the near distance, the sound of rhythmic heaving is heard resonating in the surrounding bush. The guttural sound becomes louder and louder as a line of ten Maasai men appear pounding the ground with their bare feet, thrusting their heads back and forth in harmony with their singing.

They perform the traditional Maasai jumping song. Two young warriors enter the centre of the circle and started leaping high into the air, maintaining a narrow posture, never letting their heels touch the ground. From time to time a wild, animalistic scream erupts as another two warriors enter the circle.

The Maasais’ black-as-coal faces glimmer in the moonlight as the hypnotic hum sends shivers up my spine. 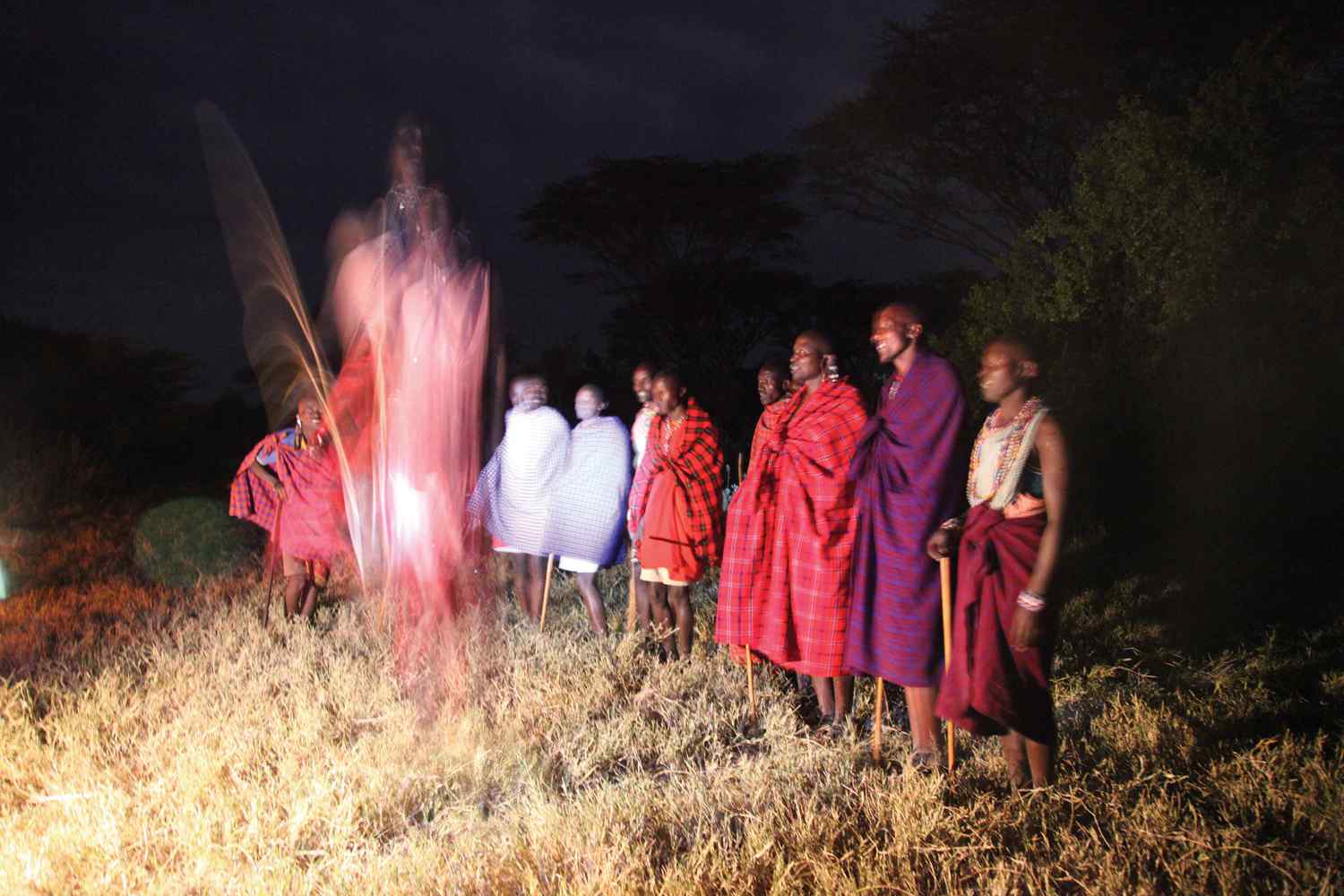 The next day we break camp early as it’s the longest ride of the trip, covering nearly 48 kilometres across the Mara Game Reserve. The reserve belongs to the Maasai people and their villages are sprinkled beyond the borders.

We reach the crossing of the Mara River before lunch time. Our guide takes the lead, looking up and down the fast-flowing river before he pushes his horse into the murky water. The honking sound of a nearby pod of hippopotamus resonates upstream as I direct Witch in. I remembered a conversation the night before with Jakob when I voiced my concern about the dangers of crocodiles when crossing the river. He answered my question casually: “Don’t worry, they are more than likely to take your horse before you!”

I need not have worried.

With five horses and their riders safely across the river, we gradually ascend to our next camp on the edge of the Mara Game Reserve, atop the escarpment of the Rift Valley. 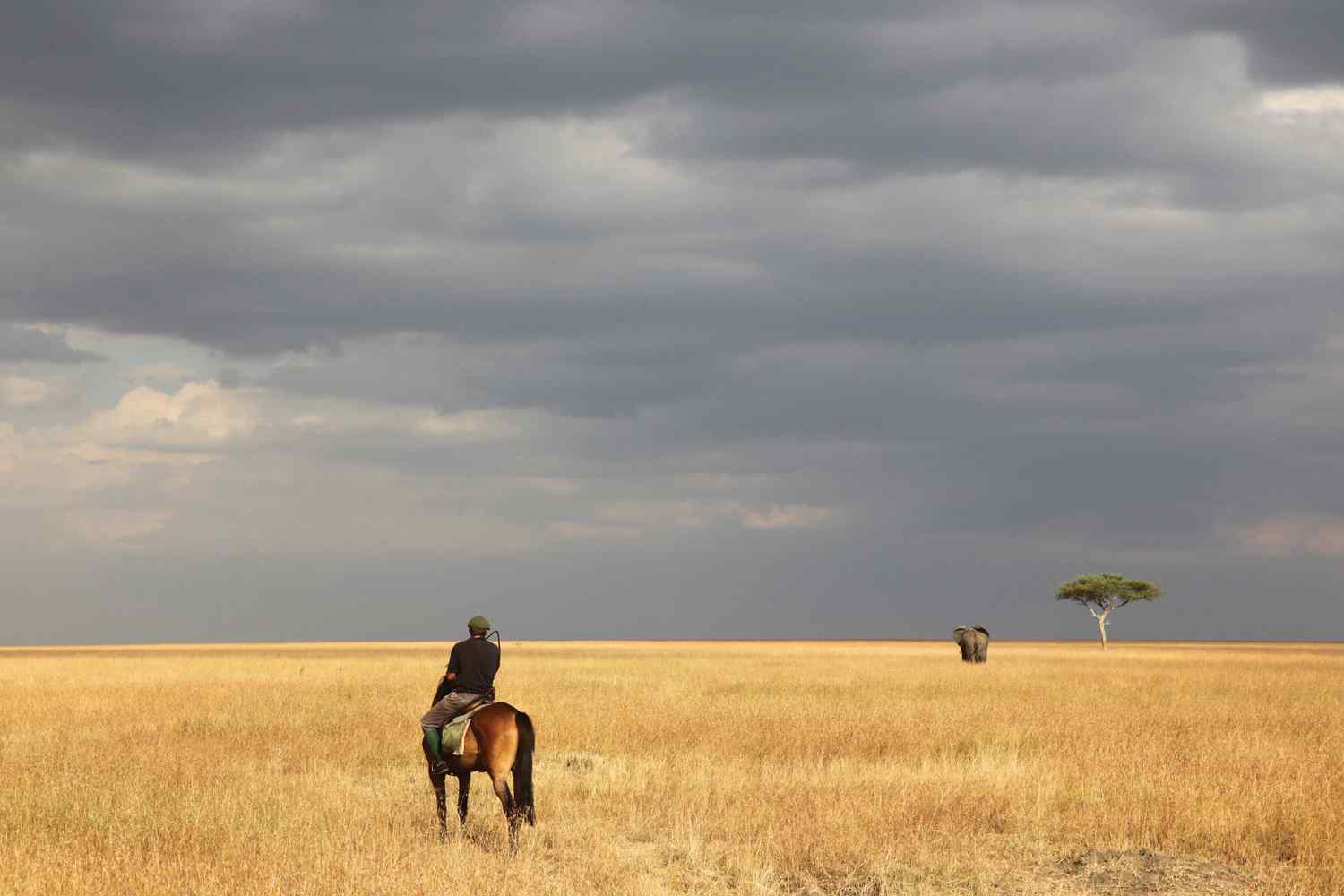 After two days of riding along the Rift Valley, a lush plateau resembling a manicured golf green which is the perfect playground for large numbers of zebras, eland, Thompson gazelles and giraffes, we move towards our final camp beside the Mara River.

An hour into the ride, we find ourselves in a Mexican stand-off with two aggravated bull elephants wanting to reach the river. The bulls are uptight and looking confused by the strange-scented animals with creatures atop their backs resembling hairless baboons who are blocking their path. My horse immediately spins on the spot, sensing the nearing danger. 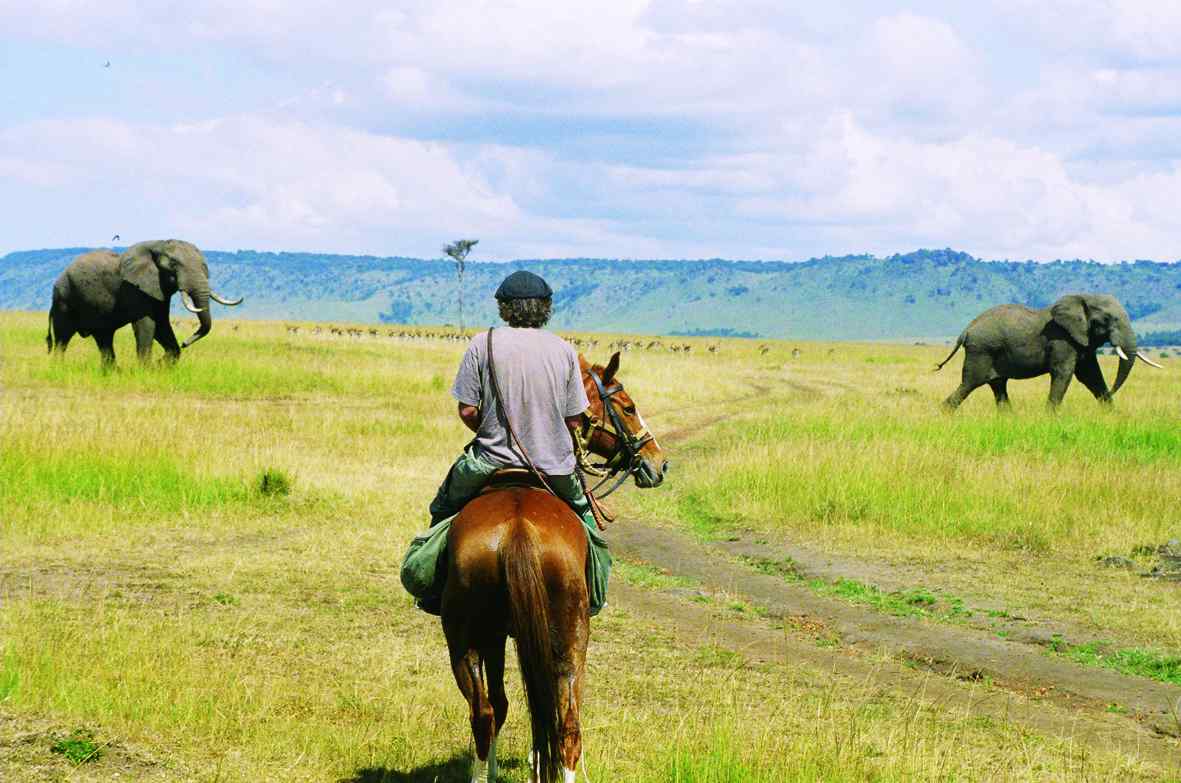 Jakob yells for us to get behind him as the larger of the bulls flaps his ears back and forth, trumpets loudly and begins to charge. Jakob makes an attempt at cracking his whip. The noise deters the massive grey mammal long enough for us to make a shotgun getaway across the river.

The next day we bid the Maasai Mara a sad goodbye and drive to Deloraine, a debonair, colonial homestead where we will spend our last two nights.

Over the next two days we ease back into the unadulterated pleasures of long, soaking baths, sun baking beside the pool, lazy lunches and morning rides. Even with these luxuries I find myself yearning for the smell of wood fires, the long, rewarding days of moving camp on horseback, open showers beneath a night sky pinpricked with millions of stars and cantering alongside Africa’s wildlife.

There is something beautifully intoxicating about crossing the Maasai Mara on horseback. 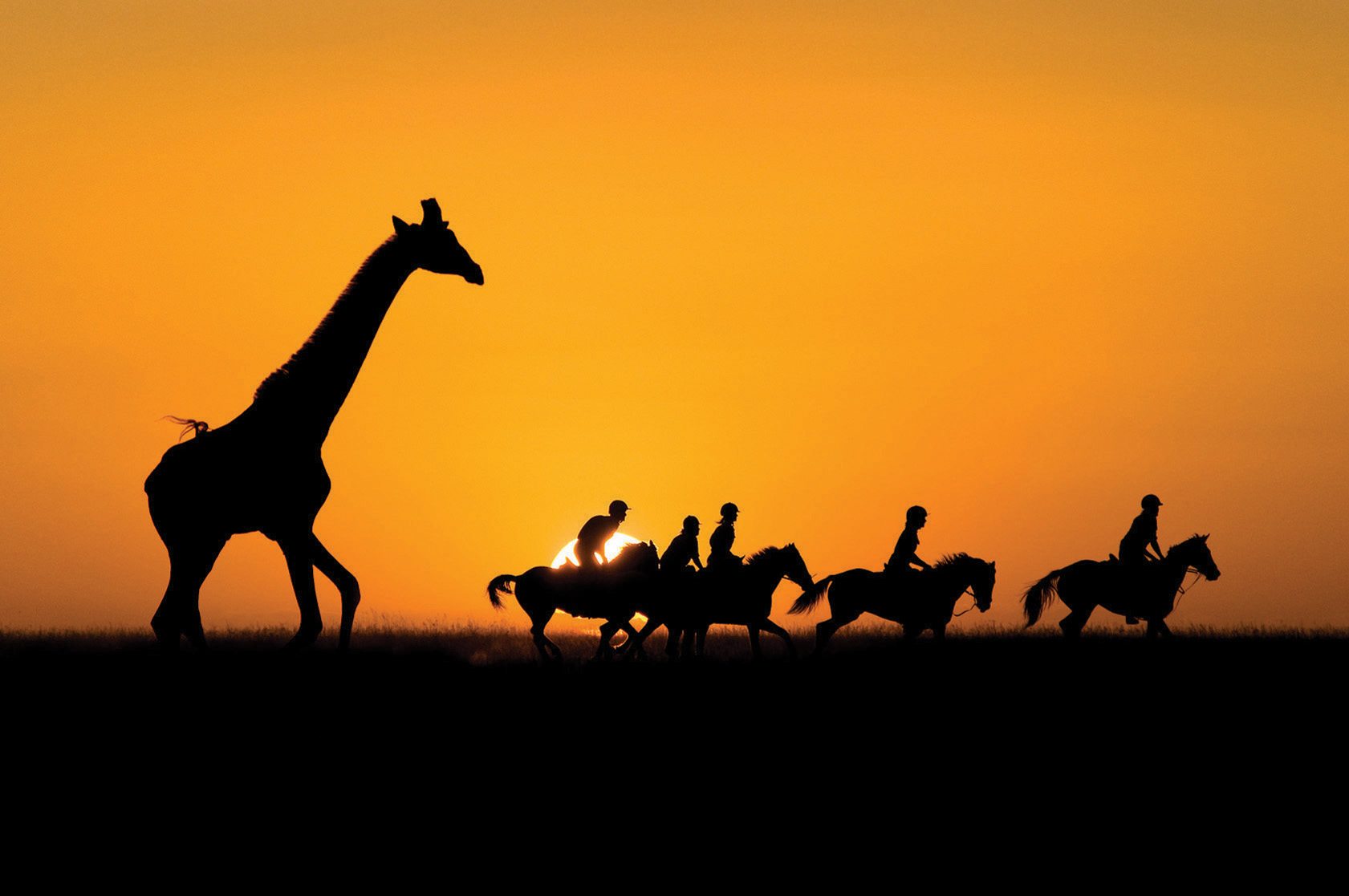