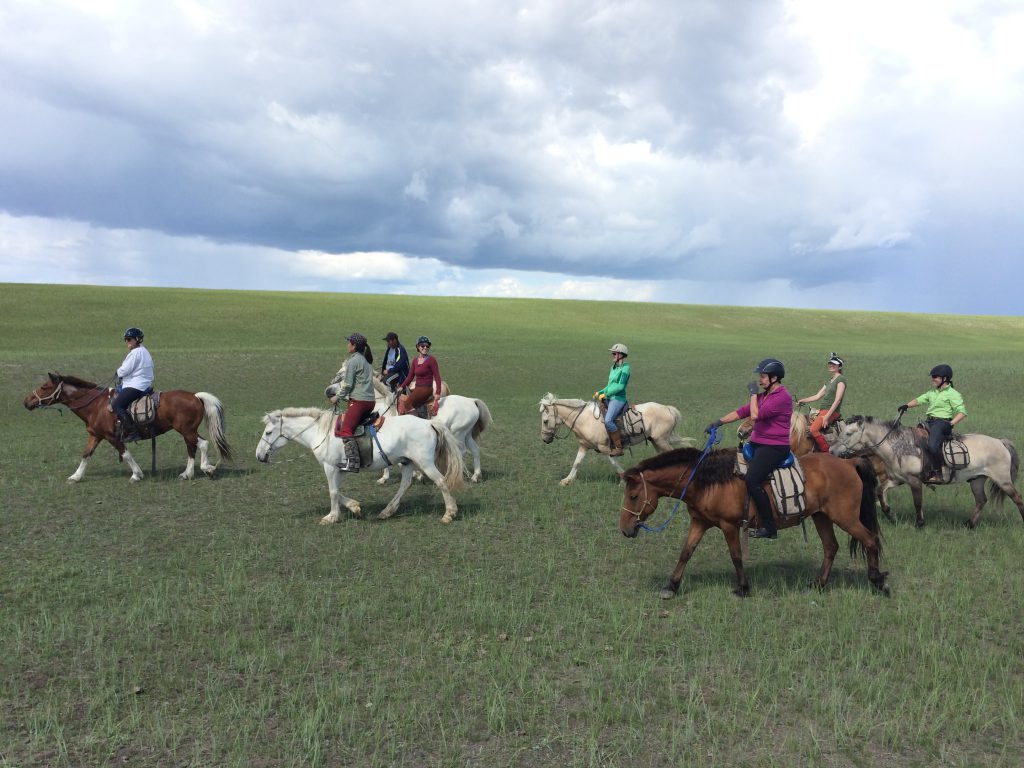 If you missed Part One of Stacey’s globetrotting adventure through Mongolia please click here. Now we pick up on Day Eleven. Settle in for another wonderful ride globetrotters…

Today turned into a massive riding day. As breakfast we were told our ride to see the Tsaatan would be around three hours. After eight hours of solid riding through mud, rivers, rocks, crevices, rainforest, mountains and a glacial storm, we finally arrived at their summer home. Again I was swapped from my horse to another, a red/blue roan gelding I named Fatty because he is as round as he is tall. He has a very easy going nature but will NOT stop eating! Regardless, he was more than capable of navigating every terrain challenge he was presented with, not ever panicking but using his intellect to forge through the unforgiving mud and rocky outcrops. He wasn’t particularly fast, but was steady and trusting.

Once we reached the steep hill which led to the Tsaatan’s camp, we saw our first reindeer! We had to dismount and walk down the muddy hill (a challenge for clumsy me, but no falls!). Our camp was set up just outside the elder Shaman’s tipi/ger.

The Tsaatan are welcoming and rely heavily on tourism for their livelihood. We found out later that at times they feel they cannot be themselves but must do it to survive the harsh winters. After a few cuddles with a very old grunty reindeer, I tried some reindeer milk cheese curd (very strong taste) and met the community’s most respected Shaman. Like most Mongolians, his face was aged beyond his years and he was bordering on stern. Nevertheless, his ger was warm and light and his family very accommodating. 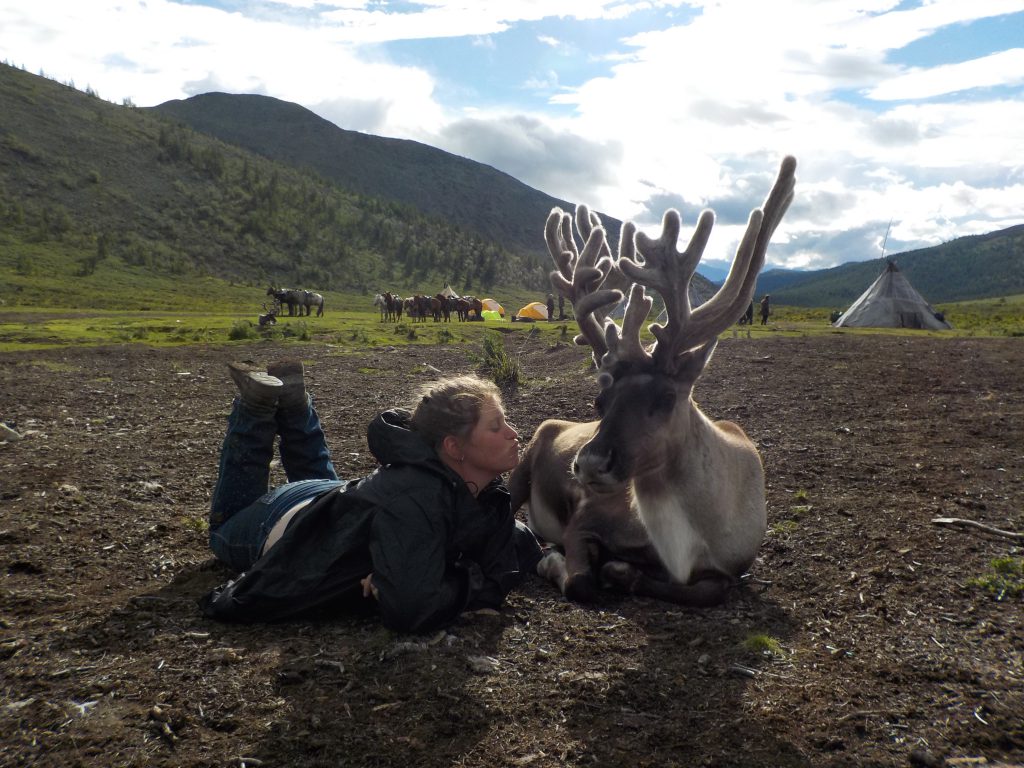 Today was spent in the Tsaatan community. Tuul told us it was a ‘rest’ day, but there was too much going on for much rest!

The reindeer are by far the sweetest animals ever. I’m unsure whether they have become accustomed to humans over their constant contact, or if they are naturally curious and friendly. The babies are playful and mischievous (oh so cute!) and as I discovered LOVE a good antler scratch! One young guy followed me around while I was brushing my teeth, insisting on licking my hand and toothbrush.

Tsaatan use the reindeer for milk, meat and transport, so they are very valuable to them. They used to keep them close at night (by tying them up) but wolf attacks increased and the reindeer guard dogs were unable to fend them off, so the reindeer are now released and herded up into the mountains at night where they stand a better chance of defending themselves. Each reindeer group returns to camp in the morning, either by their own volition or by herding. Once in camp they settle down for sleep in the reindeer patch (a big patch of dirt) and it is a common sight for all 80 to be grunting and snoring together. They are also protected from outside threat by the community’s dogs who bind together like a wolf pack at the slightest ripple of change. It was fascinating to witness nature take its course without human interference.

As the morning went on, we took it fairly easy. I was invited to help knead and combine the dough for traditional ash bread. The bread is very similar to damper, albeit shaped like a donut and cooked within the ashes of a fire. It tastes like bagel and is quite dense (and sweet).

We met one of the Tsaatan elders who has never married and lives by herself. Her ger was the most modest I have seen – without decorations or even a bed! For one person, her ger would be cozy. But for the nine of us, it felt pretty oppressive and claustrophobic. The Tsaatan do not have electricity but run from portable batteries. When electronics or batteries are used beyond their life, the Tsaatan are left with nothing but felt and reindeer (a life which most relish).

After lunch we were given the opportunity to ride a reindeer. Embarrassingly, mine all but collapsed under my weight so I was unable to participate. Instead, I took a mental break and a nap for most of the afternoon. In the evening it showered and I had my stones read by a Shaman. My reading was very generic – in life you will have challenges; don’t let your hesitation kill you) and I found it hard to engage in a ceremony so foreign. A sentiment which extended late into the night while attending a Shaman ceremony to call the spirits, which felt very much like a tourist performance. I was disappointed with the experience as I would have liked to immerse myself in a genuine ritual, but apparently (according to the sha-woman) it was not the right night by the lunar calendar to converse with spirits.

I was woken by a reindeer attack! One of the youngsters was feeling a bit uppity and spent a good ten minutes pawing and licking the outside of our tent before moving on to inflict the same on the other campers at the site. Early morning seems to be the time when juvenile reindeer are at their most rambunctious (destructive) and I thoroughly enjoyed watching them annoy both humans and other deer.

Today our group hopped back in the saddle for the 7 hour ride back to Hogrog. The weather was luckily fine and a bit cool, making it a bit easier on the horses to traverse mountain tops, valleys, very dense bush and multiple river crossings. The day ended with a long canter across the plains; Fatty being impressively nimble over ground holes and grass mounds! Bed at 9pm – bliss! Woke early this morning and spent some time with the wrangler’s pocket palomino who ended up falling asleep in my lap. While the wranglers and guides continually warn us how wild and spooky these horses are, it became intensely clear to me that this may be more a result of training and interaction methods rather than the innate disposition of the horse

We had our last ride today! Fatty and I had some good canters and herded some yak. His quiet willingness and subtle sensitivity slowly grew on me, and I was sad to say goodbye to such an all round honest trail horse.

The afternoon drive back to Saridag tourist camp in Renchinhulme went without incident, and I was glad to have a mattress to sleep on (no matter how firm it was)! We had some time to relax so the group went for a wander in the soum (I had my first chocolate and coke since the start of the trip!) before returning to camp for dinner, an impromptu dance party in the dining room, and a challenging game of Frisbee (nobody was very good at catching or throwing, and the wind was against us). Lots of laughs though! 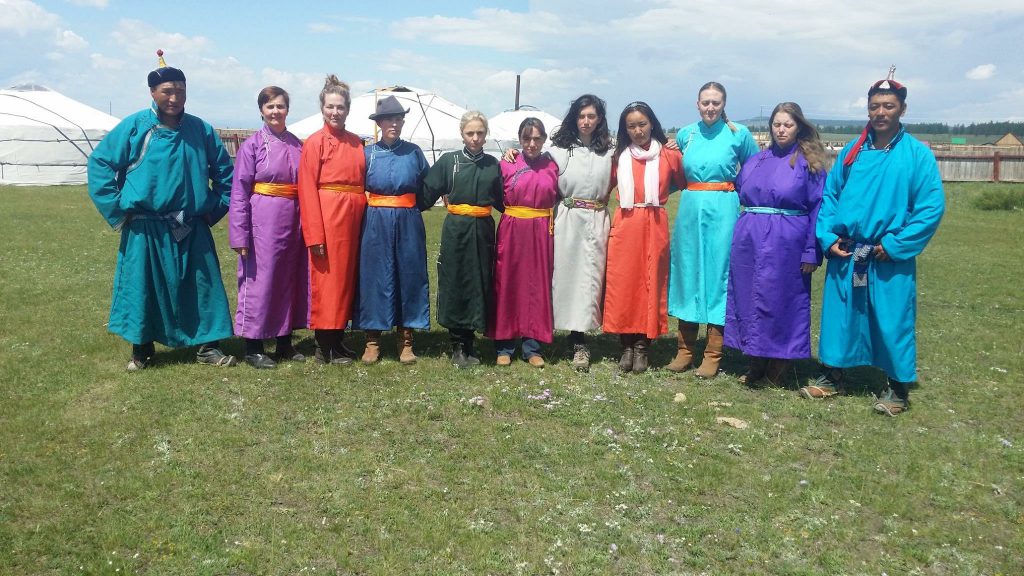 Packed up and hit the road in the rain (again) for a nine hour drive across all the rivers that were impassable last week. Our camping spot for tonight was situated in the middle of a deep valley where we could view eagles nesting and a beautiful stretch of river. Some of the girls climbed the mountain but I was feeling lazy and opted to sit and chat with Caroline.

After dinner, Duuyaa the warrior collected wood for a big fire, which we all sat around and exchanged our reflections on the trip. It was refreshing and heartwarming to be able to converse so freely in such a forum. Othuu had obviously been dying to have the opportunity to ask about Mongolian vs Western toilet habits, and entertained us all with his questioning. A night to remember with a close-knit group of humans. 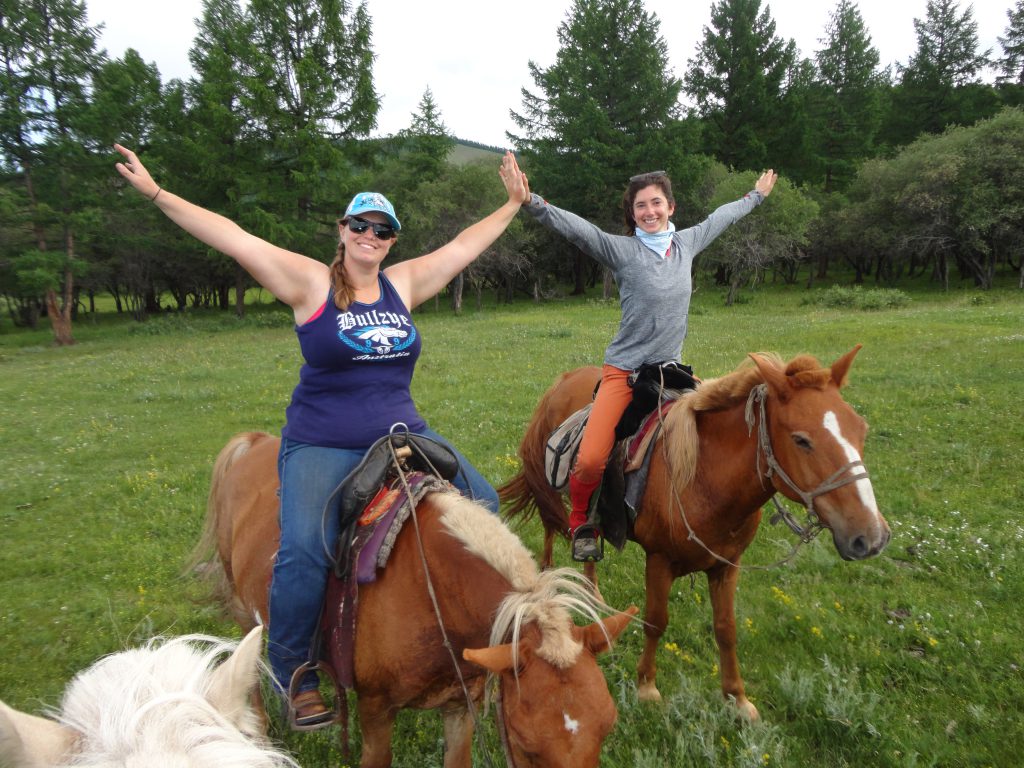 Left early (7am) in the cars for Lake Khovsgol luxury tourist camp. Everyone was looking forward to some free time and a hot shower and a real proper bed!

After driving for a few hours we reached the lake and took a motor boat up the lake to the camp (Ulaan Bayer), stopping at Wishing Rock along the way. Wishing Rock is on the highest part of a peninsular; a rocky outcrop bearing an Ovoo/totem where you can pray and make wishes. As I walked around the totem three times, I wished for patience and understanding.

Back in the boat and onward, we reached the ger camp in under an hour. I was absolutely stoked to get chicken schnitzel for lunch and spent the afternoon quietly reading in bed. Dinner was a nice affair and was followed by ger chats by the fire. 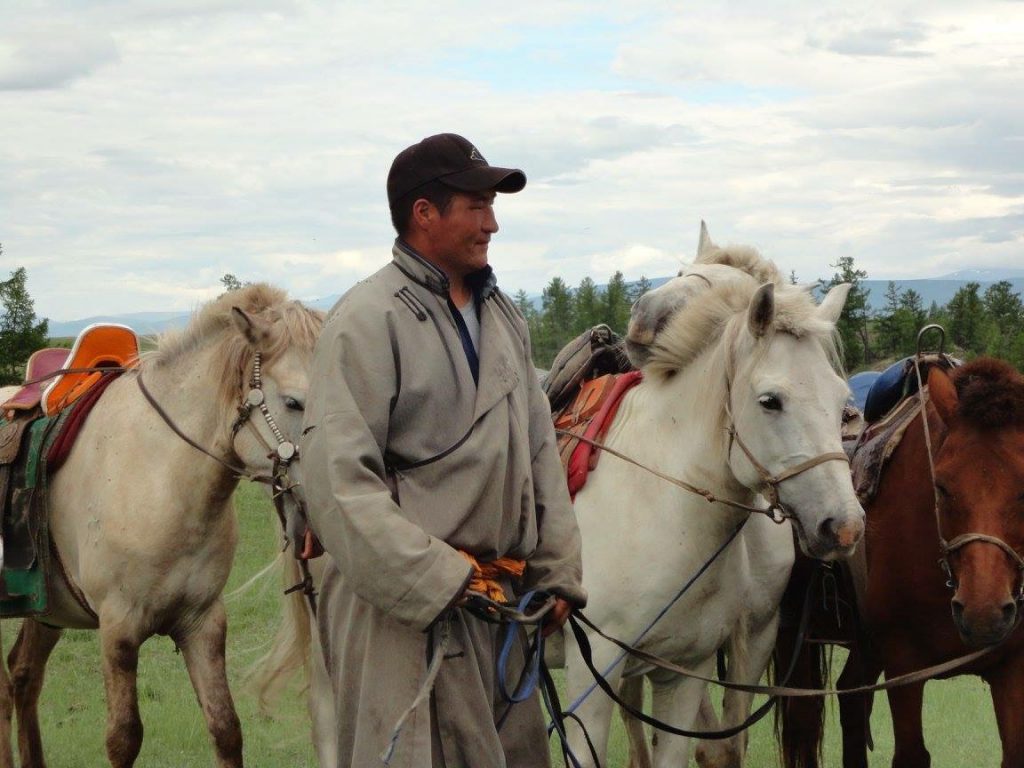 Back in the speedboat and on dry land, we took our last car trip in KV to the airport. Along the way we came across a herd of Bactrian camels. While they roam the Gobi and other parts of Mongolia as wild animals, these ones seemed quite used to people. I attempted to make friends with one but chickened out once he started to approach me with too much confidence.

Once we had reached UB we took a tour of a large cashmere factory before returning to Bayangol. Georgia and I were glad for a better hotel room this time around!

Our evening was spent enjoying a Mongolian cultural concert at the town hall. We saw a truly incredible throat singer, several musicians playing traditional instruments, masked dancers, modern singers, and two contortionists. It was a great way to round out our experience of the country.

Dinner was hot pot (with out own little stoves!). We were lucky enough to meet and dine with Tuul’s family, an occurrence which has not previously happened with any other tour group. Tuul’s kids were so excited not only by our presence and seeing their mum but by the ‘treats’ she had bought them – fresh apples, bananas and a soccer ball. Once again I was humbled by the gratitude and humility of our guide and her people. 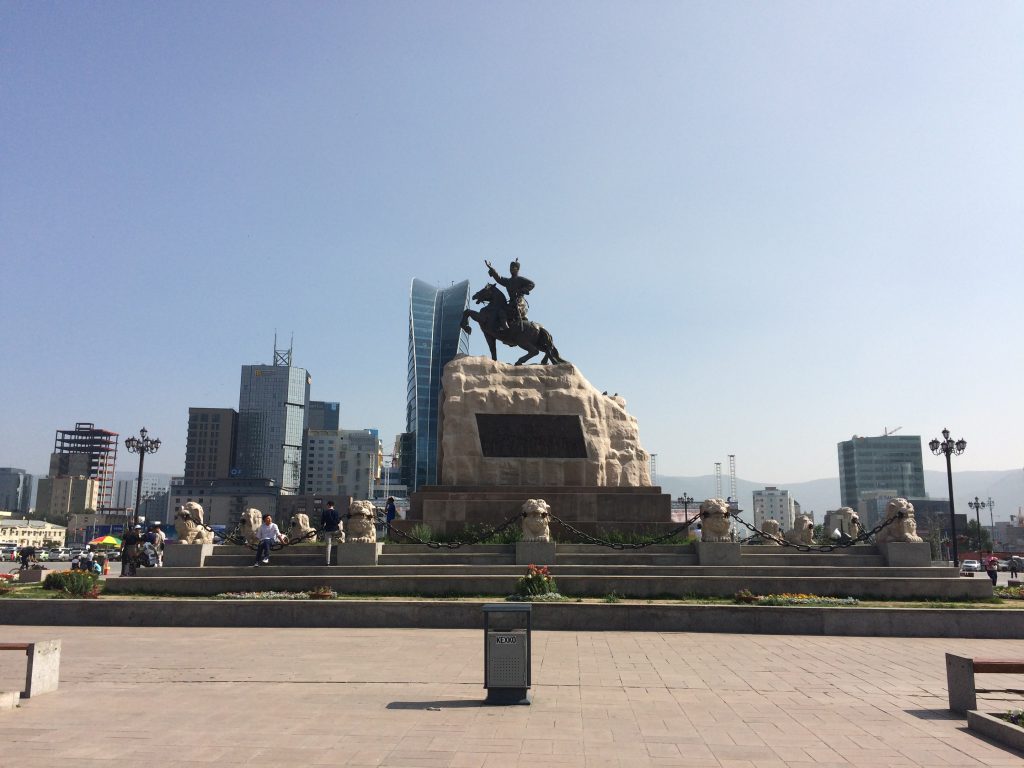 Had a sleep in for the first time in a long time! Today was our last day as a group in Mongolia. We all trekked to the black market for last minute shopping and souvenirs. I was hoping to find some curly-toed Mongolian wrestling boots, but apparently the width of my calves also transcend international footwear. Unlucky me!

Lunch was at a Mongolian BBQ restaurant; a buffet-style cafeteria where your food is cooked in front of you. It was delicious! And my favourite meal in Mongolia. Afterwards we visited a Buddhist Monastery, the National Museum of Mongolia, and had a little drive around the city.

Following dinner at an overpriced Indian restaurant, we all piled into one room for a farewell champagne viewing of Mulan. 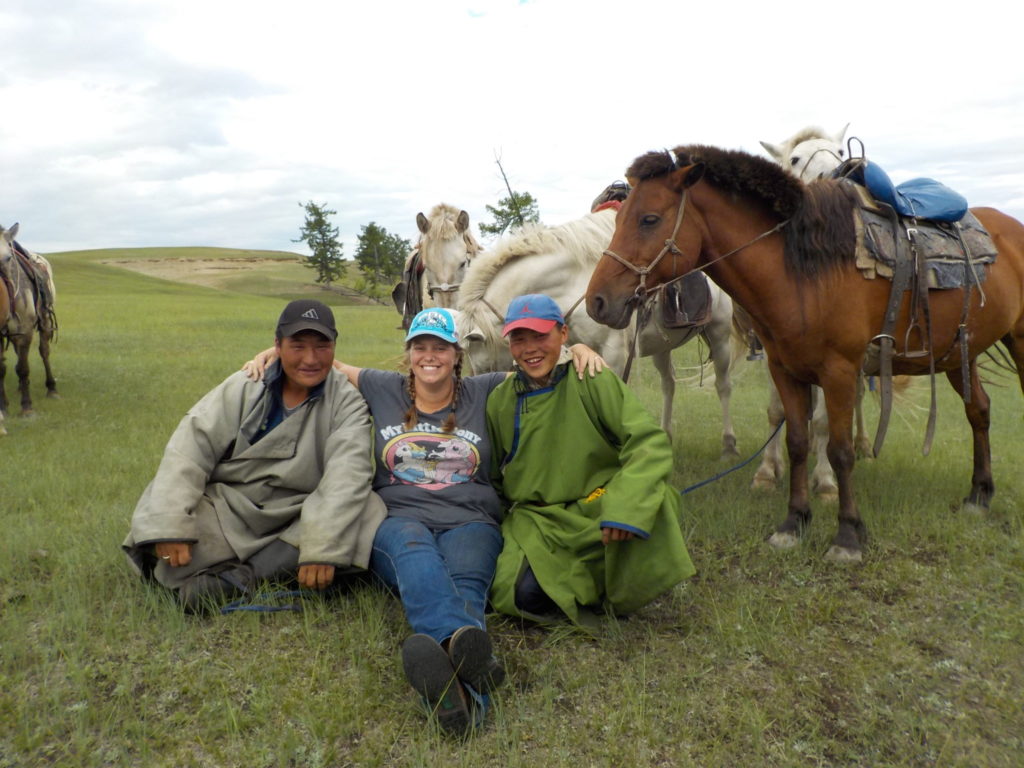 WOW, what a wonderful memoir Stacey has as a keepsake of her Mongolian adventures. Such vivid descriptions and cultural remarks, we thank Stacey for allowing us to share this with you! If you want to find out more about the globetrotting holidays we offer in Mongolia, click here.