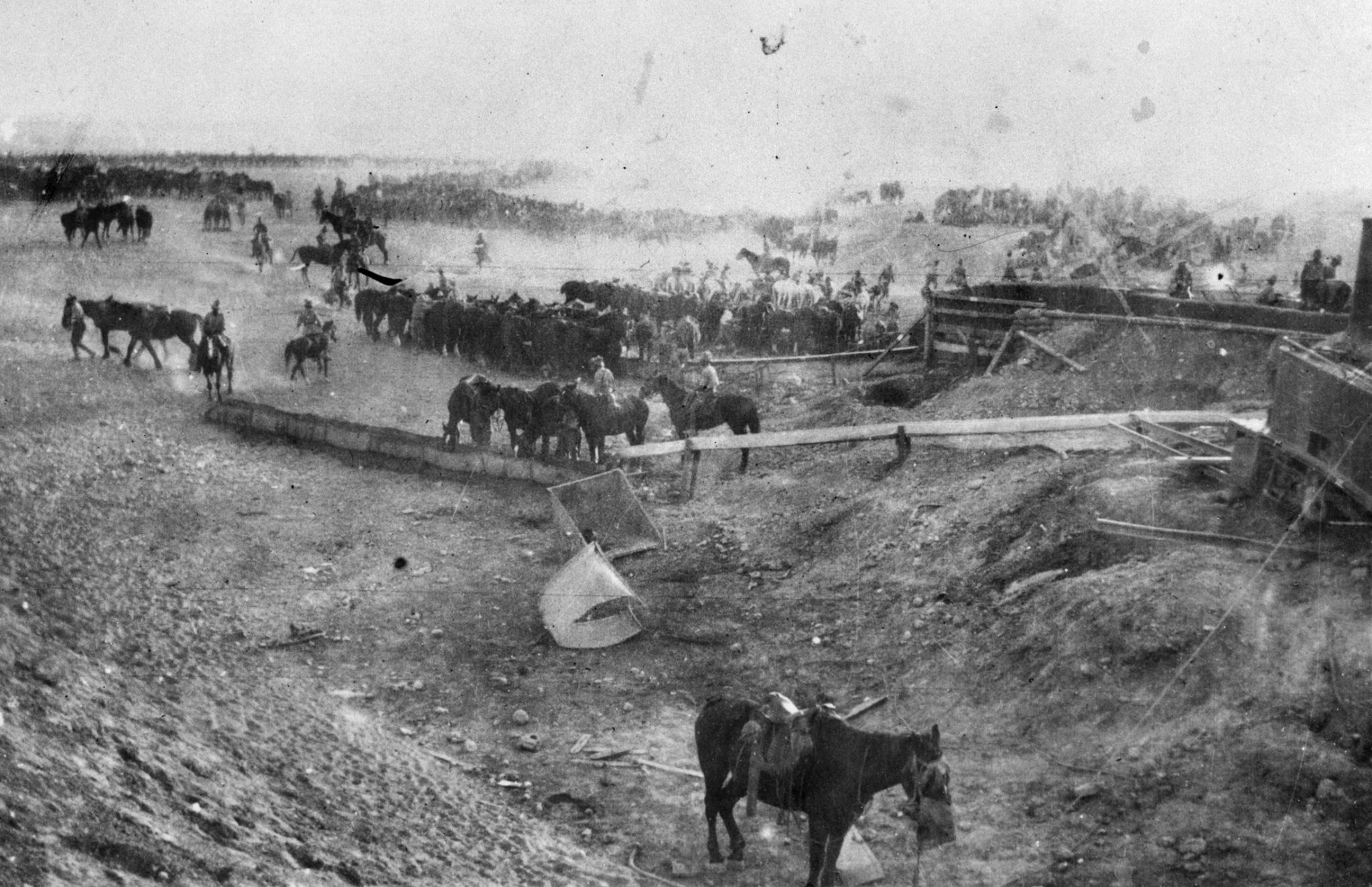 On the 31st of October, 1917, the Fourth Australian Light Horse Brigade charged the city of Beersheba in what was then Ottoman Palestine, storming through the Turkish defences. This is widely remembered as the last great cavalry charge. It resulted in the capture of Beersheba and, ultimately, victory for the British Empire’s allied forces in the third Battle of Gaza.

Since early 1916, the British Empire’s allied troops had been battling with Ottoman and German forces to win ground in the Sinai and Negev deserts. They had already tried to take Gaza twice, and having failed, turned instead to Beersheba. If they could take Beersheba, then Gaza, Bethlehem, Damascus, Aleppo – every strategic position in those vast, harsh lands – would fall to the allies. 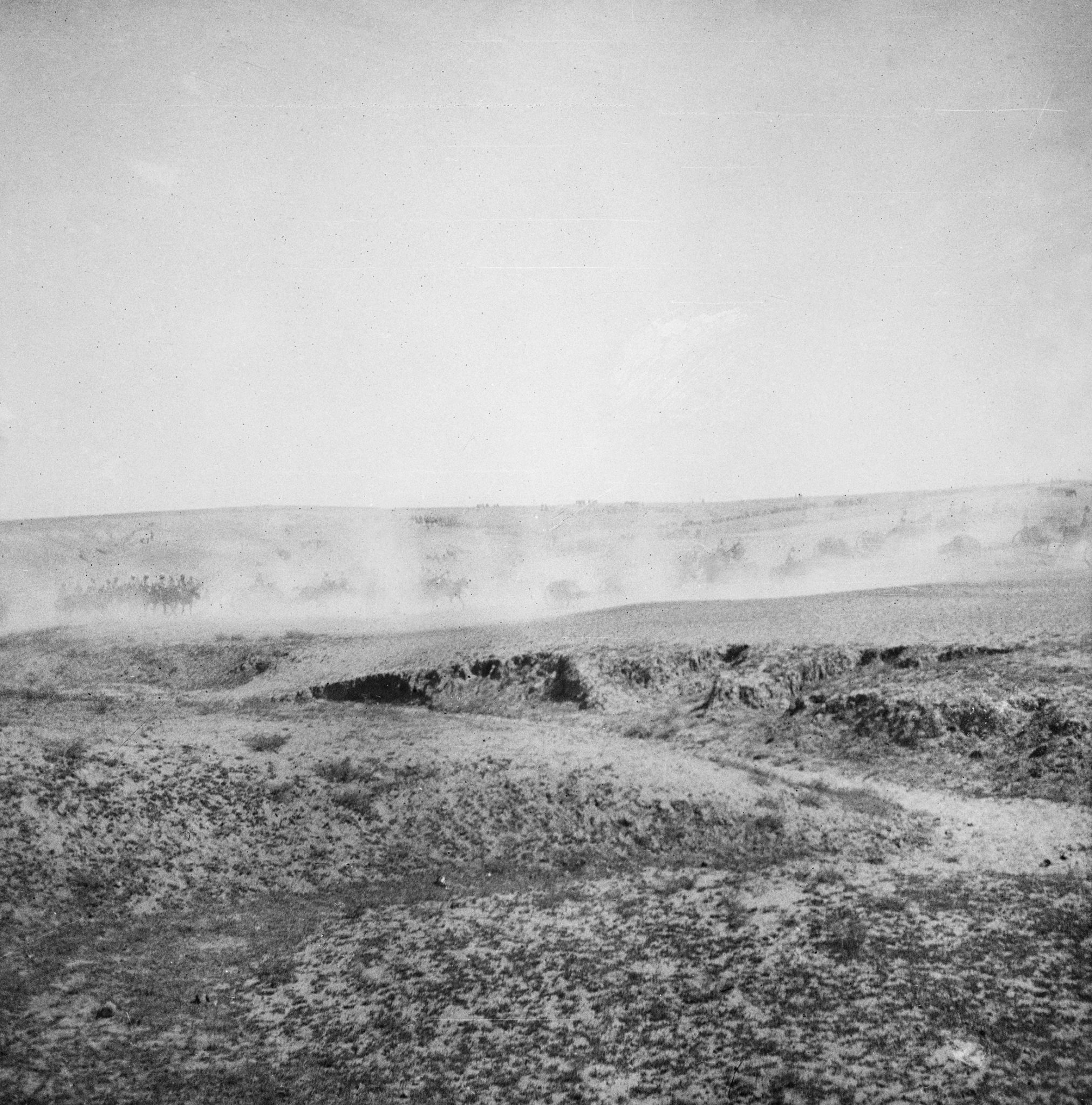 To keep their intentions hidden, most of the Infantry remained at Gaza until the night before the battle. Overnight, about 40,000 allied troops travelled more than 40 kilometres to Beersheba. The road was not just long, but incredibly dusty – in the above photo, the line of cavalry is only just visible through the haze. The horses carried packs that weighed around 120 kilograms. Some of the light horsemen had been marching for days prior in order to reach the battle, and had no chance to find water before the night march. They knew that they had to capture Beersheba, and had to do it in one day: a single day’s worth of water had been hard-won from disused wells in an ancient town nearby. If the Ottoman forces didn’t kill them, thirst certainly could. 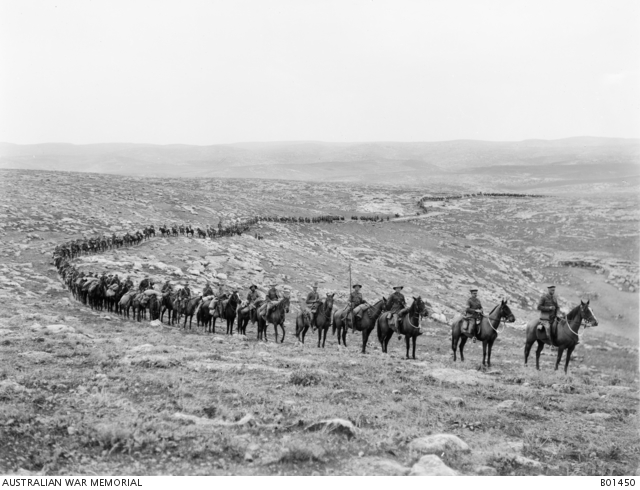 On the morning of the battle, British forces supported by artillery attacked the Turkish defences from the West and South. By mid-afternoon, the Turks had been driven from their trenches, but they still held the town and, most importantly, the wells. The ANZAC and Australian mounted forces had a combination of infantry and cavalry characteristics, and were known to attack by galloping their horses into the fray, then dismounting to fight on foot. With this knowledge, and the approach of nightfall at the forefront of his mind, Lieutenant General Harry Chauvel ordered the 4th Light Horse Division to make a mounted attack on Beersheba.

With the 12th Light Horse on their left and the 11th Light Horse bringing up the rear in reserve, the 4th Light Horse moved off at a trot before breaking into a gallop, mounting the ridge and charging down the long slope to Beersheba. The Turkish gunners opened fire with shrapnel, and machine guns fired at the leading squadrons. Luckily, the Royal Horse Artillery soon ended the machine gun fire. The Turks in the trenches, expecting the Light Horsemen to dismount as they always did, were caught off guard by the unchecked pace of the galloping horses and couldn’t adjust their sights quickly enough, firing harmlessly over the heads of their enemies. Armed with only rifles and bayonets, the 4th Light Horse galloped on. Trooper Edward Dengate wrote that ‘some of the chaps jumped clear over the trenches in places, some fell into them, although about 150 men got through and raced for the town, they went up the street yelling like madmen.’ With some divisions dismounting to seize the trenches and some racing on to Beersheba and the water wells, the charge was over and the town captured in just an hour.

Because they managed to take Beersheba so quickly, the retreating forces did not have time to destroy any resources, and the allied forces found it essentially intact, with full stores of fodder, equipment, tools and food. Many vehicles, horses and bullocks were also gained. 58,000 men and 100,000 horses descended on the town, gulping down 1.8 megalitres of water. 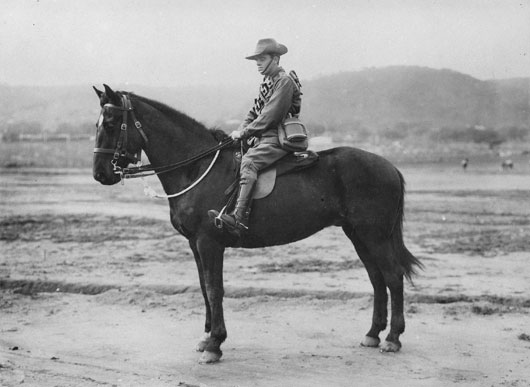 Of the 800 men in the charge, 31 were killed and 36 wounded. At least 70 horses died. Hundreds of Turks were also killed. By capturing Beersheba, the British Empire forces were then able to break the Ottoman line at Gaza on the 7th of November and advance into Palestine.

The charge at Beersheba has become an important part of Australia’s history and cultural identity. The Australian and ANZAC mounted divisions were truly instrumental in the battle and victory could not have been achieved without their courage and sacrifice. The Battle of Beersheba was also a vital tipping point in the First World War, breaking the Ottoman defenses and allowing many more important posts to be captured. Two films, Forty Thousand Horsemen and The Lighthorsemen, have been made based on the battle.