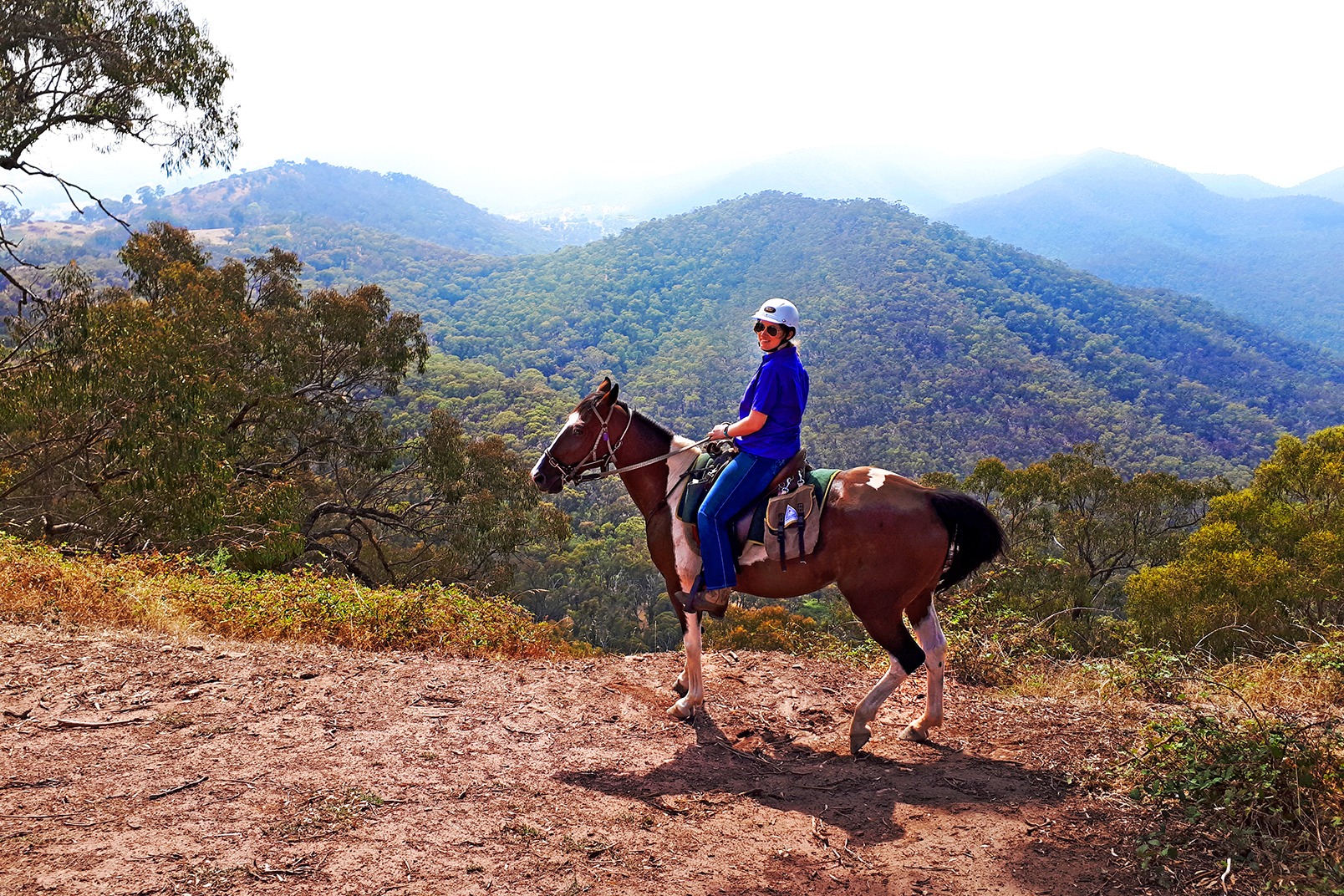 We knew we had to learn more about Ellenor Nixon when we found out she’d booked her second Globetrotting holiday before even finishing her first! This lifelong horse lover begged and borrowed horses to ride from her early childhood onwards, and has always been a keen traveller – so it’s really no surprise that combining these two passions in one holiday turned out to be a stroke of genius! Read on to learn more about Ellenor, and just what made the Howqua River Ride so very special.

What is your day job?
I work as a classifier of films, games and publications for the Australian Classification Board.

How have horses influenced or changed your life?
I was the horse-mad kid from the moment I could pronounce the word. Although I didn’t have a chance to be involved with them from a young age, I was partly sated by an endless stream of pony books and I begged a ride on any horse at every opportunity, sometimes getting to borrow one for several blissful months at a time before I’d come off and injure something. Riding fell by the wayside during high school as I had to commute two hours every day. In 2012, I rode on the equestrian team when I was on exchange at the University of Wyoming, reigniting my passion for horses and agriculture. Since early 2018, I’ve had a riding lesson once a week in Sydney (after an initial hiccup where, true to form, I came off and hurt myself).

What is your earliest memory of horses?
I get my love of horses from my grandfather and mother. Some of my earliest memories of horses are watching Westerns on my grandfather’s knee and being taught pedigrees of champion racehorses while we watched racing carnivals on television. My earliest encounter with a real horse that I can recall was with Nugget, the little bay pony who was giving pony rides at Oakdale Farm near Nelson Bay, where my 4th birthday was held.

What was your childhood pony called?
My family’s one foray into horse ownership was the glorious Jewel, a 15 hand high Anglo-Arab who, despite early indications, turned out to be completely inappropriate for an 8-year-old beginner. She ended up spending about 18 months as a stunning garden ornament, galloping up and down fencelines with her tail flagged while keeping company with the quieter, more relaxed Stock Horses that I continually borrowed from family friends. She became a great polocrosse horse for an older, more experienced rider before producing several foals. The Stock Horses were called Dayarna, Verlita and Kahlua, all beautifully mannered and more skilled than me at mustering our cows. 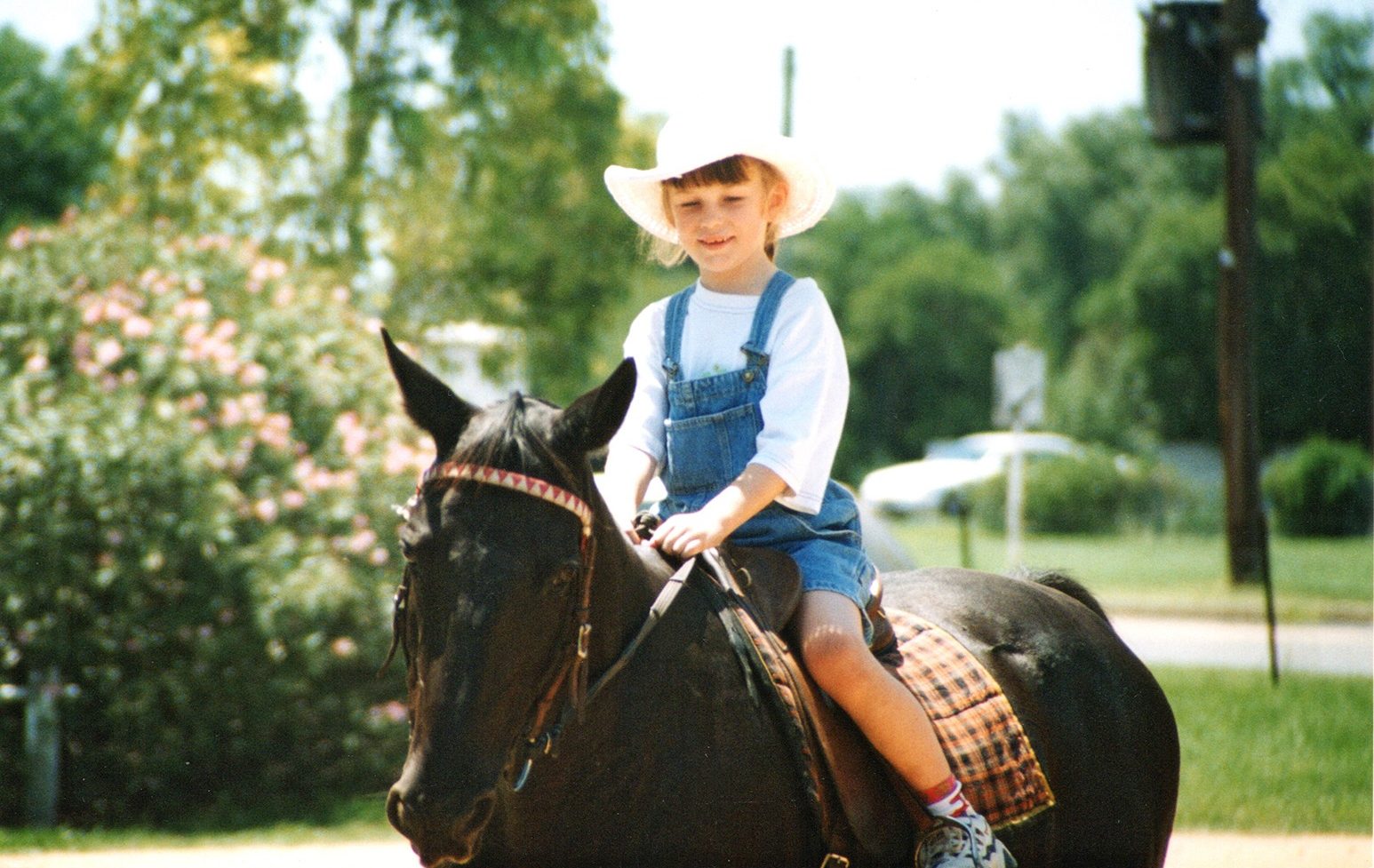 What does riding or being with horses mean to you?
I couldn’t do my job without horses. We occasionally see some… interesting things as classifiers and I find horse riding therapeutic, as I need to be present and focus on me and my horse in the moment. I hang around the stables after my ride just to get an extra hit, walking, washing and feeding the school horses.

What have horses taught you the most?
Patience, teamwork, courage and persistence.

Was this your first Globetrotting ride?
Yup, the Howqua River Ride was my first ride. We had amazing weather, not too hot, and even got caught in the rain, making us all look very professional in our oilskin coats.

What made you take the plunge and sign up for a Globetrotting holiday?
I had been to a Globetrotting information night in Sydney ages ago and mentioned Globetrotting to one of my friends, who was super keen to go on a tour as well. I started keeping an eye on the Australian rides, which had all of their available dates fully booked. As soon as I saw some saddle seats open up on the Howqua River Ride, I leapt at the chance, booking while on the train to work. Unfortunately, my friend couldn’t do those dates, but I was determined not to miss out.

Was this Globetrotting ride celebrating or marking a significant moment/milestone/achievement in your life? And if so, would you mind sharing?
Nothing significant. I’d been following Globetrotting for several years and just decided to take the plunge, solo as it turned out when a friend couldn’t go as well.

Which Globetrotting rides have you since completed/planned/dreamed about?
I already booked my next trip! I actually booked it while having dinner at the Kevington Pub on the last night of the Howqua River Ride. The best part is I’m going with some of the riders from the Howqua trip! We’re going on the Glenorchy Back Country Ride in New Zealand in February 2020. 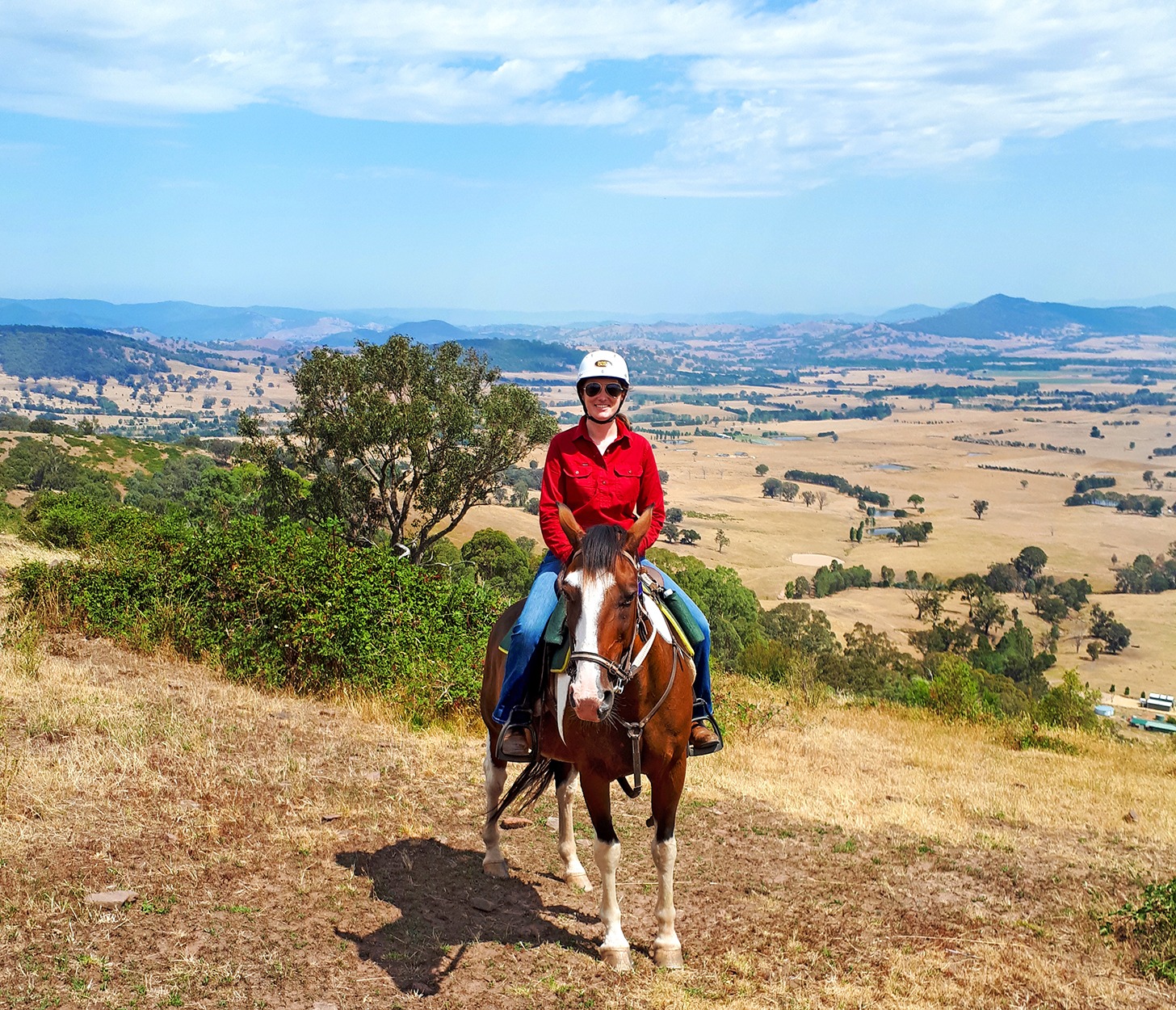 Why choose this type of travel? As in exploring a new country from the back of a horse?
I’ve been incredibly lucky to travel quite widely and have managed to sneak in a half- or one-day trail ride in most of those places, including Iceland, Canada and New Zealand. The next logical step was to spend several days on horseback, exploring at a slower pace than driving usually allows. I love being outside and meeting people who love the outdoors in various exotic locales.

What is your most memorable Globetrotting moment?
How can I choose a single moment? I learnt to canter on this ride, making the entire trip thrilling (Mum says I used to canter, unhappily, as a child but I have no recollection of this so we’ll call it learning to canter). I loved winding quietly through the bush as much as splashing through the dozens of river crossings. The food… the people… the horses… It was just the best week ever.

Who is your favourite trail horse of all time and why?
This was my first trip so I can’t go past Boo, the pinto Standardbred I rode all week. Willing, reliable and careful, he never put a foot wrong and was a testament to Michael’s ability to match horse to rider.

A tip that every globetrotter should know before going on a ride…
Be brave. Do that solo trip. Try that faster gait. Jump that little log.

Finish this sentence: Don’t leave home without…
A sense of humour. Also sunglasses, as I learnt for the first and only time when I wasn’t wearing them while cantering at the back of the group.

If Ellenor has inspired you to follow her footsteps (or rather, hoofprints!) check out all the details on the Howqua River Ride in the spectacular Victorian High Country, Australia.

EDIT: Since doing this Q&A, Ellenor has lived out her Glenorchy dream, and this is what she had to say about it:
‘It’s been a hot minute since I got back from Glenorchy in February. The memories are still making the days at the office tough to take. There was no way to prepare for the epicness and truly unique experiences that bound together our group of intrepid Globetrotters.
We arrived after over half a metre of rain had fallen. Nonetheless, as rain threatened to drown out Deana’s voice in the tack shed, she offered us two options. Option A was to ride. I guess we’ll never know what Option B was. If we were allowed on horses, we were getting on horses! The next several hours were spent trekking along the edges of the swollen Rees River. Our guides, Jess and Shaun, never wavered and our horses never put a hoof wrong. My fellow globetrotters also deserve a round of applause. My trusty steed, Beer, who is famous among globetrotters, never hesitated, even when the water rose midway up his shoulders. We were kept super comfortable at Camp Glenorchy as the weather set in that night. The next day was wet and flooded, with some of the houses in Glenorchy being evacuated, but day 3 dawned bright and beautiful, as though the rain had never happened. We rode 21 kilometres and climbed the equivalent of 250 flights of stairs, and the horses got a well-deserved massage when we arrived at the shearing shed bunkhouse.
Day 4 had a lot of river crossings, with Shaun and Jess carefully picking our path. We got a real indication of the extent of the floods, looking at grass and sticks caught in fences far from the river. We rode into stunning Paradise in the afternoon and explored the trust’s property before dinner, gazing down the valley to some recognisable landscapes from many movies.
Day 5 was the one day when we were able to stick to the itinerary. We rode past several new landslips on the Dart River side of Mt Albert before an amazing long canter along the flat by the river.
This trip was unique and unrepeatable. I loved every minute and I’d love to do it again.’ 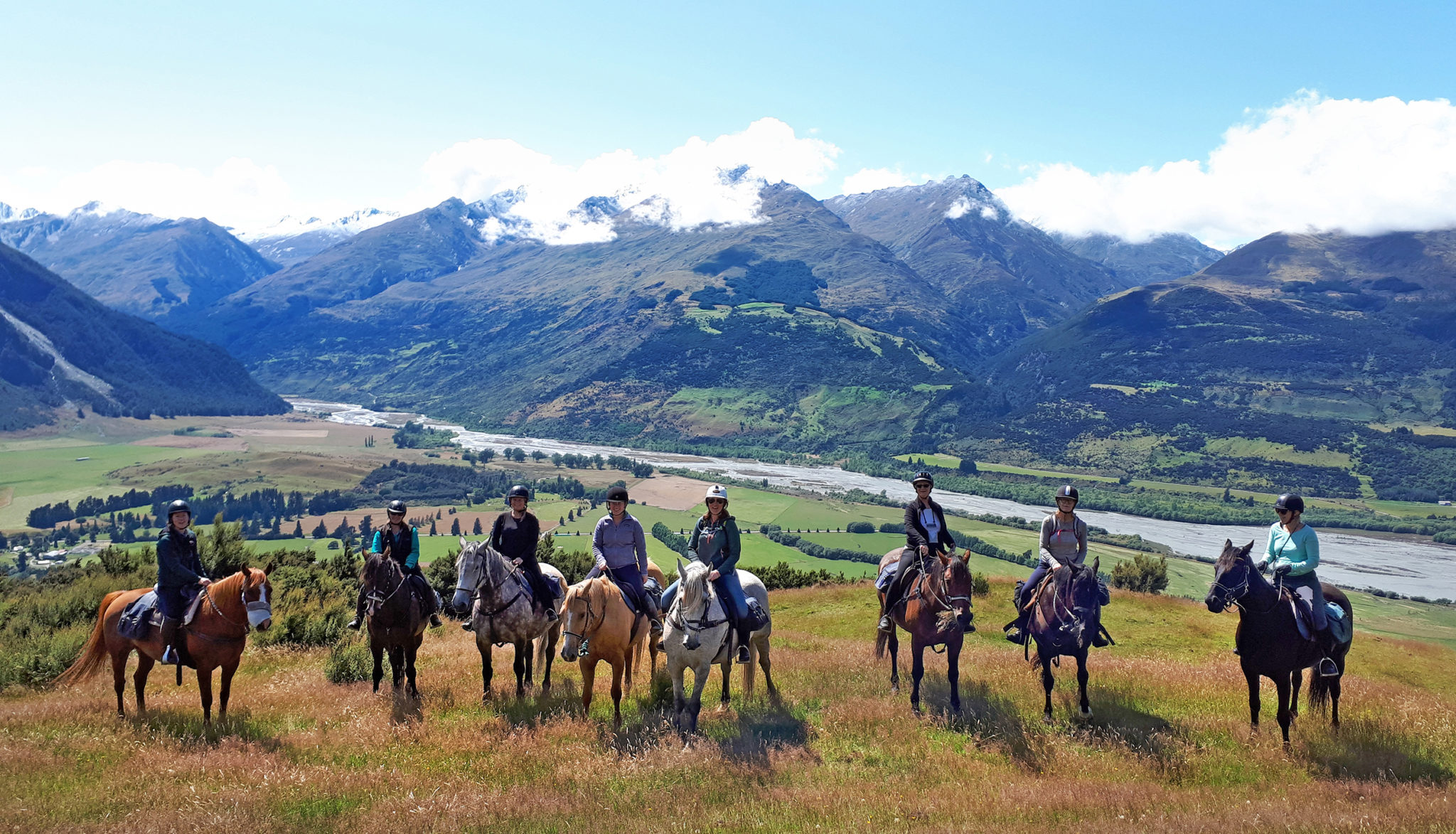