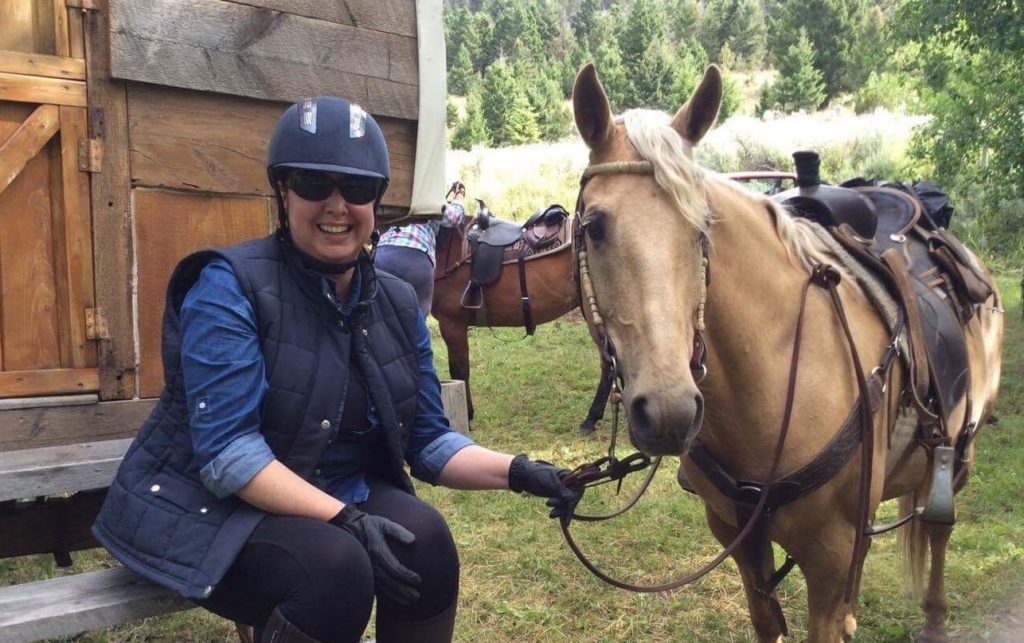 *Update* Sadly, our wonderful hosts in Montana have taken a step back from hosting guests and we are unable to offer the Montana ride anymore. We do, however, have a wonderful ranch ride in Shell, Wyoming, and for adventurous souls there’s the Big Horn Cattle Drive.

So globetrotter Louise Hunt has taught me a new word – ‘freedult’. Have you heard that word before globetrotters? Apparently it’s that time in your life when all your children have grown up, flown the coup and are now forging their own paths, and you suddenly find yourself free to do some of the things you might not have been able to do earlier. Well, it turns out Louise decided to kick-start her ‘freedulting’ with a globetrotting adventure in Montana, USA and she can’t stop RAVING about it! I think she’s still on cloud nine, you can’t wipe the smile off her face and we couldn’t be happier for her. Here we find out more about Louise and the story that led her to become a globetrotter. Oh and you’ll want to read about her most memorable globetrotting moment…let’s just say it involves three Aussie women kicking butt in the sport of team penning!

What is your day job?

How have horses influenced or changed your life?

I grew up on the NSW Southern Highlands as a town girl, always dreaming of horses but never allowed one, my mother despairing of me when I wasn’t interested in sports or joining groups…the Girl Guides phase was awful. A family friend finally went into bat for me and suggested I go and have riding lessons at Throsby Park Riding School with her daughter.

I did a lot of falling off in those early days and Del Throsby always said, “Falling off is lucky, and you can claim that piece of ground.” I own a lot of Throsby Park. Del was an inspiration and every Christmas she would give you a Christmas card that had an ink drawn picture on the front of the Throsby homestead and inside was a Christmas greeting from Del and your regular horse, in my case Jive, a lovely jet black gelding. Those memories have shaped and guided me, made me stronger and more determined and although I would never own my own horse until I was an adult, I continued to ride and even achieve. 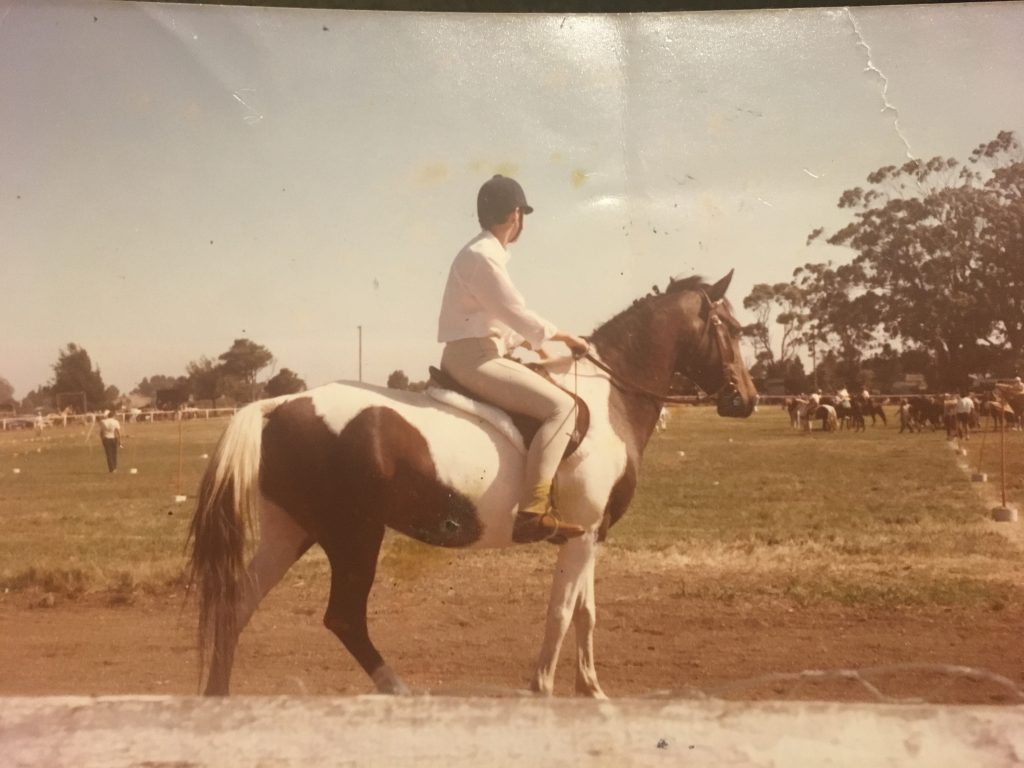 What is your earliest memory of horses?

My earliest memory of horses were the mares and foals over the back fence. Our backyard boarded the property of the local vet, horse breeder and author, Alan Chittick – they were beautiful horses, I’m sure destined for competition. In my teens, I was lucky enough to do work experience with Mr Chittick and assisted in many procedures, including a horse castration, stomach drenching and many injections, exciting things for a horse mad girl.

What does riding or being with horses mean to you?

Horses are a part of my identity. I have been someone’s wife, my kid’s mother, my brother’s sister and my parent’s daughter but when I’m riding or I’m with horses and horse people, I am most definitely Louise, it distinguishes me from others. It also gives me a sense of peace and I’m always happy on the back of a horse, doing my own thing. I can be on my own or riding with others, but the horse beneath me is enough company and my escape.

What have horses taught you the most?

Horses have taught me strength and determination. If I wanted to have anything to do with horses, I had to make it happen my own way because no one was going to help. I guess courage as well because I did a lot of things on my own. Stillness and patience were things I learned through practice and learning from my mistakes. I think stillness is the ability to just be with your horse and let the horse be with you – that was the hardest lesson to learn, you don’t always have to be on a mission. 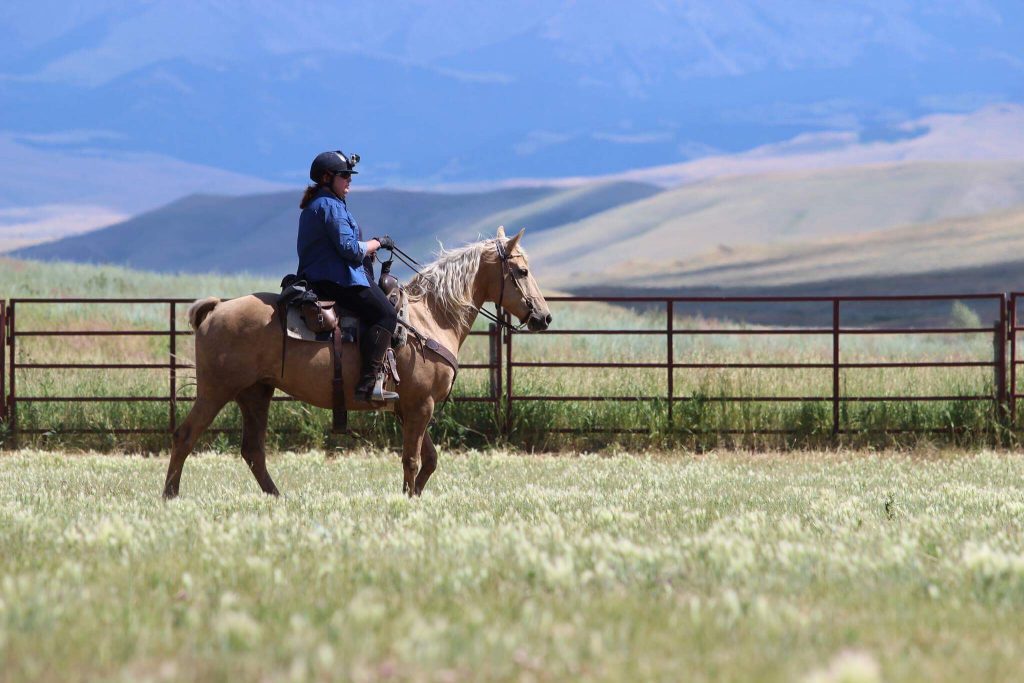 What was your first Globetrotting ride?

I’ve just returned from my first ride at the incredibly beautiful ranch in Montana, USA.

What made you take the plunge and sign up for a Globetrotting holiday?

I had reached that stage in my life…I’ve recently heard the stage referred to as ‘Freedult’…when my youngest turned 18 earlier this year. I had a good job so I could afford it and I had been threatening my kids for years, that when they had finished school, I was running away from home. Well the youngest is still doing his HSC this year but I had been following Globetrotting for a while and when the promo videos appeared for Montana and Wyoming, I decided now was the time to start my Freedult adventures and what better way to start than on the back of a horse.

What Globetrotting rides are you wanting to complete?

I think the next ride will be local, I’m not sure yet but I do like the sound of playing some Polocrosse in WA [the Margaret River Ride]. I like to actually do something so, anything to do with mustering or, if it comes to fruition the camp drafting and if by some chance the Barossa Ride is offered again, well it’s always nice to combine a little wine tasting.

What is your most memorable Globetrotting moment?

It’s a matter of Aussie pride. Three Aussie girls in Montana holding up the flag (figuratively) for the country – a battle of skill and speed and some well worked-out tactics to beat the Americans, the UK and the Israelis in the sport of team penning. Our new friend and long time globetrotter Julie Kerr, my best friend Linda Pinkerton and myself faced the unknown but we knew one thing, we had to beat the Israelis! Let’s just say it was a matter of not just Aussie pride but very much Feminism and proving we’re equals, if not supremely better and you bet ya, we whipped their butts with cunning and tactics as only women can.

Three small heifers didn’t stand a chance against our intellect and a quiet word in their ear. We won in 2 mins 30 sec, beating the Israelis by a whopping 3 mins and yes as you can imagine, “Aussie Aussie Aussie, Oi Oi Oi!” was bellowed at the top of our lungs. 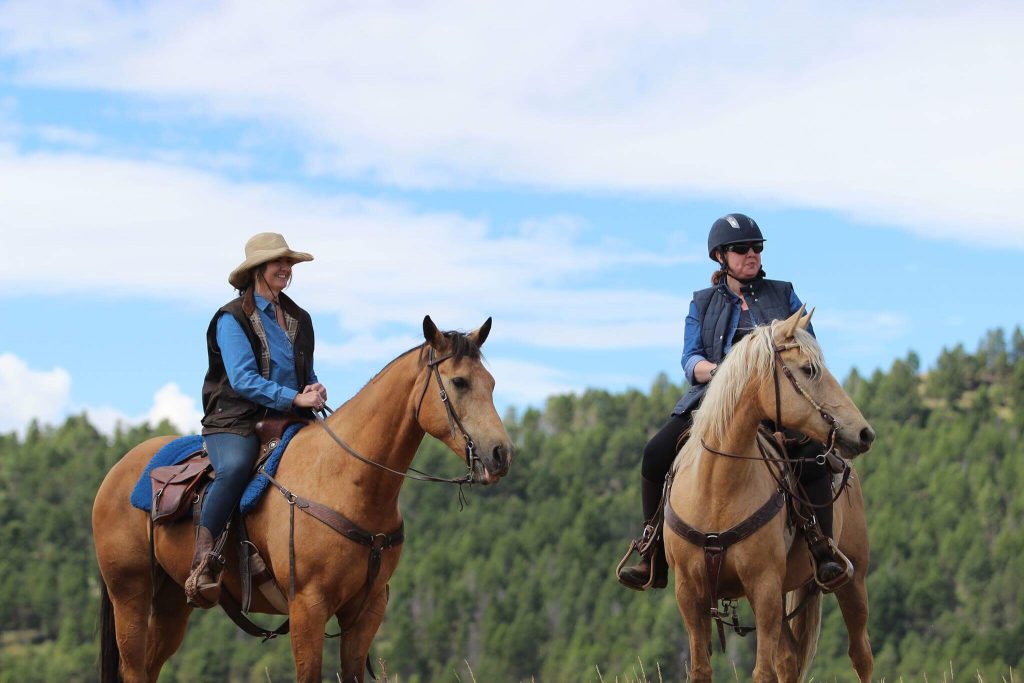 Who is your favourite safari horse of all time and why?

Well obviously it’s the one and only Bianca, the stunningly beautiful palomino Tennessee Walker, with the uniquely gaited four beat running-walk. Bianca has a big bold personality, with your typical mare moods but her nature is sweet. One of her little quirks would be to turn her head and rest her nose on the toe of my boot, for a scratch, and I trusted her completely. Comfortable to ride and surefooted, she took me in whatever direction I pointed.

As far as bucket list horses go, I’ve certainly ticked this one off. I can also add to that with driving a team of Percherons, two beautiful black fellows named Joe and Jim. I never imagined the adventures that awaited me in Montana. It was a hell of a first experience.

A tip that every Globetrotter should know before going on a ride?

This tip relates specifically to Montana. The day we rode up the Crazy Mountains, we were up 8100ft above sea level and the altitude affected me by having my feet and ankles swell, so if you’re prone to this during flights, wear compression stockings.

A good camera. I just used my iPhone which was fantastic as it just slipped into the pocket of my Kerrits, but to have something memorable and frame worthy, something a little better is required and if Globetrotting is going to become the addiction we all know it is, then it’s worth the investment.