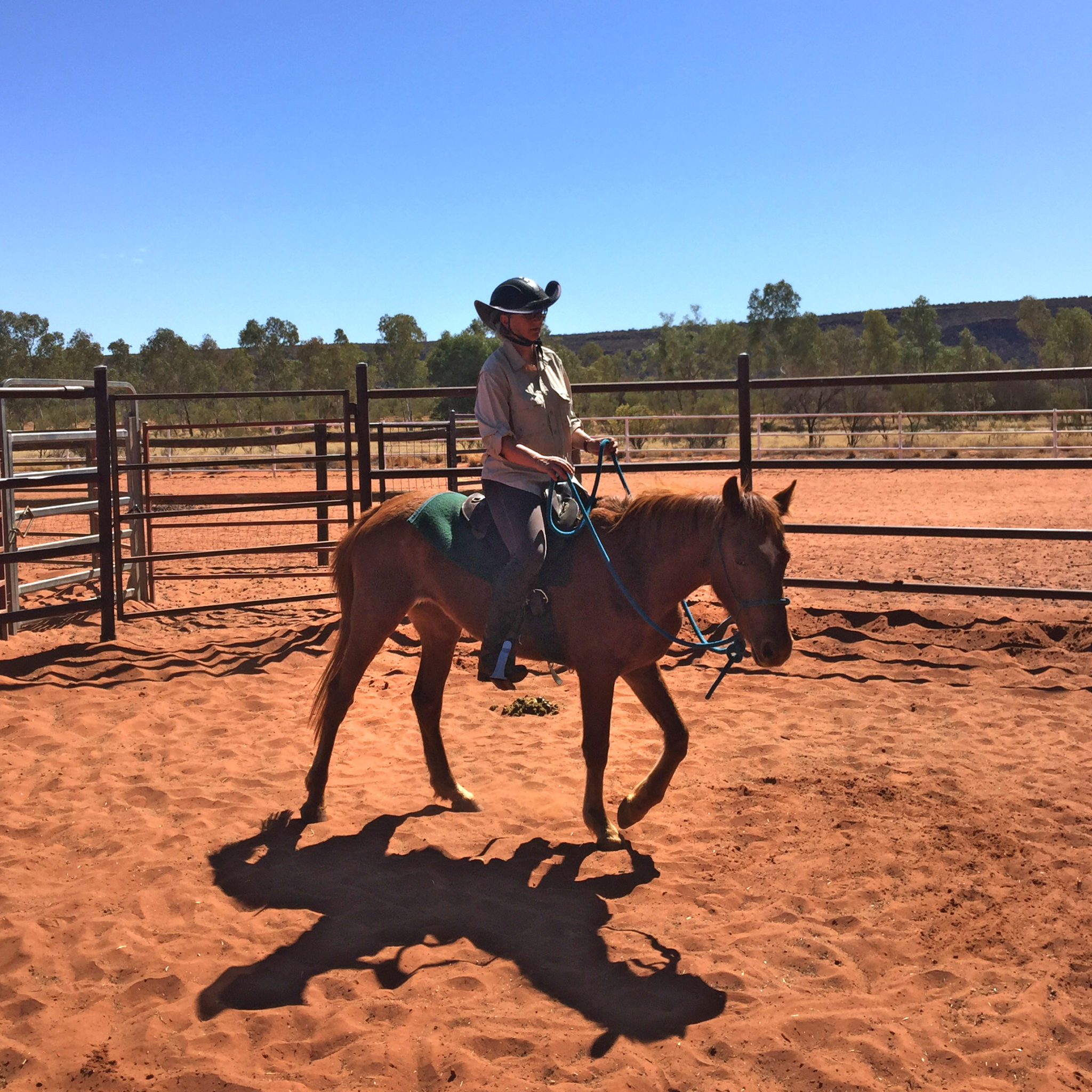 Penny Richards has just returned home with her very own brumby after completing our debut Desert Brumby Safari. She took the time to tell us all about this incredible experience, what led her there and what she and her brumby have been getting up to since.

What is your earliest memory of horses?
I can’t say that I actually remember this, but apparently I once wandered off as a toddler (around the age of two) and Mum found me in with the horse next door, feeding it one blade of grass at a time.  I also remember begging my dad for a horse when I was very small and practising my ‘riding’ on my brother and cousins.  They drew the line at wearing a saddle and bit… not sure why.  My first riding experiences were through a riding school on a wonderful draft horse called Debbie.  I used to get in trouble at pony club for my girthing procedure.  I would hold the girth at one side of Debbie and then walk under her belly to the other side to fasten it.  My first horse was called Charlie; a little dapple grey pony around 10 hands high. We did some shows and lots of pony club.  Horses were my first love.

What does riding or being with horses mean to you?
My horses and my dogs are a part of my life that I could never do without.  Every morning when I rise I go out to my boys (and now a girl too!), say good morning and give them their breakfast.  The two boys know where to stand to be fed.  I put their halters on and hitch them to their spot on the rail so Cowboy won’t steal Zammy’s hay, and now Dindi follows me to the round yard to have hers.  Every night they get their dinner and I spend an hour or so with them.  Sometimes I don’t have time to ‘work’ with them but I make sure they are brushed and their feet cleaned out.  I would say this is my ‘third space’ where I transition from work to home.  They calm me and make me happy.
Riding is the best feeling on earth!  Either chilling on a nice long slow ride and taking in the smells and beauty of the bush around us or galloping full speed up a rocky hill, you just can’t beat the feeling of such an amazing animal carrying you along.

Of all the horses in your life, is there one who is/was especially important to you?
I would say I have had a bond with all the horses I have had in my life, all at different levels.  There was one little appaloosa mare that I loved dearly as a teenager.  Her name was Chicky (short for Boatdeck Chiricahau). I spent from sun up to sun down most weekends and all school holidays with her.  She would double a friend into town through traffic without batting an eyelid.  She was a special horse.
Now, I have a very fond bond with my daughter’s gelding, Cowboy.  He’s a beautiful big buckskin Quarter Horse and will do anything and everything asked of him.  I have a love/hate relationship with my little Arab, Zammy (Newbury Z’aim), who is so much fun to ride but can be wilful to say the least. I am developing a bond with Dindi (Dindima), my wild little brumby.  I am hoping she will be the best yet!

What’s the biggest lesson horses have taught you?
Horses have taught me many things.  To be calm, patient, firm and consistent with everything I do.  They’ve also taught me that when I think I know something, I really don’t!! They are mind readers and pick up everything you think and feel.  Most of all they are honest and will never show false feelings.  You know exactly when they are happy, sad, angry or scared.  I wish more humans were like that!

What drew you to the Desert Brumby Safari?
I spent a week on the Snowy Mountains at the beginning of this year and rode near the brumbies there.  I was amazed at their beauty and how close we could get to them. I also love endurance rides and have done some workshops with barefoot trimmers.  Jen Clingly and Jeremy Ford showed me a film about the desert Brumby, presented by Chris Pollitt.  The opportunity to meet him and see the desert horses myself was too good!  Also being able to bring my own brumby home – wow, what an amazing opportunity! I’m hoping one day she may take me through Shazada, or who knows, maybe the Quilty??

How did your expectations compare to the real thing?
It’s not very often you can say that a holiday exceeds your expectations but this one certainly did!  I went to Kings Creek Station not really knowing what to expect.  The trip there was amazing in itself!  Brian and Anna’s knowledge of the area, including the plants, wildlife, history and knowledge of the people who own the land filled me with awe and a realisation of how little I know and how often I travel through an area without ever really ‘looking’.  Things just got better from there!  Brian and Anna taught me more about horsemanship in that week than I think I had learned in all my life.  So many light bulb moments.  I had been given the information before but it didn’t really ever make sense until now.  We all have horses that we buy that are already broken in and we expect them to just do the right thing!  I would say every person who seriously cares for their horse should learn how to start a new horse to truly understand the basics.
Then there was Kings Creek Station. Ian and his staff are absolutely amazing!  We were looked after beautifully and his knowledge of the Country is spellbinding.  His stories gave me an understanding that I have never had of Indigenous people and has made me want to learn so much more about their culture.
Brumby Week.  Wow, so much information, I thought my head would explode!  I learned of the brumbies, their behaviour and habits, their history.  I learned of the ecology of the area and the studies that have been done around the effects of the feral horses.  We walked the Canyon, which in itself was incredible.  There were lectures from experts from the USA on the American Mustang.  We had bush poetry and singing around the fire.  I really did not want to leave.

Tell us about your journey with your brumby so far.
Dindi and I formed a close bond so much faster than I ever expected at the Station.  She was quiet and scared to begin with and didn’t move around like the other horses.  Brian and Anna encouraged me to go with this to get in close to her early.  We had a halter on her by the second day and a saddle by the third.  She was also loading on and off the trailer easily.  I managed to ride her (sit on her really) on the fourth day and repeated that on the fifth.
The trip home was not good for my little brumby.  She arrived home angry and sour.  I managed to catch her straight away the first day, but when she didn’t have a halter on she would strike out.  This was mainly food related, i.e. she would strike to defend the food she was eating, so since then I have changed the way I catch her.  I always allow her time to eat her food before catching her and this seems to work well.  Since she’s been home I have caught her every day, brushed her, and done some ground work.  She has had her first barefoot trim.  I am hoping to reintroduce the saddle etc this weekend.  At first my horses did not want a bar of her, but now they are definitely becoming a band.  I love looking out the window and watching them graze together. 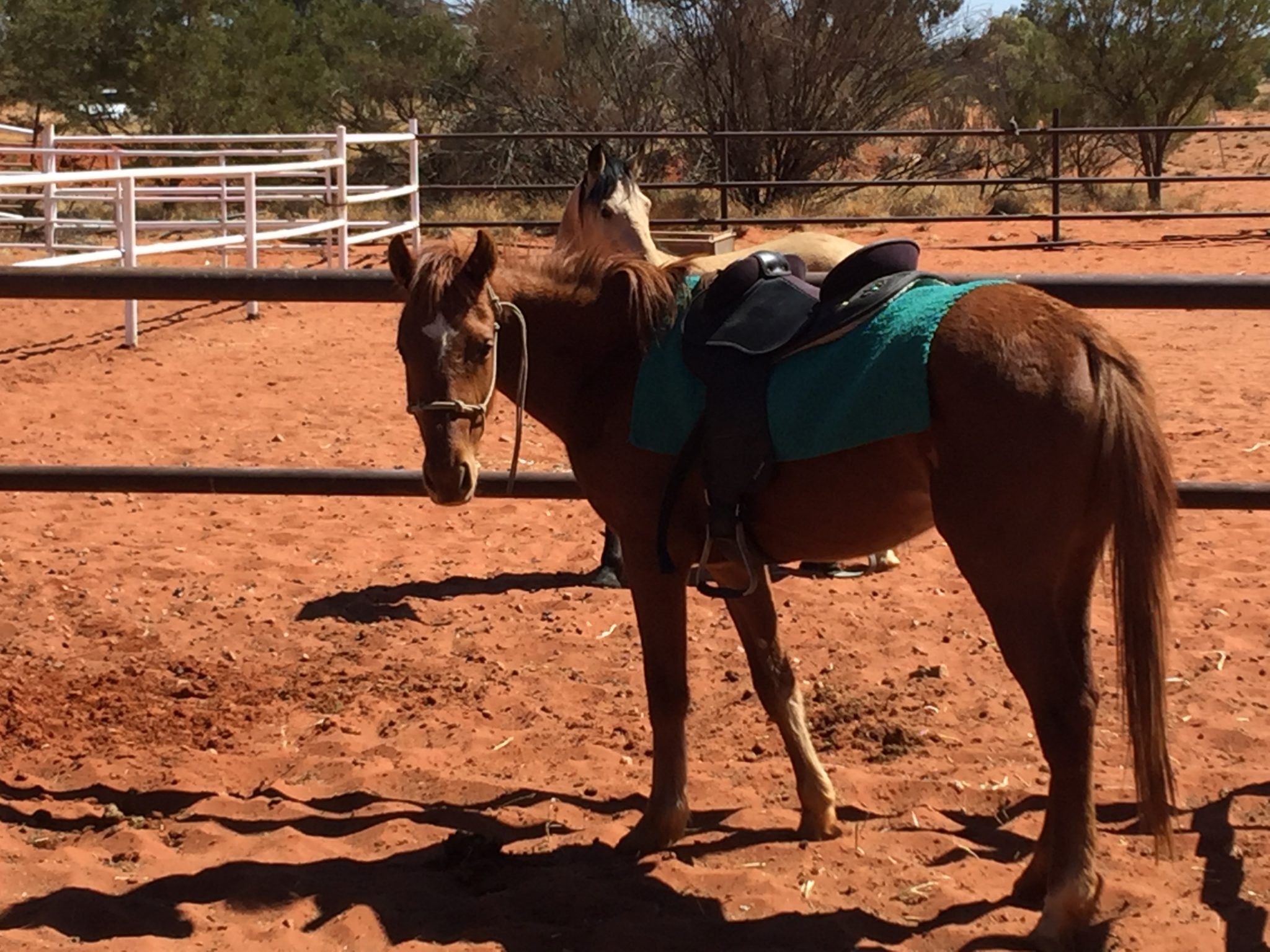 What has the biggest challenge been on your brumby adventure?
The biggest challenge was definitely bringing her home.  The horse transport person I had arranged to pick her up from the Station sent me an email a few days prior to pick up informing me that I would need to take her to a pick up point some 300kms away.  To arrange this with no mobile coverage and no local knowledge of the area was not easy!  I was very fortunate to have Brian offer to take Dindi and Mereenie (the other mare going to a new home) to be picked up.
Dindi made it to Melbourne with the first transport person with no problems whatsoever.  He was quite amazed at how well she loaded onto the truck each day.
I received a phone call from the second transport person who was bringing Dindi home.  He said she was ‘feral’ and that he didn’t know how he would catch her and put her on the truck.  After I explained that I had had no issue previously he seemed to calm down.  He also was offended by her condition as she was so poor.  Of course being a brumby she was quite thin to begin with.  The trip to Melbourne also worsened her condition.  They were feeding her green lucerne and hard feed, the same as the race horses were given on the truck.  A brumby lives on buffle and oat grass, so her poor stomach could not process the rich feed and I doubt she ate much on the way home.

What advice would you give to future Brumby Safari globetrotters?
I would highly recommend that anyone considering bringing a brumby home should perhaps bring their own transport or thoroughly investigate how the horses will be loaded, where the truck will take them, how long the trip will take, where they will sleep and what they will be fed. I would also recommend that you bring only bootleg jeans.  The spiky grasses and prickles get stuck in your legs if you don’t have them covered up!

Which Globetrotting rides have you since completed/planned/dreamed about?
This was my first Globetrotting ride and I loved it!  I would love to do the Okavango Delta in Botswana (I need to stop spending so much money on my brumby first!) and The Kimberley Ride.

Wowee! What an inspiring journey. Our heartfelt thanks to Penny for sharing her incredible story with us. If you’d like more information about the Desert Brumby Safari, check out the ride page here.